For at læse denne KYST 52 blog på dansk, se her

KYST 52 Again, the day was mild with little wind and a thick blanket of cloud. I met Steffan from the local TV station outside the Harbour Office, where I had arranged permission to walk around on the building site of the new harbour. On the sandy building site there was little activity, with most workers off until the New Year. It felt strange to sit and paint on a piece of land that didn’t exist when I started the walk a year earlier, and I was awed by the scale of the engineering project.

I returned my safety helmet, boots and hi-vis vest, and wandered around the rather desolate industrial harbour area, under the shadow of huge silos and smoke-belching chimneys. Older harbour buildings, fishing boats, buoys and nets were juxtaposed against the machines and structures of a modern harbour. 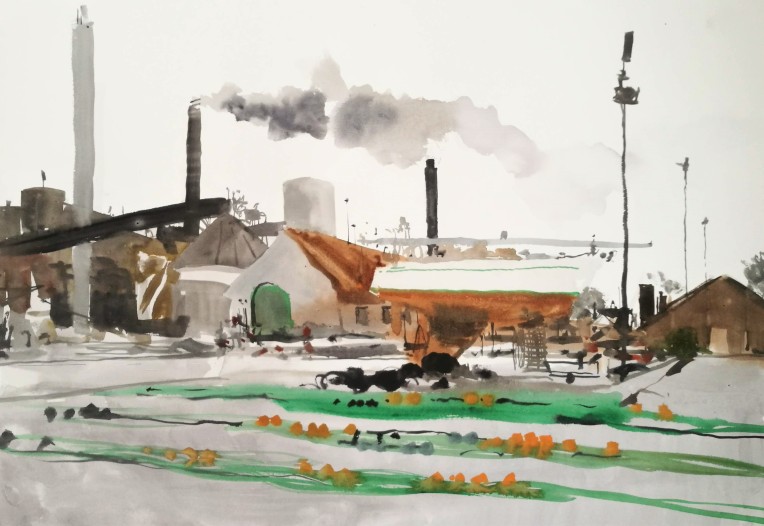 Looking north, the silhouetted spires and red roofs of Rønne were bisected by the masts and radio antennae of fishing boats. There was very little activity or noise, save the occasional whining hum of a passing moped, or the throaty croak of a Great black backed gull. 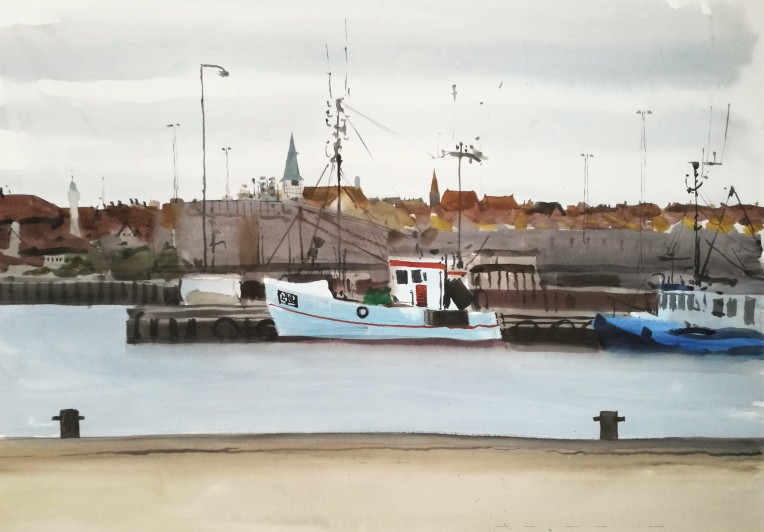 It was a melancholy day, and I was feeling numb and rather gloomy. I packed up and started walking towards the town, ready to set up camp and boil some water for my Pot noodle lunch, when I was hailed by some friends who had made a bar-b-q in preparation for my coming. A lovely surprise and I continued on in a much better frame of mind, helped no doubt by generous helpings of ‘honningsyp’, a warming local aperitif.

I walked onwards, towards the northern harbour arm with the town on my right. I paused on a small grassy patch, set up the M60 and painted my last view of the horizon, glimpsed between the welcoming arms of the harbour, under a dramatic cloudscape (see top)

I had hoped to paint the Tufted ducks that usually gather in the harbour, but they were nowhere to be seen. I turned my attention instead to the gulls and cormorants that adorned the various piers, platforms and wharves within the harbour, but I struggled enormously to really connect, my senses dulled by the alcohol. Just after I had finished packing up and was ready to move on, the Tufted ducks arrived. Time was running out and I had to hurry to get to the day’s destination and the KYST journey’s end and start point. 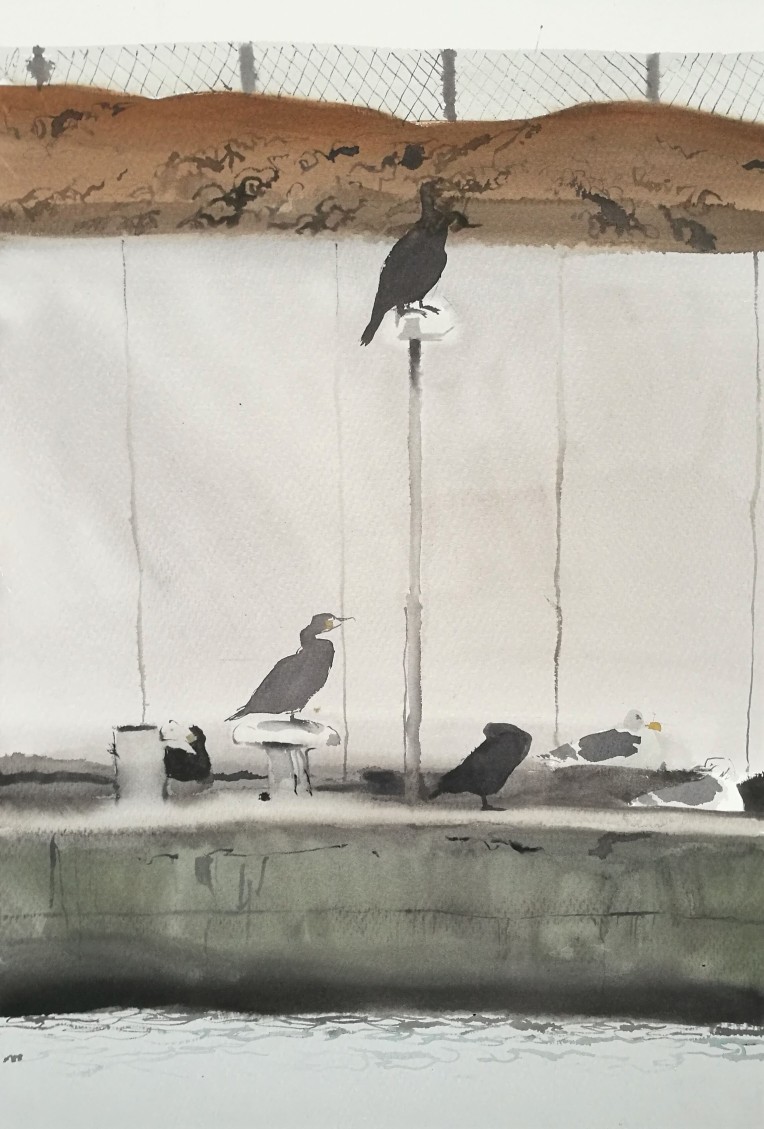 Steffan was waiting and I looked around the car park for a while, an underwhelming but strangely fitting place to end the journey. I felt no victorious surge of emotion, just a slight sense of detachment and numbness. I didn’t know what to paint and I recalled a similar sense of confusion that I had experienced almost a year earlier in the exact same place, when I had started the KYST project. Some young Mute swans arrived out of nowhere and I decided to make them the subjects of my last picture, rattled off quickly in the fading light. My wife and some friends arrived with champagne, some fireworks were somewhat miraculously lit at the over end of the harbour, and KYST was over.

Weather report = Cloudy all day. Temperature between 5°C and 6°C. Wind between  5 and 7 m/s from the northeast. Hours of sunshine: 0 hours.

Lessons learned – drinking and painting is definitely not a good combination.

Other stuff = The last two weeks of the KYST project have been carried out under the shadow of a keenly felt grief for the passing of my dear friend, colleague and mentor, Greg Poole – an inspirational artist, teacher and human being who will be missed greatly by everyone who knew him. Greg was an active supporter and advocate of the KYST project and would have been reading these words, had he not been taken away from us. The KYST book and exhibition that I will be working on next year will be created under the stewardship of his watchful gaze, as Greg lives on in my memory, but will be poorer for the lack of his ever present enthusiasm and wisdom.

In my head – Greg. The Pokerdudes. The end of the project.