For at læse denne KYST 48 blog på dansk, se her 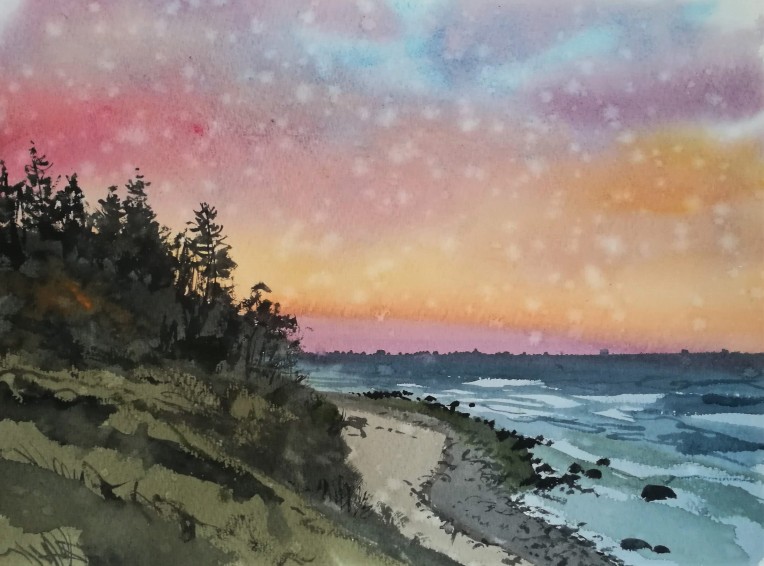 KYST 48 Warmly wrapped up in no less than seven layers of assorted clothing, I waddled down to the small beach hut where I had ended last week’s trip, straight into the teeth of a gale-force onshore wind. To the east, just behind a stand of pine trees, the rising sun briefly painted the thick layer of clouds with blood orange and crimson, before it was hidden completely – for the rest of the day as it turned out. As I struggled to paint in the gusty wind, it started raining (see above).

I packed up and made my way down to the beach, where the roaring surf tumbled onto the shore. Squadrons of gulls flew overhead, surfing their way along the coast in the headwind, while great flocks of rooks and jackdaws circled overhead. Otherwise there was very little birdlife; very little life at all, just the incessant pounding of the waves and the roar of the wind.

Soon I reached Homandshald, where I clambered over jagged and pockmarked hunks of reddish sandstone, deposited in a tidal plain during the beginning of the Cretaceous over 130 million years ago. Ever since Sose Bay, I had been passing through successive layers of geological time, through hundreds of millions of years, with each footstep taking me closer to the present. I set up the M60 on the beach, sheltering from the wind and rain, and painted the layers of sediment, pockmarked with sand martin burrows. 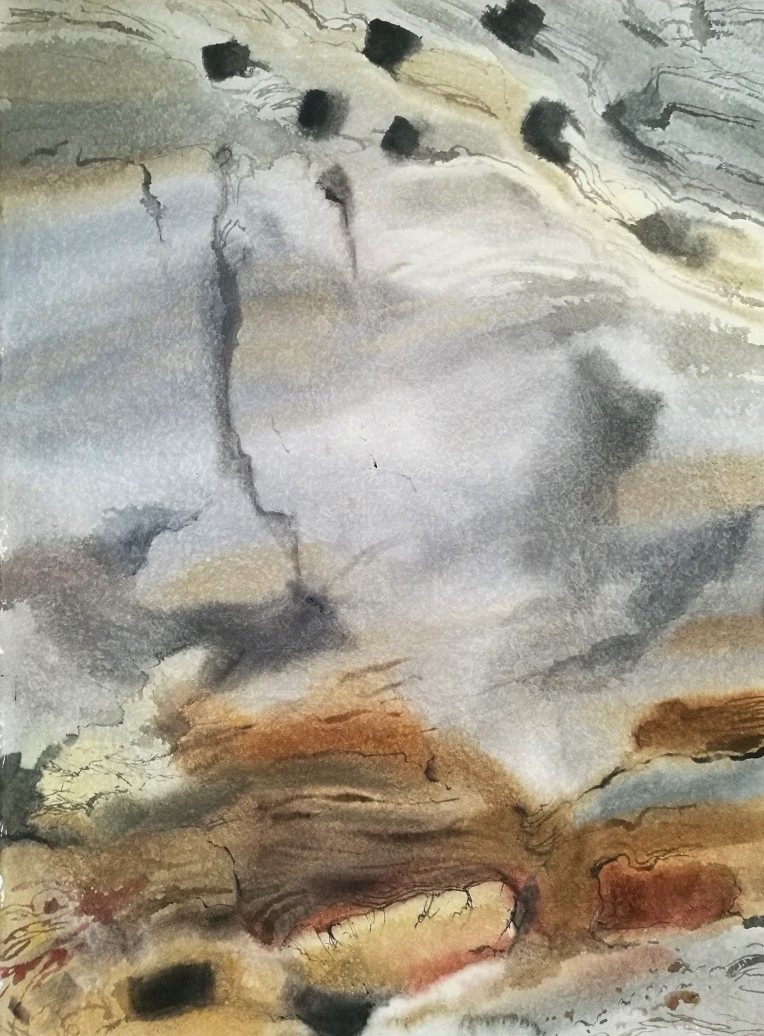 I walked onwards on a broad sandy beach, the water unusually low because of the storm. Soon I passed into another geological layer, the Robbedale formation, where dinosaur footprints and fossilized mammal teeth have been found. By the water’s edge I found a beautiful mallard wing, severed cleanly and fresh, which I took with me. Soon I reached Fosforiten, the site of a short lived phosphorous mining operation that was built exactly one hundred years ago, as a response to a worldwide shortage caused by the First World War. The mine ceased after just two years, but slabs of brickwork and concrete foundations can still be seen. I sat on the beach in the wind and painted the view to Arnager, with the wooden posts of the old pier buried in the sand in the foreground. 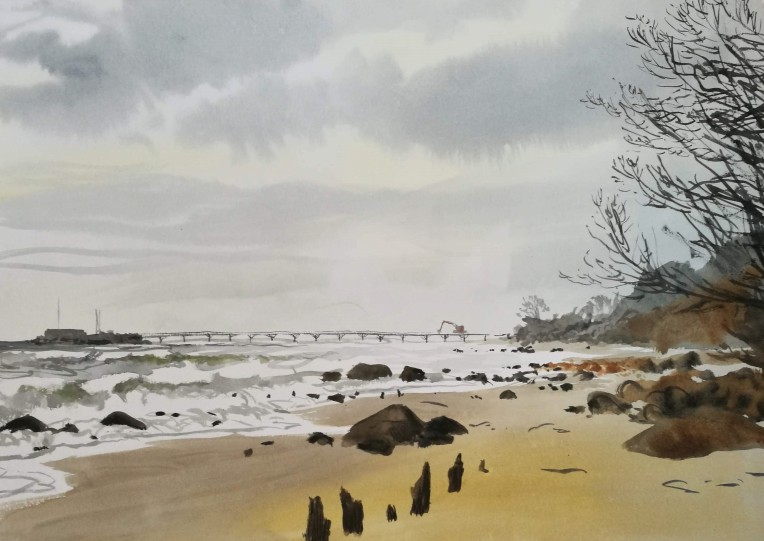 I walked up the stairway to the top of the cliff, where there was more shelter from the wind and spitting rain. After a break and some coffee, cakes and company, I painted the mallard’s wing under the shelter of the M60, with the secondary feathers shining iridescent in spite of the grey light.

I used a fair amount of time on the mallard wing, and the cold had slowly seeped into my body. Down on the beach again, I continued walking towards Arnager. After a hundred metres or so I reached Vældekilde, a spring that seeps out from the bottom of the cliff onto the beach. The water runs clear but stains the pebbles and boulders with fatty deposits of iron oxide. In the water the pebbles were an incredibly rich ochre colour, while the larger boulders on the edges were the deepest metallic maroon and purple. I used the iron oxide deposits to paint with, and found they mixed well with my watercolours. 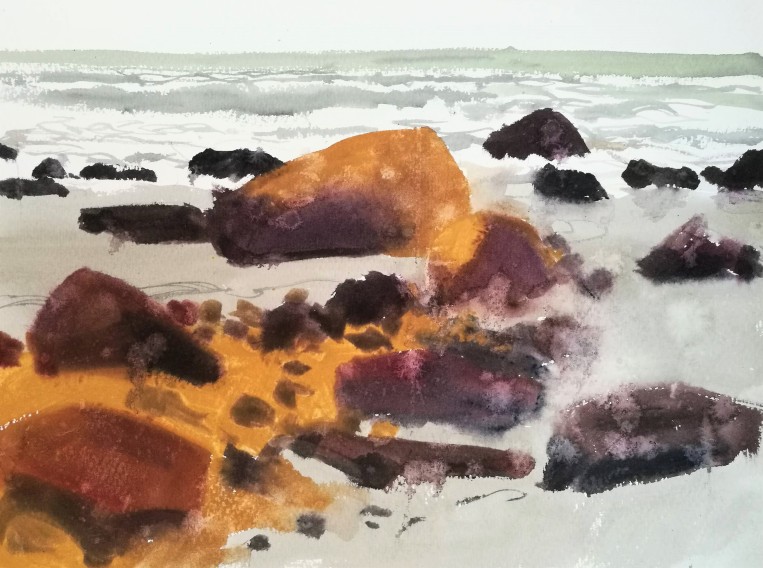 I stamped around on the pebbles in the spring, which released their iron oxide and dyed the water an opaque and almost luminous reddish ochre. The bright rivulets of ochre-enriched water formed delicate tributaries and tendrils before emptying into the sea, which I tried to recreate by painting the ochre sediment directly onto a wet sheet of paper.  It was difficult painting in the rain, wind and cold, but incredibly exhilarating. I felt giddy and ecstatic, and deeply connected to my perception of the environment.

I walked on and arrived at Arnager’s impressive wooden pier, the longest in Denmark apparently, and currently under renovation. Sheltering under the new wooden posts I made one last hurried sketch in the drizzle and the fading light. Despite the cold, the wind and the wet, I had enjoyed a fabulous day. As always, I was completely exhausted and drained, and was glad to be collected rather than walk all the way back to the start. 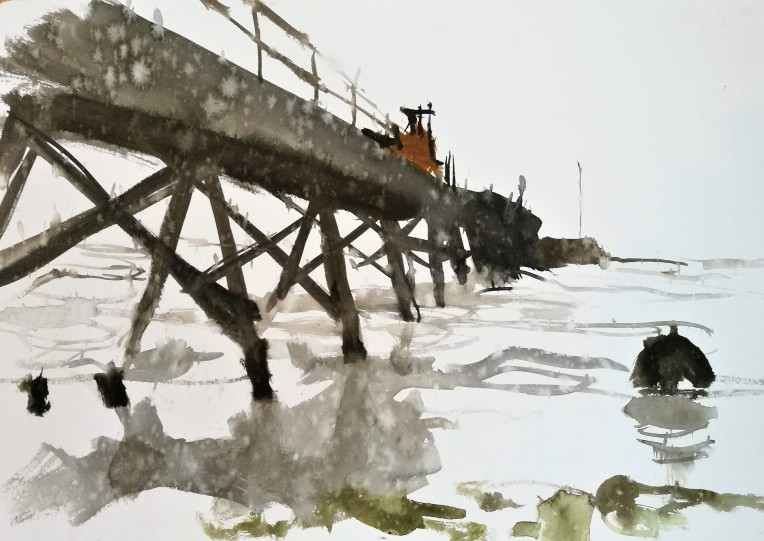 Weather report = Cloudy all day. Temperature between 2°C and 3°C. Wind between 10 and 13 m/s from the southeast. Hours of sunshine: 0 hours.

Other stuff = The iridescent colours on a mallard’s wing was one of the first things that got me interested in birds as a very young boy, so I was very happy to discover the wing lying so perfectly on the beach. It was strange that it was severed so cleanly from the rest of the body, of which there was no trace at all. Several hours and kilometres later, towards the end of the day, I noticed another wing – this time caught high on a thorny on a bush several metres away from the coast. I clambered up and retrieved it and was flabbergasted to see that it was also a mallard wing – and must’ve belonged to the same bird. Weird, just weird.

In my head – The huge library project and impending deadline.