(See her for an introduction to the KYST project)

KYST 01 began with a touch of the ‘man flu’ and an unfamiliar feeling of apprehension – somewhere between anxiousness and excitement, almost as if I was starting a new job or something. I had arranged to meet Steffan from TV2 Bornholm and Kathrine from Radio P4 Bornholm – both there to cover the start of the ‘journey’. The sun was due to rise at 8:27am, so the plan was to be at the end of the northern pier of Rønne Harbour a little bit before to give me time to set up. On the way down to Rønne Kathrine called to say that there was no public access to the pier, so we raced around to find an alternative start point, which made for a rather farcical start to the project. In the grey drizzling rain, with my ridiculously overpacked rucksack, my ‘M60 Brolly’ (a giant umbrella) and huge chair, it all felt a bit weird, absurd even.

Although not right at the pier’s end, we found a good spot at the entrance of the harbour in the carpark. It seemed like a fitting point to start the journey – the main point of entry to Bornholm with a view of the ‘capital’ Rønne, and its industrial surroundings. I managed a couple of drizzly watercolours, and abandoned a drawing. After an hour or so, Steffan and Kathrine left and I started walking towards the ‘fyldområde’ (loading area) of the harbour, where there are often some quite exciting birds (long and short eared owls, twite and so on) in the colder months. Soon after I started, however, a car pulled up alongside and a rather nervous, but polite, harbour security guard asked me what I was doing. My giant umbrella (well it is called a ‘M60’) had evidently caused some alarm. No problem, I explained what I was doing and he left me to my own devices.

The loading area was rather bleak. It was cold, but thankfully not windy, with bands of fine rain regularly passing through. I put up the M60 and tried to look around and see what was about. 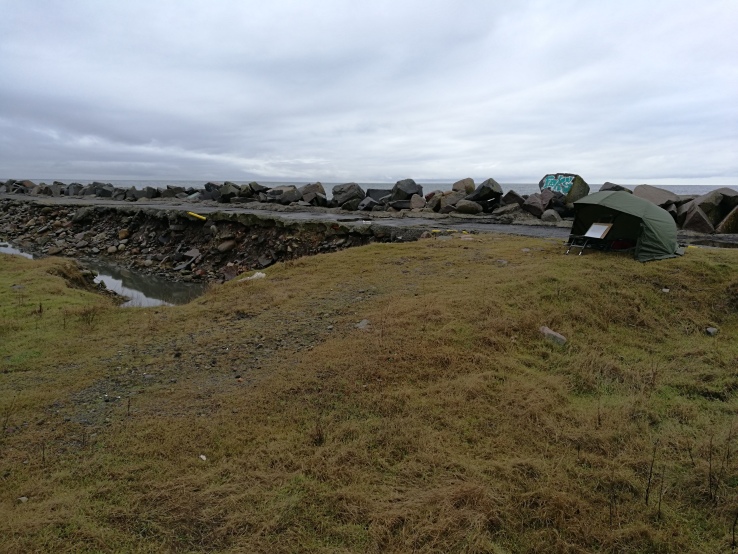 Almost no birds, just a few hooded crows and some distant gulls. So began a bit of soul searching, which was to become a bit of a theme – ‘…What on earth am I doing here? What am I looking at? Where shall I start? Why? and so on. The need to ‘record’ something and the need to let my eye be drawn in. It is very easy to chew over these sort of questions too much, and I always find it best just to do something when paralysed by self-doubt and indecision. So I just lookled around and was drawn into the contrasts between the dull ochres and browns of the grasses and colours of the loading sheds and harbour infrastructure.

After a while I wandered a little around the nearby Nørrekås Marina, where I saw a diseased sea trout floundering around in the shallows. Apprarently it’s normal for this time of the year for their mating-induced abrasions to get infected with bacteria – due in part to the low-saline content of the Baltic Sea.

Next, a brisk walk along the seafront heading north, where I began to regret the fact that I had taken so much gear. I stopped again to sketch my destination point ‘Hvidodde’ in the misty rain, but it was all proving a bit challenging. 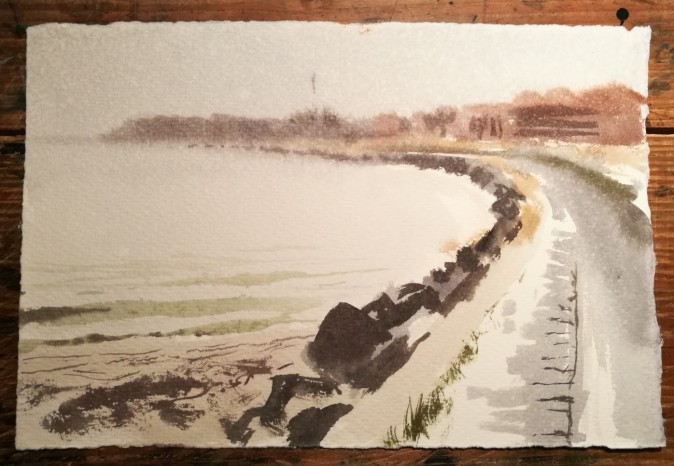 Continuing North, just before Rønne’s abbatoir I was forced to a make a diversion ‘inland’ for a little while before I came out on to the coast again, where I set up the M60 again for a quick lunch. The view here is commanding – looking south you can see all of Rønne, while the forested point of Hvidodde can be seen looking north. Only it couldn’t, because at this point visibility was reduced to just a few hundred metres through the misty rain. Looking out over the ocean, enjoying my pot noodle, I did however, manage to see a grey seal bobbing around in the surf, just 20 metres or so from the shore. This is the first time I have ever heard of a seal seen from Bornholm – on the nearby ‘Ertholmer’ islands their incresing numbers are causing much distress to some (and joy to others). Not enough time to sketch it though.

Time was racing and the whole day went by much more quickly than I had imagined. The last leg of my journey was to take me to the final destination at Hvidodde in time for the sunset at 3:44pm. The coast here is wild – there is no beach to speak of, just huge boulders, and there is not really any public access. Some of those lucky enough to have a garden leading down to the coast have built wooden steps down to the sea. Perhaps in the summer at low tide there it is possible to swim from there, but today the water was high and there was very little room. After a while the going got really tough and I began to curse the comfort of my M60 and padded chair. Jumping over slippery boulders with the sea crashing in is no joke (OK it is), and at one point I had to jettison the M60 and chair and take the rucksack on alone. Once I had reached the rather broader beach at Hvidodde I turned back to collect the M60. Then back for the chair. By the end of it I was drenched in sweat and laughing at the utter ridiculousness of the whole situation.

At Hvidodde I quickly set up my gear and looked south back towards Rønne to make one last painting. Working from the left of the paper in 10 minute strips, I had no option other than to try and capture the fading light and rawness of the whole experience – the cold, the rain, my aching limbs and my (now forgotten) man flu…

In my head = why am I doing this? what am I (supposed to be) looking at/for? relationship between seeing and remembering, pros and cons of technology and social media, , Black Mirror, Trump, etc, etc, etc