For at læse denne KYST 45 blog på dansk, se her 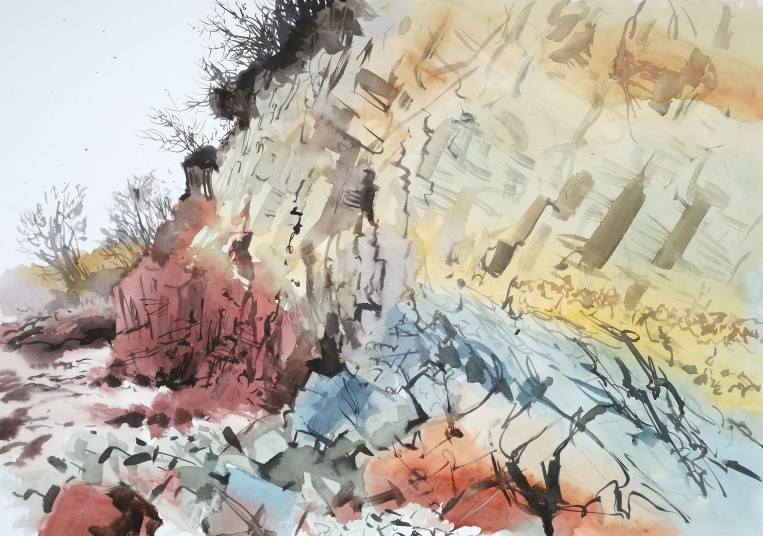 KYST 45 I drove across the island through a thick fog and arrived back at Boderne harbour a few minutes late. The sunrise was, in any case, obscured behind the fog and there was no real sense of the day starting, just a very gradual and almost imperceptible lightening. There was no wind and thus almost complete silence, and looking towards the sea from the end of the harbour, the complete lack of visual and auditory information created a feeling of weightlessness and instability. A young heron was perched on a rock by the harbour and I unpacked and got to work right away.

After a brief preening session the young heron hunkered down and gazed vacantly into the fog, reminding me of an unkempt and slightly chavvy teenager. The yellowish tobacco-like stain on his chest feathers added weight to my anthropomorphizing, but I resisted my urge to paint a fag (Benson & Hedges?) hanging from his beak.

Eventually leaving the harbour and my obliging model, I packed up and walked on.  Læs Stream is Bornholm’s widest and largest stream, but the months of drought meant I could literally step over it where it emptied onto the beach. Soon I paused, unpacked again and painted the view to the west. The fog was already starting to lift, but the humidity still presented a challenge as the paper refused to dry. 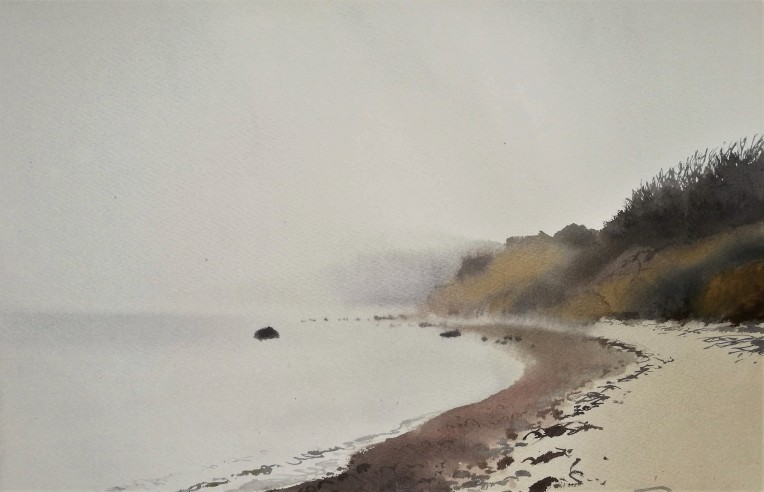 I trudged on, keeping close to the water’s edge and the harder sand, enjoying the respite from the wind that had accompanied me on my last few KYST trips. The beach was deserted and silent, save for the water gently lapping onto the shore and the occasional plaintive robin song. The day felt incredibly peaceful. I climbed up on to the ridge that ran parallel to the shore and painted the wonderful rich autumnal colours. 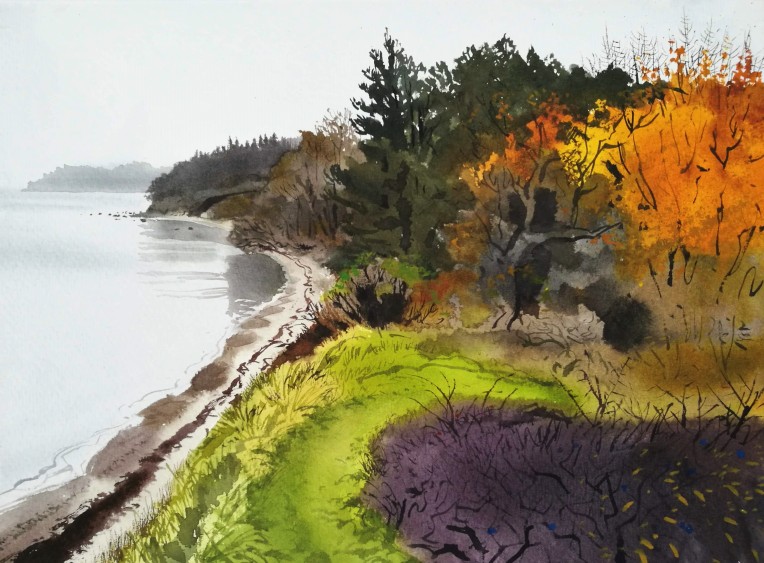 I walked on for a while, but a passing shower forced me to take refuge under the M60. Sheltered from the rain I painted the blue-grey Jurassic clay that oozed out onto the beach. A little further on I could see the point from where a pier had been built over 100 years ago to ship out clay quarried at Munkerup, for use in Frederiksholms Factory in Copenhagen. The quarry has long since been filled but two people I met could still recall the remnants of the pier supports still standing in their childhood, and on the beach I found rusted metal tracks half-hidden in the sand 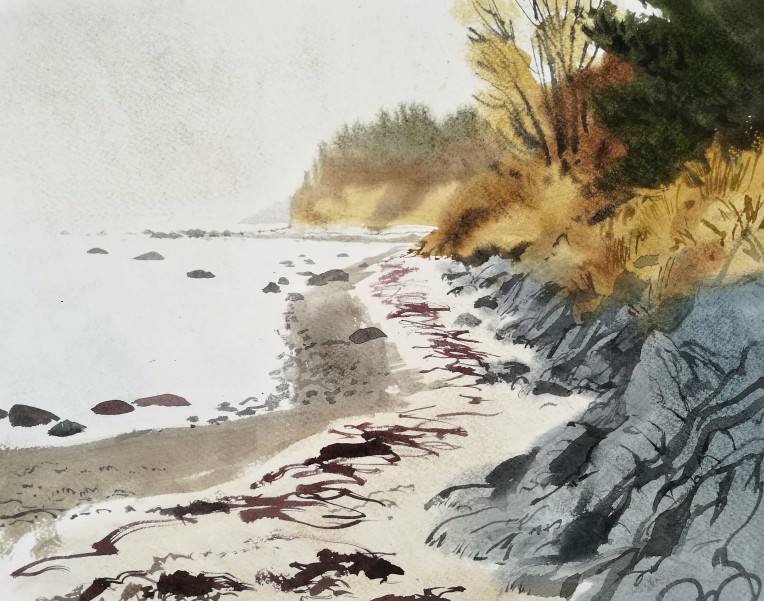 I packed up and explored the rough area behind the beach, a patchwork of hawthorn, cherry and birch in rich autumnal hues. As I headed towards Risegaard back down on the beach, I wondered at the rich layers of clay that folded and crumpled along the shore, banded and cracked in parts and stained with ochre. 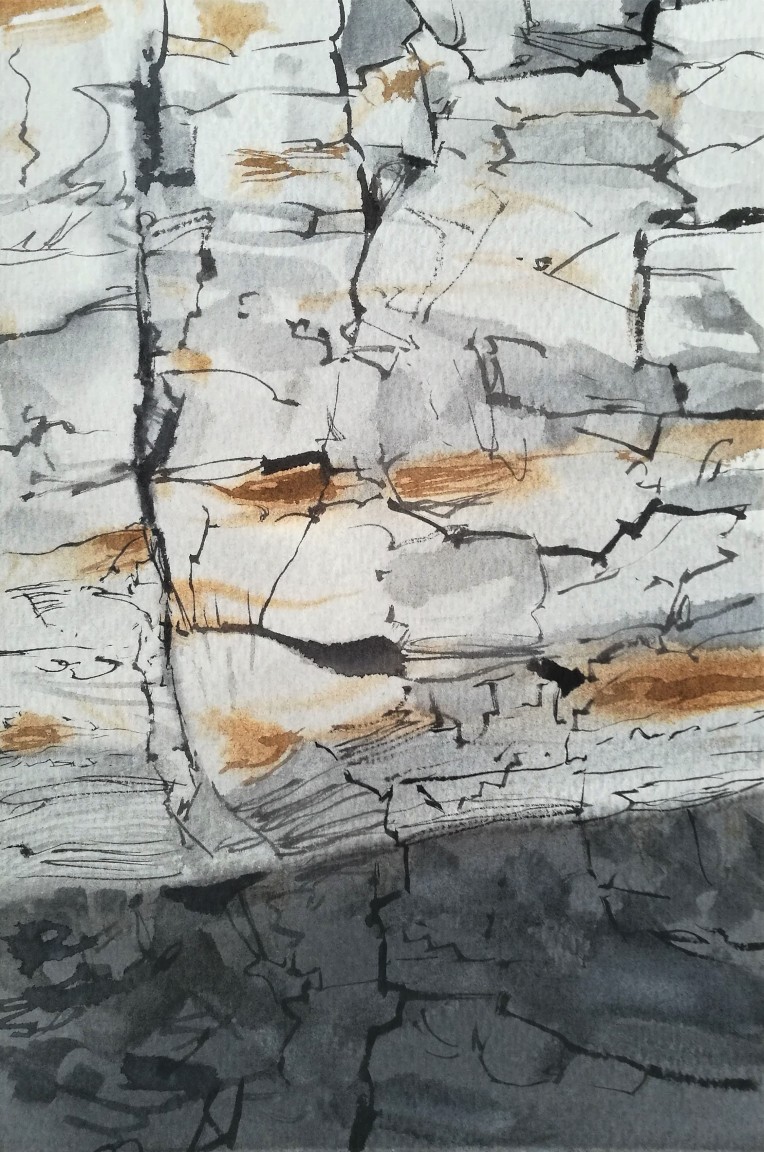 Further still, the Jurassic Munkerup formation was replaced by the older Triassic Kågerød formation and the layers of clay turned into an impossible turquoise hue and then a deep kidney red, intersected in parts by layers of grainy ochre sandstone. The colourful clay combined with the pastel coloured pebbles on the shore and the autumnal vegetation to create an understated and rather unexepcted riot of colour (see top).

By now the sun, hidden as it was, was nearing the horizon and I climbed up into the open area by Risegård for one last foray. The rich colours and interesting shape of a small hawthorn seemed to speak out to me and I sat and painted, exhausted as ever but happy with the day’s unfolding and full of the rich organic hues of autumn on south Bornholm.

Weather report = Foggy, then  overcast, with light showers. Temperature between 7°C and 9°C. Wind between 1 and 2 m/s from the southwest. Hours of sunshine: 0 hours.

Other stuff = Several times large flocks of barnacle geese flew overhead and headed out over the sea, before turning back. I wondered if any of the flocks contained the red-breasted goose that has been on Bornholm together with the Barnacles over the last few days.

In my head – BJJ all the way, the Bornholm sports and culture prize.