For at læse denne KYST 44 blog på dansk, se her

KYST 44 From the car park, I walked into the open area that is Raghammer Odde. The sky was leaden and the wind howled in from the sea. Before reaching the coast, a walk of a kilometer or so, I sheltered under the M60 umbrella and painted the heath with the birch and pine forest behind. Within minutes a large truck pulled up, the driver asking what I was up to. Evidently the M60 aroused suspicion. 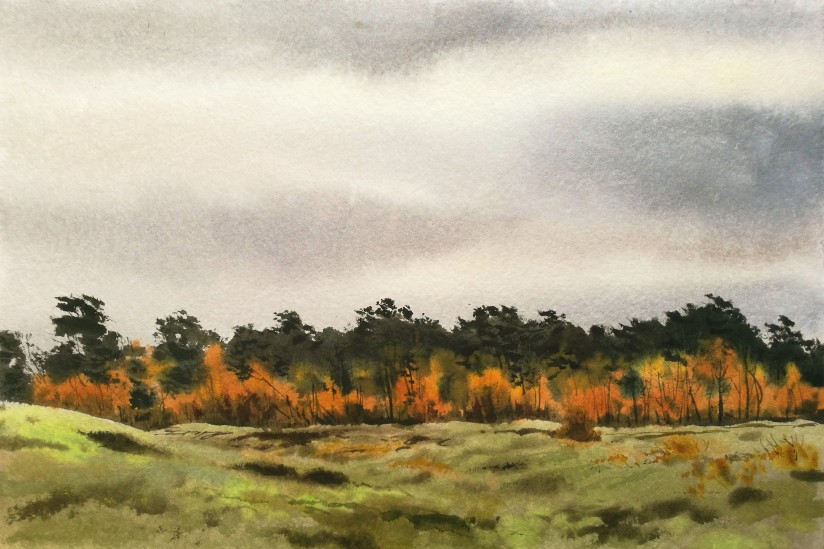 Leaving the shelter of the M60 I walked around a while, across the tracks of military vehicles, and over trenches and bunkers. The whole area was littered with sandbags and riddled with bullet holes. The colours were rich and intense, but again there were very few birds about.

As the clouds were replaced by clear skies I finally made it to the beach where I sat and looked towards the rising sun. 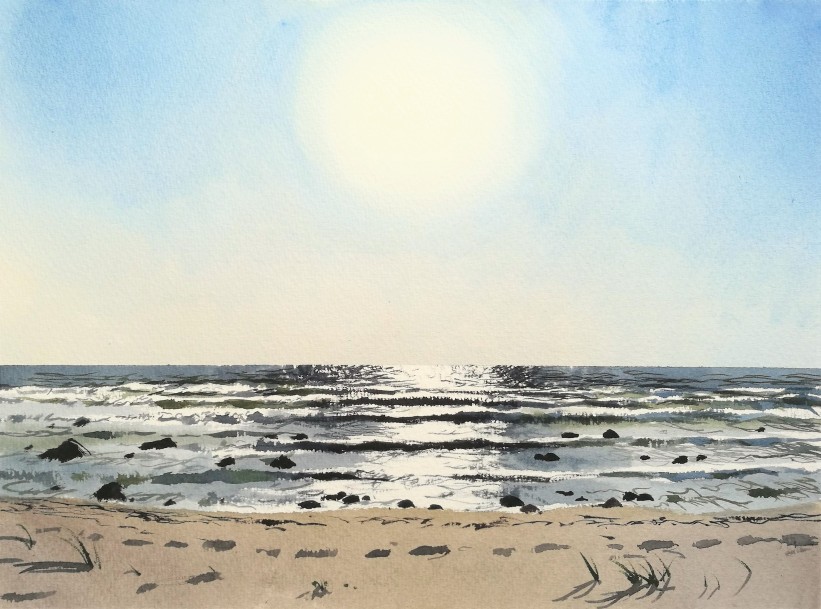 Some fishermen were already standing waist-deep in the roaring surf. I was impressed with how they managed to keep their balance and stoically endure the bitingly cold wind and waves.

I packed up and walked around the headland, past the fisherman and towards my destination, Boderne. No sooner had I begun when a flock of snow buntings flew right over my head and alighted not twenty metres from me. One of my all-time favorite birds, I quickly crouched down and unpacked all my gear again, nearly losing my paper in the wind. As I finally locked on to them, paintbrush ready, they flew off again. I quickly tried to capture the energy of their movement and flight, their white wings and contrasting tails and wingtips flashing, before the image faded from my mind (see top)

Soon, they returned again, and I was ready – but again they stayed for just half a minute or so, before bouncing off down the coast.

I walked on and found a lovely sheltered and sun kissed spot behind the dunes, where I enjoyed my weekly pot noodle and some strong coffee. Eventually I willed myself to pack up and walked back up to the crest of the dunes, where a buzzard was hanging on the wind on the lookout for rodents. Back and forth he sailed, hanging for a while and then swooping off, like a giant brown kestrel. Soon there were two and I got to work. 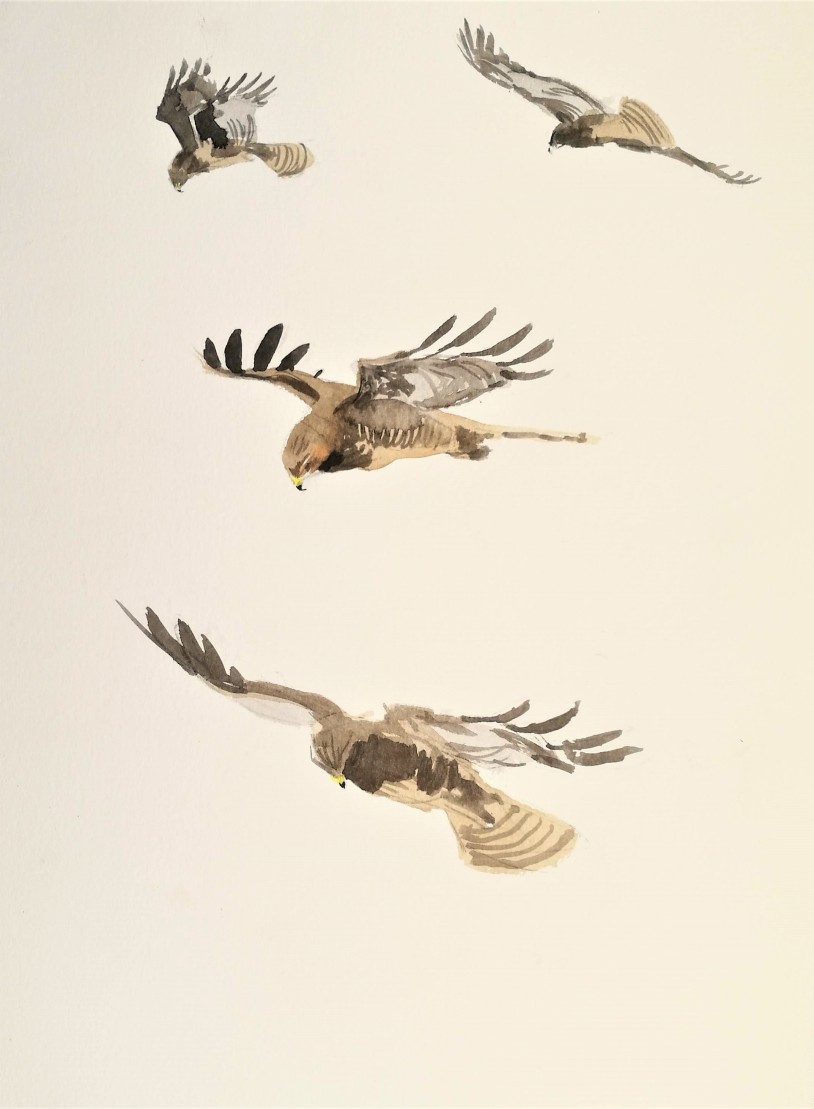 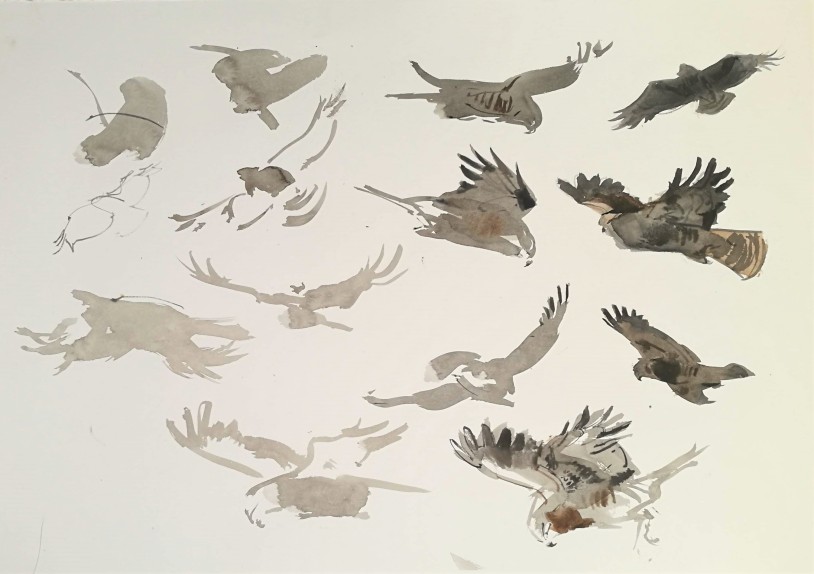 Up on the dune and looking west, I could see the waves rolling into the bay and the lime-green dune grass pulsating in the wind. Beyond the small harbour of Boderne, Sose Odde (KYST 47) and then Arnager (KYST 49) were clearly visible. I became aware, for the first time really, of how close I was to circumnavigating the island. 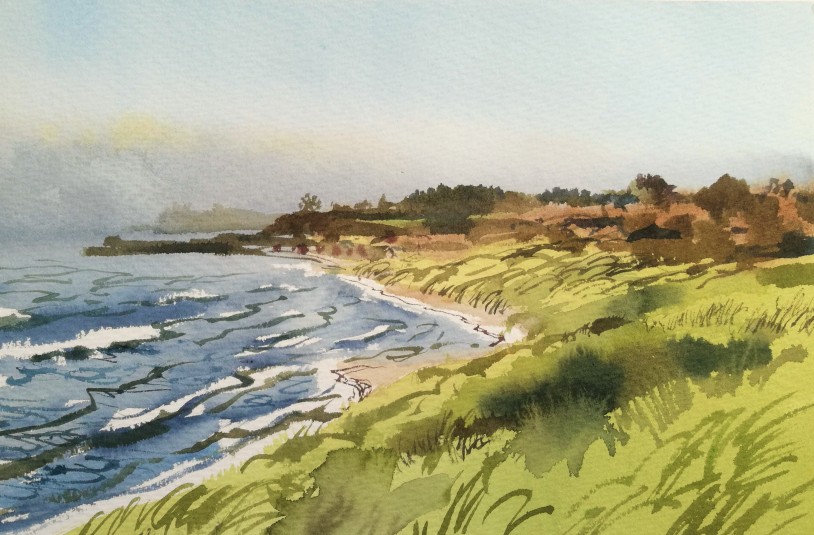 I carried on, this time on the beach, all the way to Boderne, where I wandered around for a while. The sun had been replaced again by a thick layer of clouds and the wind whipped through the masts of the small boats jostling in the harbour. Time was running out and I was exhausted, the wind had really drained me of energy. I sat and painted a part of the harbour but I was done by now. The setting sun left no trace, but then suddenly a bright crimson line along the horizon lit up the sky and brightened my mood. 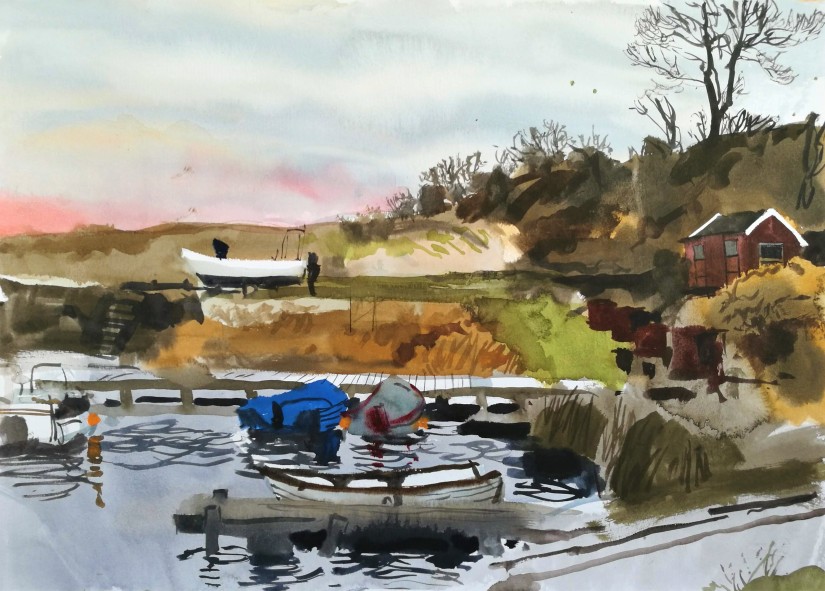 Weather report = Cloudy, then sunny, then cloudy again. No rain. Temperature between 9°C and 11°C). Wind between 6 and 8 m/s from the southwest. Hours of sunshine: 5.5 hours.

Lessons learned – when taking down the M60, release the catch first, then take out the pegs (took me 44 trips to work this out…)

Other stuff = I was disappointed with the lack of birds at Raghammer Odde, it is usually good for raptors, shrikes, and so on. Then the snow bunting turned up. Nature never disappoints if you’re in it. Something always happens. Always.

In my head – BJJ- The project I’m doing at Aakirkeby Library. 4321 Paul Auster.