For at læse denne KYST 23 blog på Dansk, se her…

KYST 23 Two days later than originally planned, I set up my gear at the day’s start point, Hestestene, ready for the sunrise. A layer of cloud over the sea to the east obscured sun as it crept over the horizon, but otherwise the sky was blue and the day was already warm.

Suddenly – ’Pleased to meet you!’ – the four note song of the scarlet rosefinch, a real treat which immediately put me in a positive frame of mind. Over the next couple of hours as I explored the area, the rosefinch was my companion, flitting back and forth though never showing. Just down the path from the standing stones a twisted hawthorn framed the sunrise. 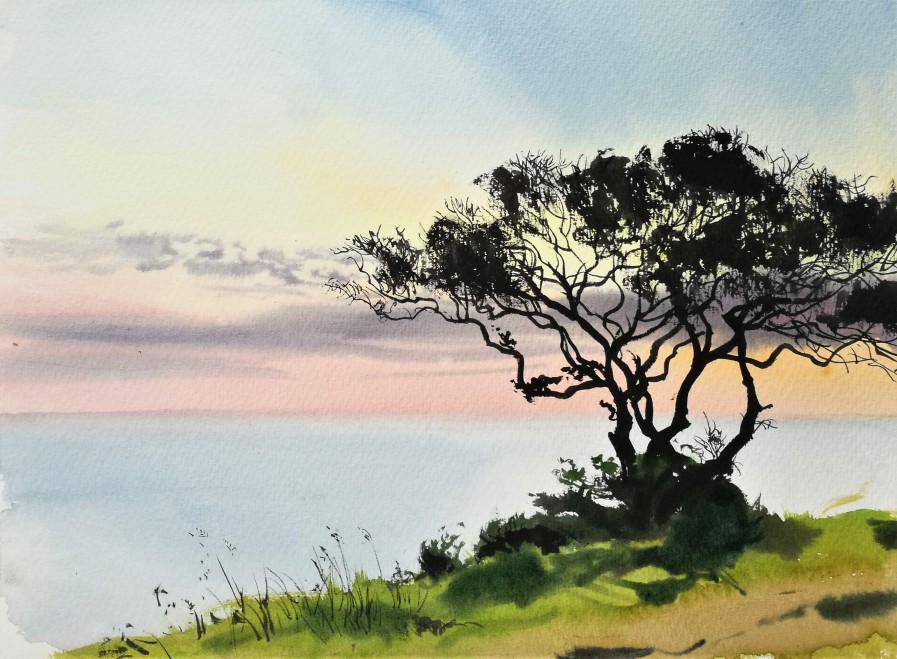 The week before I had observed a hawk moth (broad bordered bee hawk moth) feeding on some sticky catchfly flowers, and was hoping for a repeat performance – but the flora had changed markedly in the intervening days and some harebell and cranesbill were flowering in their stead, amongst patches of dead ochre grass resulting from Bornholm’s deepening drought.

Eventually I walked on towards the historic town of Gudhjem, through a coastal path bordered by a thick and unkempt wood on one side and cliffs with bracken and wild flowers on the other. The elder bushes were now flowering, and once again I thought about how quickly the Bornholm flora evolved and transformed week by week. Walking around the cape, I could see the smokeries and red roofs of Nørresand in the distance (see top). A little further on, I came across the idyllic scene of some locals, gathered at the base of the rocks for their morning swim and enjoying a coffee together in the sunshine. I continued on to the beach at Nørresand, and set up my M60 on the raised platform where not long ago fisherman used to sort their nets. Here I ate, rested and slept. A wood pigeon settled in small ash tree just metres from me and started to delicately eat the tips of the youngest leaves.

All along the raised beach area, the yellow mist of Turkish Rocket mixed with the incredible blue-violet of Viper’s Bugloss.

Down by the rocky shore I wandered around looking for tadpoles and newts. The fierce sun and lack of rain meant that many pools were in the process of drying out, while others were turning toxic and green with algae. In one, a soup of thousands of wriggling black tadpoles gathered at the edges of the pool, struggling and desperate for oxygen, while their deceased companions floated on the surface. It was a grim portent of an ecological Armageddon, and in sharp contrast to the idyllic and tranquil scene unfolding around me on the beach. A little further on, I found a mummified smooth newt that had obviously taken a wrong turn when leaving the pool and been literally fried and dried by the sun.

I walked up to ‘Bokul’ the ancient hill overlooking the town. Here many of Bornholm and Denmark’s most well-known artists have painted the red roofs of Gudhjem (‘God’s Home’) and the high blue horizon. The Danish flag fluttered proudly in the breeze.

Down on the coast at Nørresand again, I stopped for a wonderful lunch in the small café by the shore. People milled around and enjoyed the sun. After chatting for a while with a friend I walked around Nørresand harbour and its strange bent harbour-arm. A group of locals sat and sang together in the sun. There was an incredible peaceful and almost utopian atmosphere, and I quickly forgot about the suffocating tadpoles in their ever-shrinking hellish confinement.

Eventually I carried on, past Nørresand and on to Gudhjem proper. Filled with tourists in the summer season, the town was still relatively quiet and relaxed. I sat in the harbour for hours, a little dazed and exhausted, and drank in the tranquil atmosphere. Swifts swooped overhead and the local ferry seemed to merge into the town itself.

After another fantastic café stop (what luxury!) I ambled on, out of Gudhjem and into the rocky cape of Randkløve Odde, the gneiss bedrock cracked and riven with deep fissures and crevices.  Looking back towards the masts and chimneys of Gudhjem the sky was already turning orange. 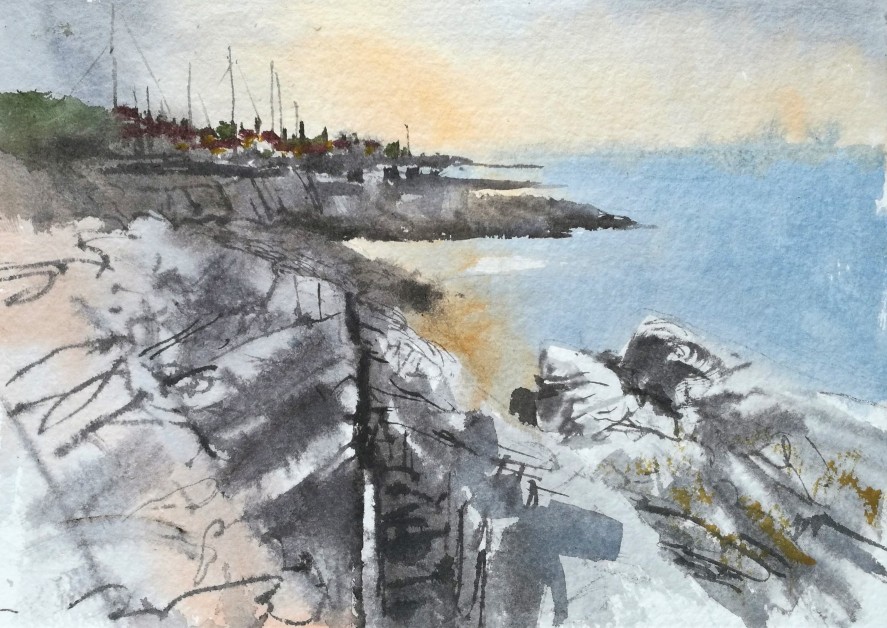 Incredibly, considering the length of the day, I was running out of time and I walked quickly through the harsh landscape towards my destination. Linnets and whitethroats flitted around, but still no nightingales. I perched on the edge of a cliff and looked south towards the distant town of Svaneke.  The combination of my fatigue and the quickly setting sun lent a welcome looseness and vitality to my brush strokes. It had been a truly fantastic day, and I walked back to the car buzzing with exhaustion to the screams of the courting swifts.

Weather report = Mostly sunny all day clouding over in the late afternoon. Temperature between 17 °C in the early morning and evening and 25 °C in the afternoon. Wind between 3 and 5 m/s from the east. Visibility: fantastic. Hours of sunshine: 13.5 hours. The hot and dry weather continues.

Lessons learned – learning about flowers the whole time, love it…

Other stuff = despite only sleeping three hours the night before, I had loads of energy through the whole day. The weather could not have been more comfortable (tho’ maybe not so good for watercolour painting).

People talked to = 15 (single and pairs)