For at læse denne KYST 22 blog på Dansk, se her… 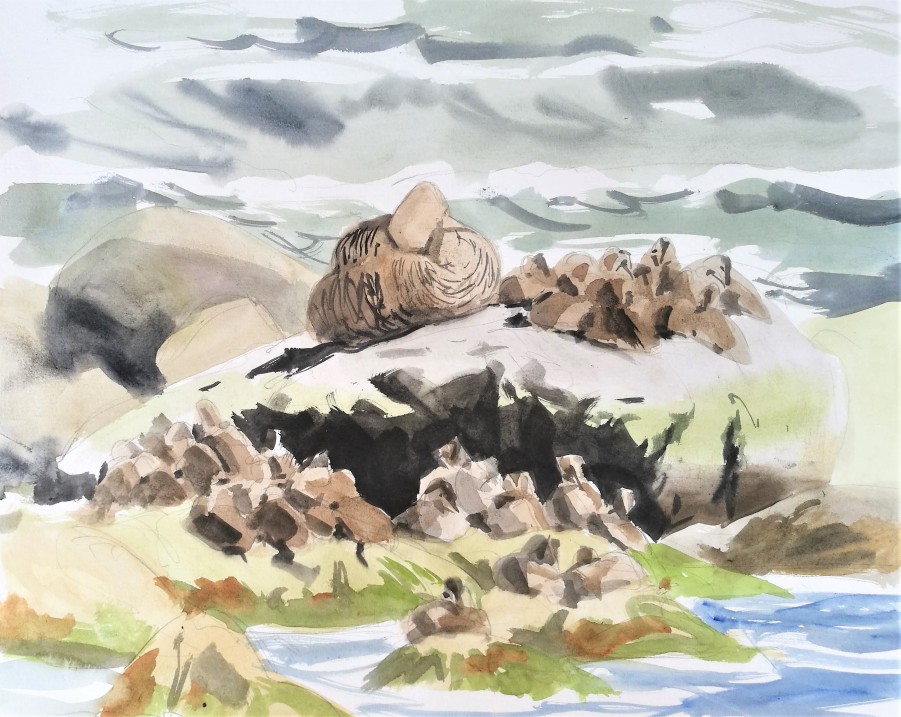 KYST 22 I arrived in good time; underslept but looking forward to the day.  There was little wind, and the low mist that I had driven through on my way across the island had all but disappeared by the time I parked the car and walked down the path to the water’s edge. In utter solitude I witnessed the sun break through the horizon and sail into the cloudless sky.

Very soon I realized I had forgotten quite a lot of kit, most importantly my tape (for masking off ‘timeslice’ pictures) and my bedroll. I immediately descended into a bad mood, annoyed that my busyness and lack of sleep had impacted the KYST project. I wandered around and looked at the tinder-dry vegetation clinging to the side of the cliff. One strange plant, with one tiny flower remaining, had the most incredible red leaves. 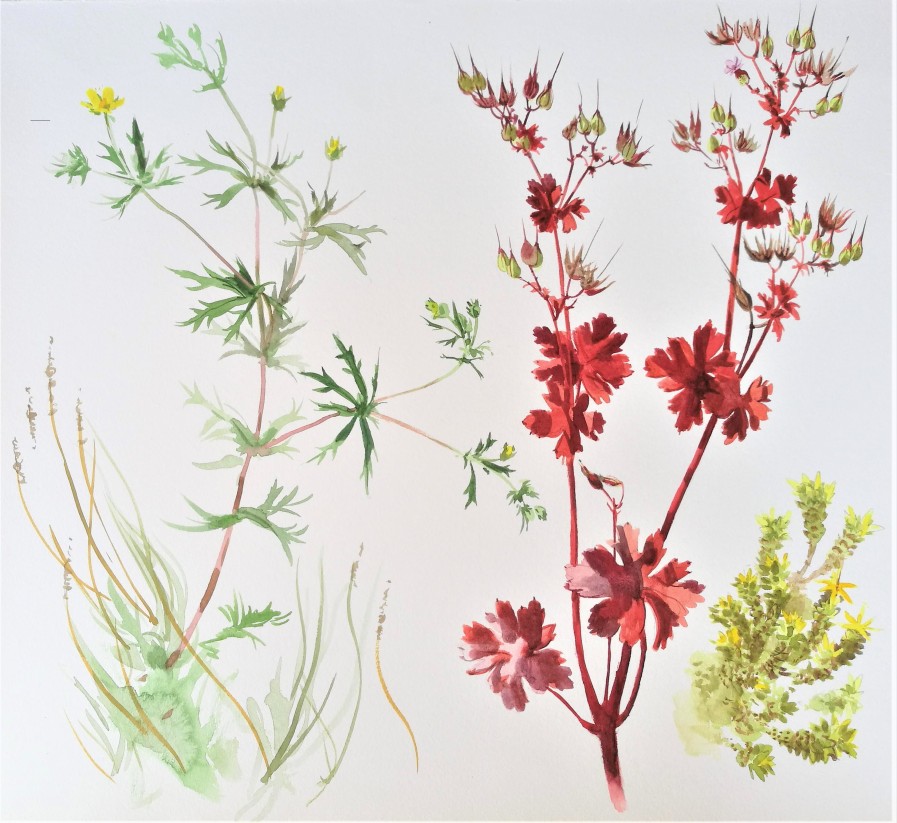 I wandered along the beach a little, and came to one of the many small streams that emptied into the bay. In the cool shade of the forest I listened out for singing birds and painted unsuccesfully the fresh foliage lit by the rising sun. I was tired and walked back up to the car for some much needed breakfast and strong coffee. Rejuvenated a little, I walked back along the path through the shaded forest clinging to the side of the cliffs for a while, before I came back out on to a small beach. I looked for wild flowers, marveling at how many different sorts there were. I decided to make a painting recording all the flowers of the day. Yet another mink slinked silently between the rocks. 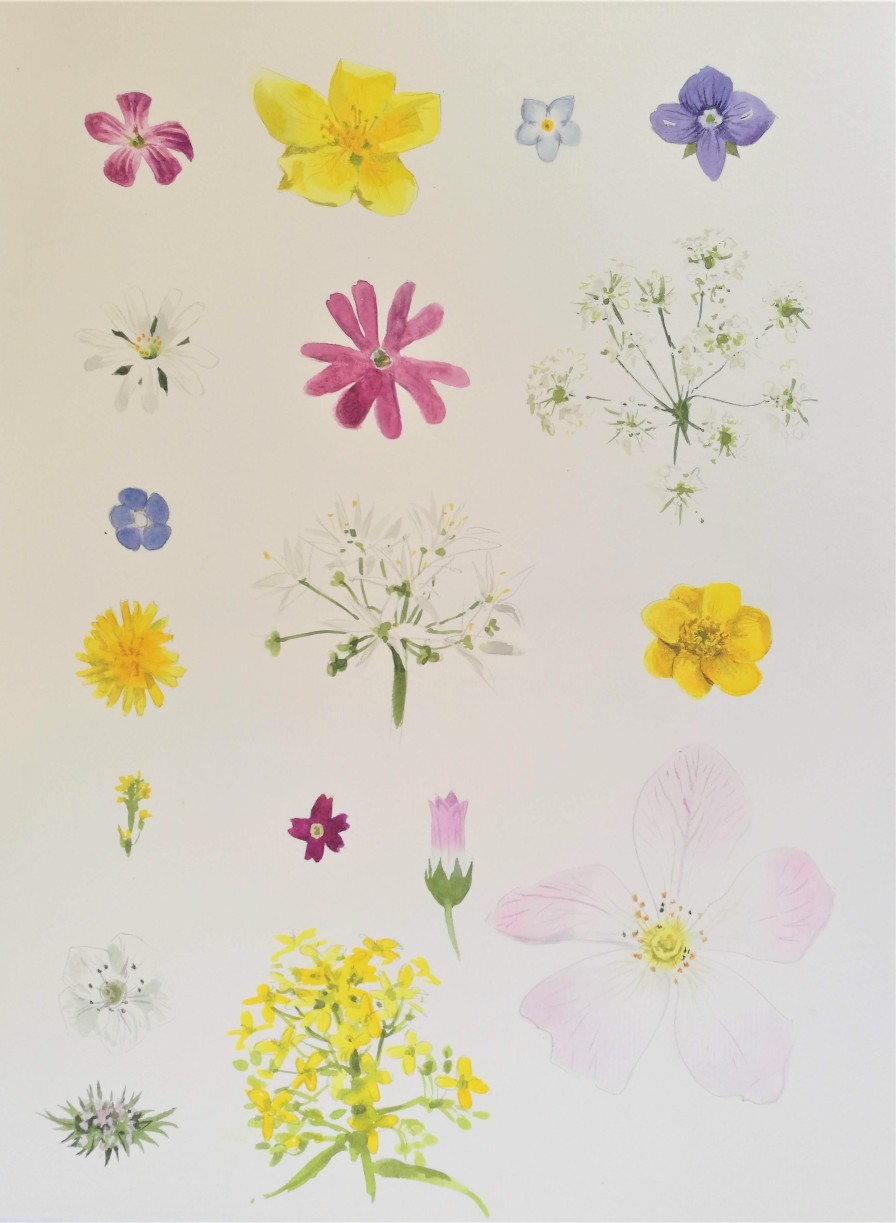 After an uncomfortable 20 minutes or so trying to sleep on the gravelly beach, I packed up again. Instead of walking on the rocky shore in the now considerable heat, I took the shaded path in the wood. Soon I came to the mouth of Bobbe Stream, roughly situated in the middle of the bay and half way between my start point and the day’s destination. Here I unpacked and settled, and tried to connect to the day and my physical environment. In front groups of eiders and their ducklings milled around, the males now long departed. On a cluster of rocks in front of me, one female rested surrounded by mountains of ducklings, who struggled to maintain balance and position on the slippery rocks (see top). This one duck was in charge of more than 70 ducklings. 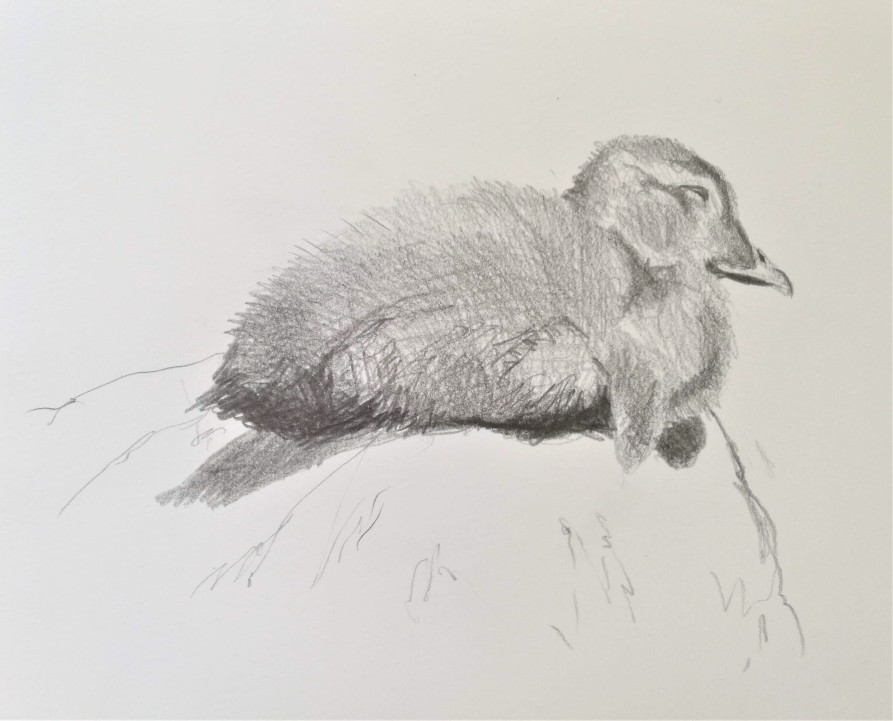 A friend arrived suddenly with juice and cake, but it took me a while to shake myself loose from the intensity of my solitary headspace. I took a detour into the wooded slopes of the Bobbe river valley, nearly all the way up to the main road. The wood felt heavy and oppressive – there was little birdsong and most of the wild garlic had mostly died back. The heat and the buzz of insects contributed to the summery atmosphere.

Back on the coast, the molting neck feathers on a male shelduck contributed to the sense of endless seasonal change and rotation.

My friend returned again unexpectedly, this time with tape and accompanied by one of the small children I had taught during a recent art project. She explained how, more than fifty years earlier, the beach was covered in sand and was one of Bornholm’s most popular bathing beaches.  As I watched them forage amongst the rocks and pebbles, looking for dead birds for the child to take home, I marveled at how things can change in such a short time.

After they had left again I sat still and watched the birds return to the beach. A hooded crow strutted purposefully amongst the rocks, looking for morsels, sometimes disappearing between the boulders. A hawfinch, not what I was expecting to see, sat by the edge of the wood on the pebbles and seemed stunned by the view of the ocean. A gull paddled in the water and repeatedly picked off tiny specks (of what?) off the surface of the water. A white wagtail bathed vigorously in the fresh water of the stream. A young cormorant dried its wings in the sun, then twisted its neck and looked up, drawing my attention to a red kite being harried by a hooded crow, far overhead. 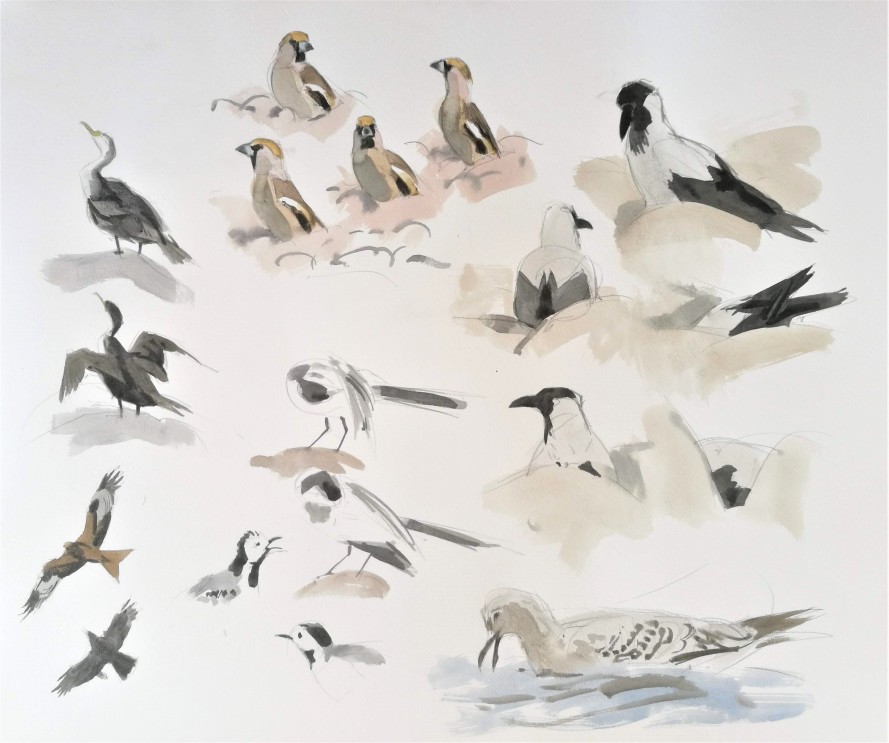 Eventually I packed up and walked on, trying to keep to the rocky shore instead of the path in the woods. Soon I came to Heksesten (the Witch’s Rock) one of Bornholm’s largest erratic boulders. The shore here was filled with small pools and ponds, wriggling with tadpoles.

I walked along the shore as far as I could, over rocks and bluffs and eventually to a strange isolated beach where iron-age graves have been found. I walked further along the rocks, until I was forced to climb into the forest cladding the cliffs. With all my gear and with no path through the thick and overgrown wood, it was hard going and I arrived at the cliff top coastal path exhausted and covered in sweat. I walked on further until I arrived at ‘Hestestene’ (the horse stones) a group of four ancient standing stones with a commanding view over the bay and onward on to the Hammer peninsula and the day’s destination.

Here I recorded the sun as it swept over the stones and dropped into the sea, lingering and flattening for a while, before it was finally extinguished by the water like a glowing ember. I had been lucky enough to see both the sunrise and the sunset over the water, in one long and eventful day, and I was absolutely exhausted, hallucinating almost. I hauled my things back up to the main road where I hoped to be able to hitch a ride back to my car. There was no traffic and I ran all the way back, accompanied by a roding woodcock on its nocturnal territorial flight.

Weather report = Mostly sunny all day with a few cloudy periods in the afternoon. Temperature between 15 °C in the early morning and evening and 24 °C in the afternoon. Wind between 3 and 7 m/s from the northeast. Visibility: fantastic. Hours of sunshine: 16 hours. The hot and dry weather continues. Six weeks without rain now and 379 hours of sun in May.

Lessons learned – I can will a slow worm to existence. Walking along the path I thought to myself …‘well, I haven’t seen a slow worm yet for the whole KYST trip, I wonder if I’ll see one…’ Thirty seconds later, a slow worm appeared on the path…

Other stuff = these long days are really taking their toll. I’m spending over thirty hours a week on the KYST project at the moment, as well as all the other exhibitions, teaching and so on, and I am beginning to feel the strain. Whilst pushing oneself often increases creativity and makes interesting things happen, there comes a point where it all turns to mud.

In my head = … I’ve never been happy with the whole concept of four seasons. Rather it seems to me as a series of waves – and endless cycle of expansion and contraction. Whilst in early June some flowers are still yet to bloom, some male ducks have already begun to molt, their work done, and soon waders will be returning back south, their spring and summer already finished. Two seasons makes more sense to me – one of exhalation (growing, breeding, flowering) and one of inhalation (seeding, rest, decay).