For at læse denne KYST 20 blog på Dansk, se her… 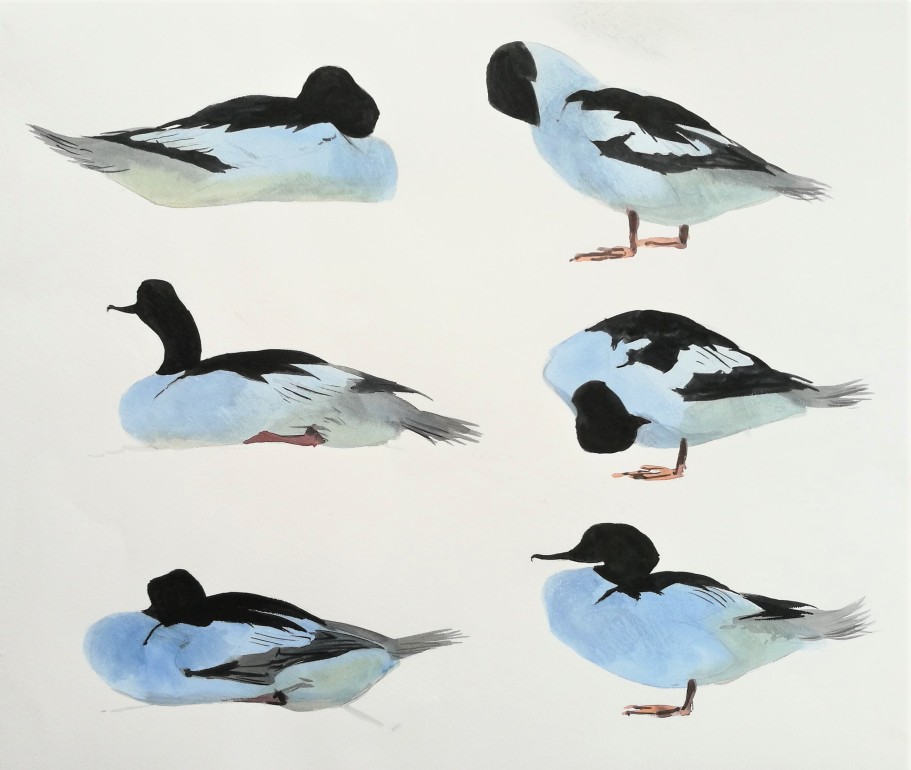 KYST 20 The noisy frogs in the pond next to our house had robbed me of the sleep I desperately needed, and I arrived back at Døndalen groggy and a little irritable. The spectacular sunrise and cacophony of bird song emanating from the forest, however, quickly improved my mood and I soon settled back into the reflective and contemplative frame of mind that the day demanded. I started off by revisiting the tree that I had painted at the end of KYST 20. I had hoped that there would be more of a difference in the leaves but the tree (an ash?) was either dead or a late developer. 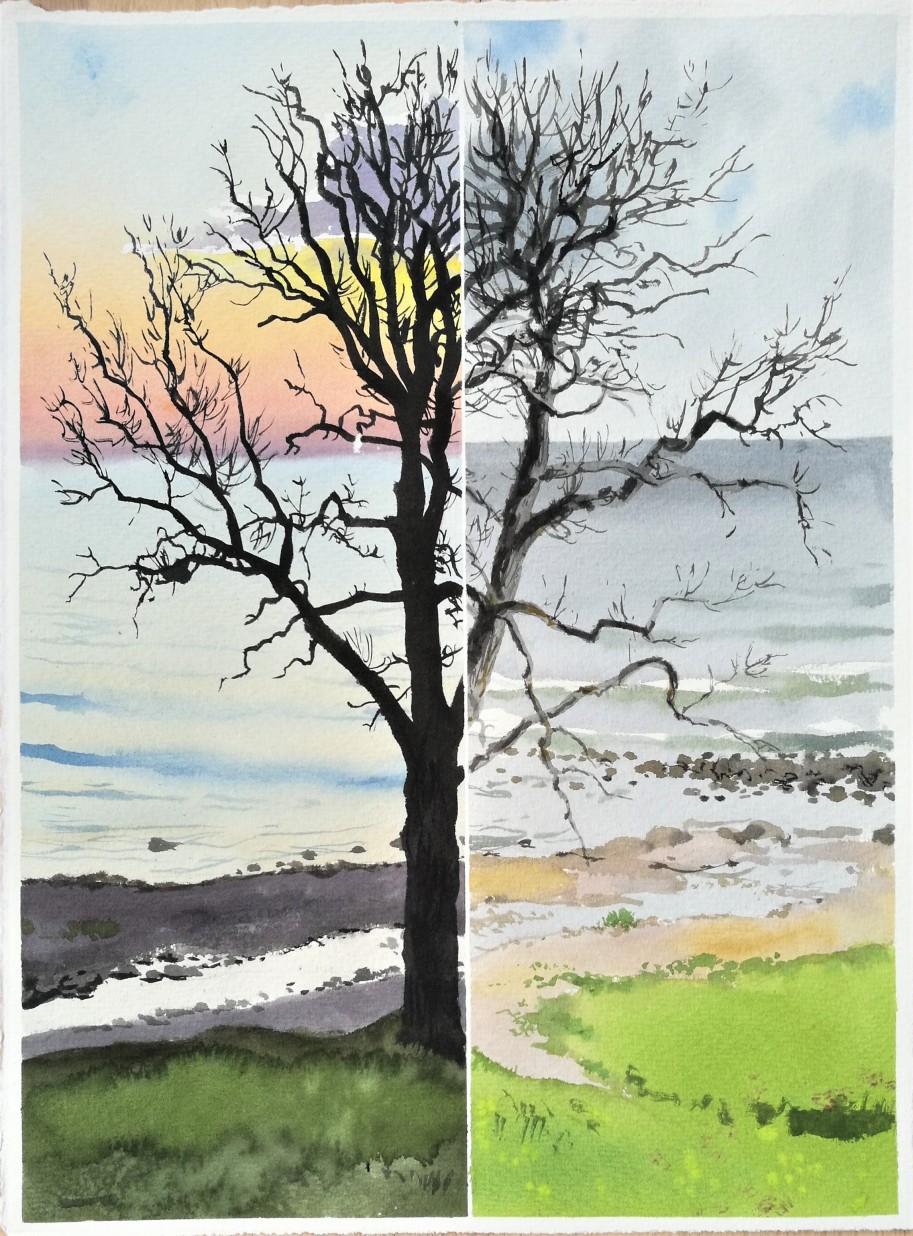 Between the first and second ‘slice’ of the tree painting I wandered into the forest at Døndalen and walked all the way up to the waterfall, Denmark’s second largest. The weeks of dry weather meant that the falls themselves were somewhat unspectacular, but the atmosphere in the forest so early in the morning was intoxicating, with the soundscape dominated by blackcap, wren, chaffinch, song thrush and wood warbler.

I wandered back to the coast and observed a pair of goosander resting on the shore. Incredible birds, goosander are strange reptilian fish-eating ducks with serrated bills, beautifully marked and often quite flighty, so I was glad for the opportunity to sketch them as they slumbered, stretched  and preened (see above). For the first time this year I saw a raft of eiders with young, 26 newly hatched fluffballs, with three females and a male. A pair of bossy shelduck waddled up on to the shore and the more polite goosander yielded immediately. Even the eiders moved off grudgingly and the drake shelduck settled down for a quick nap on the pebbles. 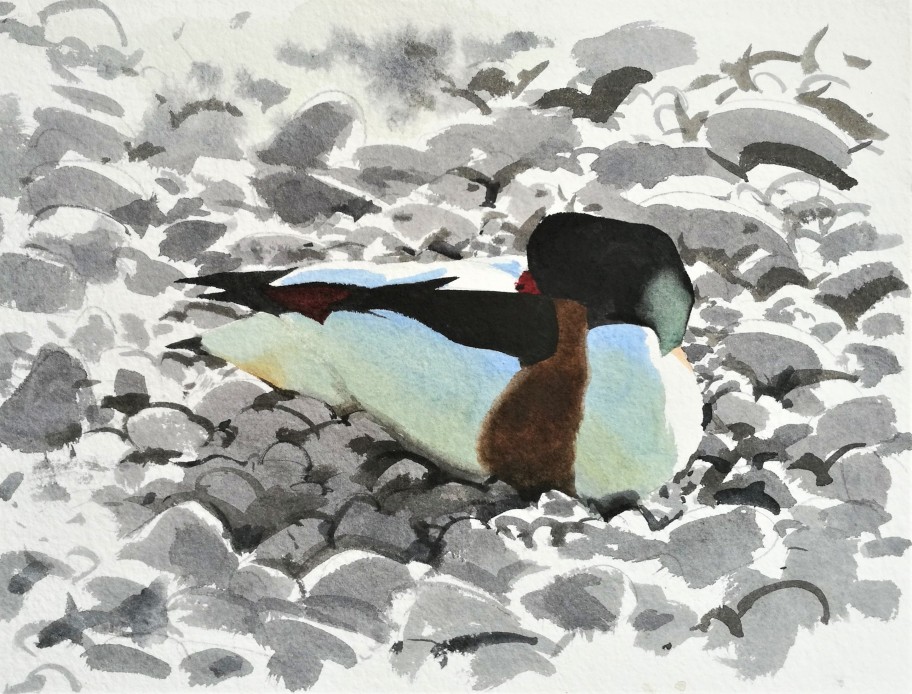 The area around the mouth of the stream was a meadow filled with various wild flowers and I wandered around to see how many different sorts I could find. I regretted my lack of botanical knowledge, but also enjoyed drawing something new and unknown. I thought of the escaped parrot I had seen in the forest last week, and how exciting and different it had been to try to record something when you don’t know how it is supposed to look. 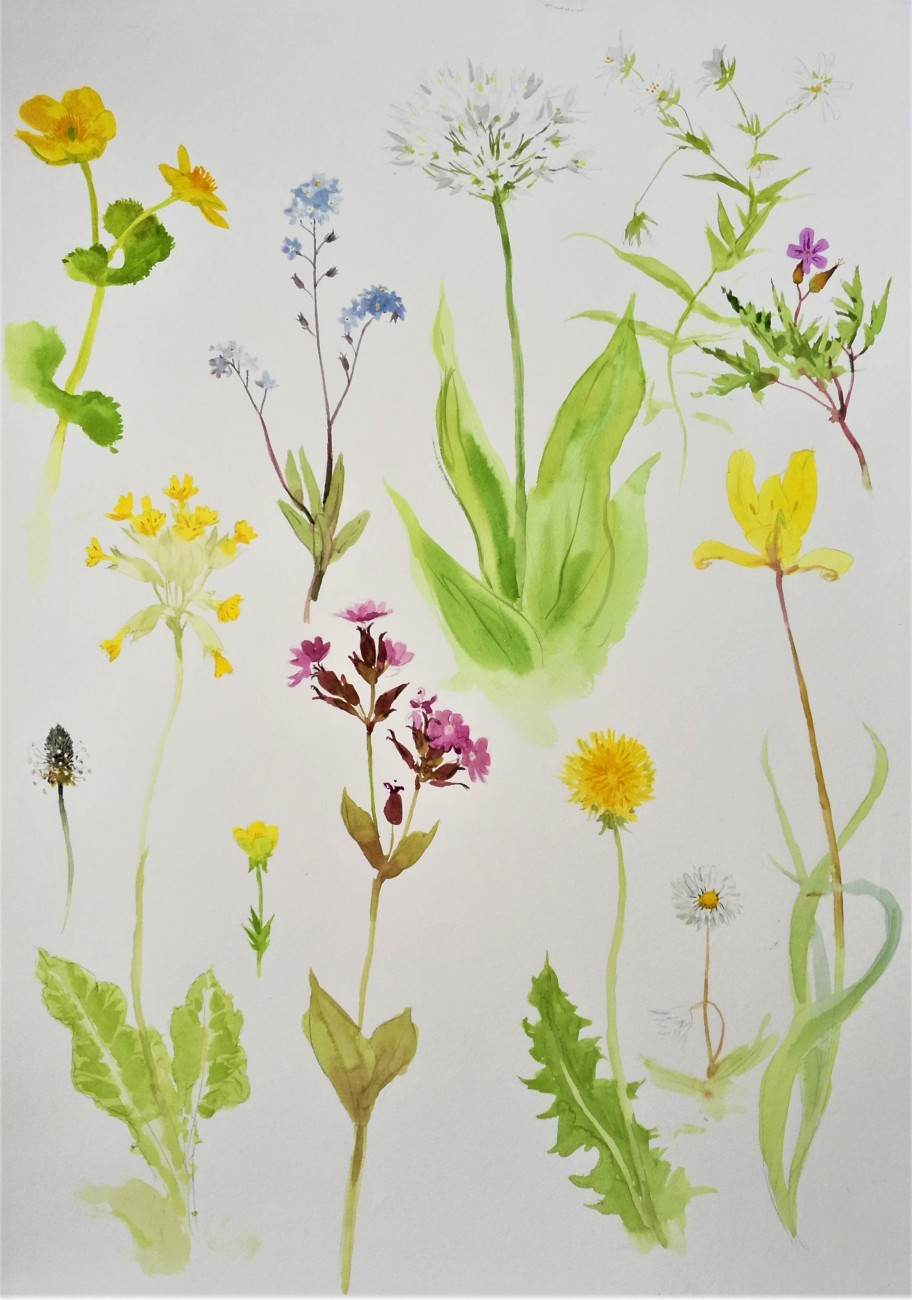 The weather was glorious – unbroken sunshine and little wind, neither too hot nor too cold. For the first time I had ditched my big and heavy chair and I felt almost nimble as I clambered over the rocky shore towards Helligdomsklipperne (the Cliffs of the Sanctuary/the Holy Cliffs). The forest skirting the shoreline was thick and almost impenetrable, but I noted the many goosander nesting boxes in the trees, put there by local bird-lovers.

By lunchtime I had reached the first of the tall and impressive rocky outcrops that form Helligdomsklipperne and one of Denmark’s most famous natural tourist attractions. In times past, there were a chapel and a holy spring, and pilgrims would visit from near and far. More recently, the area was a favourite motif for Denmark’s Golden Age artists. Today, tourists come to visit the new Art Museum perched on the cliffs, and wander amongst the caves and grottos and perch on the viewpoints and take selfies. I had arranged a rendezvous point with a local TV station (Øens TV), who had come to interview me about the KYST project and we sat on the cliffs and enjoyed some chocolate croissants and coffee in the sunshine. I sat on Libertsklippen, named after an artist, and sketched the strange rocky formations. 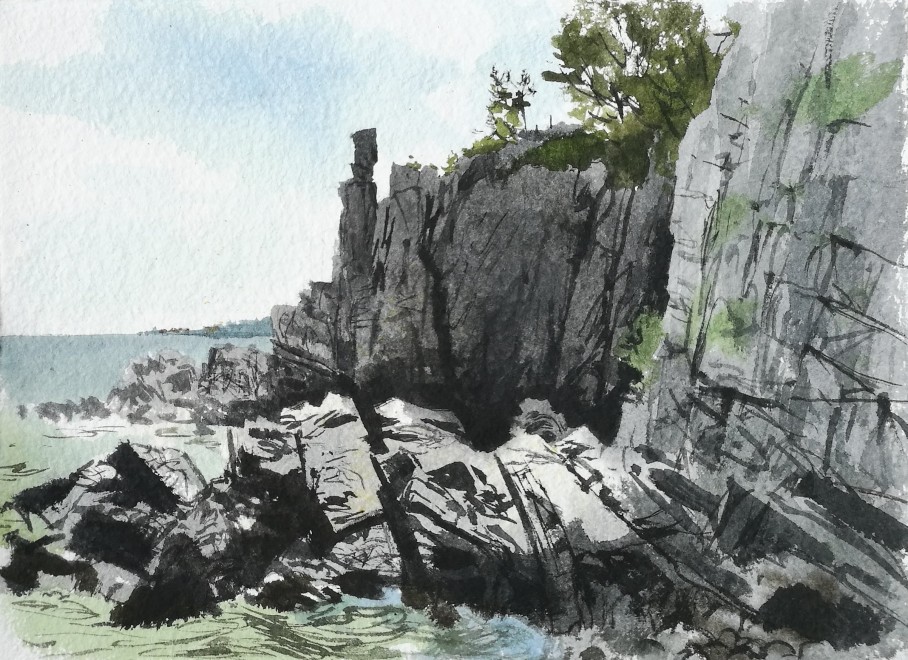 Eventually I walked back on to the coastal path, where I searched for a good vantage point to make a timed ‘slice painting’ of the shadows moving over the face of the cliffs. I found a fantastic spot jutting out over the cliffs with a fine view of Helligdomsklippen. Over the next seven or eight hours I returned periodically to update the passage of the sun and the shifting colours. 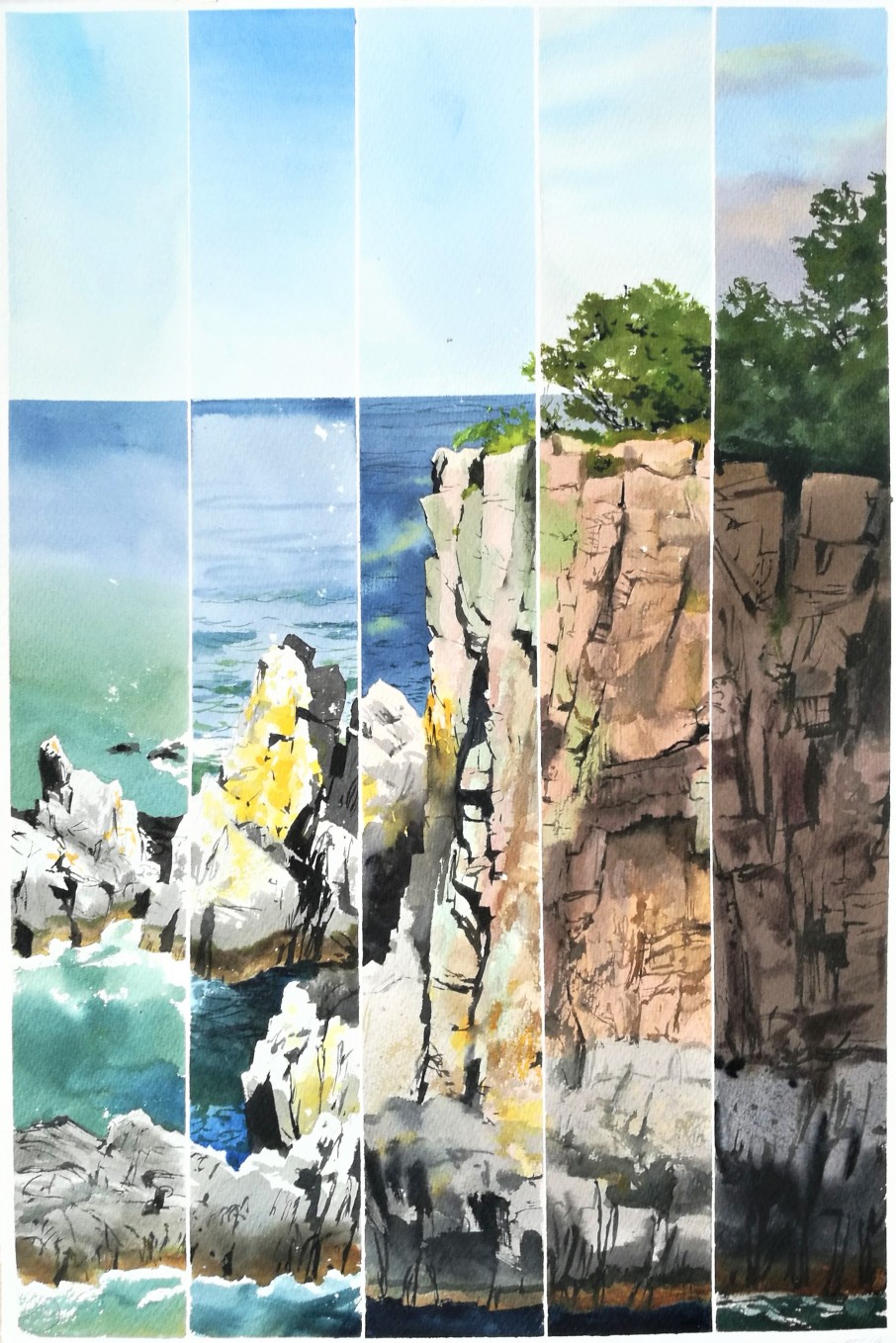 A little further along, I found another vantage point and started another slice painting of Lyseklippen (‘Torch cliff’). When I wasn’t shuttling back and forth between these two pints, I walked down to the vertiginous steps to the Sorte Gryde (The Black Pot), a deep cavern in the face of the cliffs. The Sorte Gryde and other caves in the region were formed by wave action eroding the diabase magma that had filled cracks in the gneiss bedrock, and testify to the fact that Bornholm’s coastline was higher than that it is today. 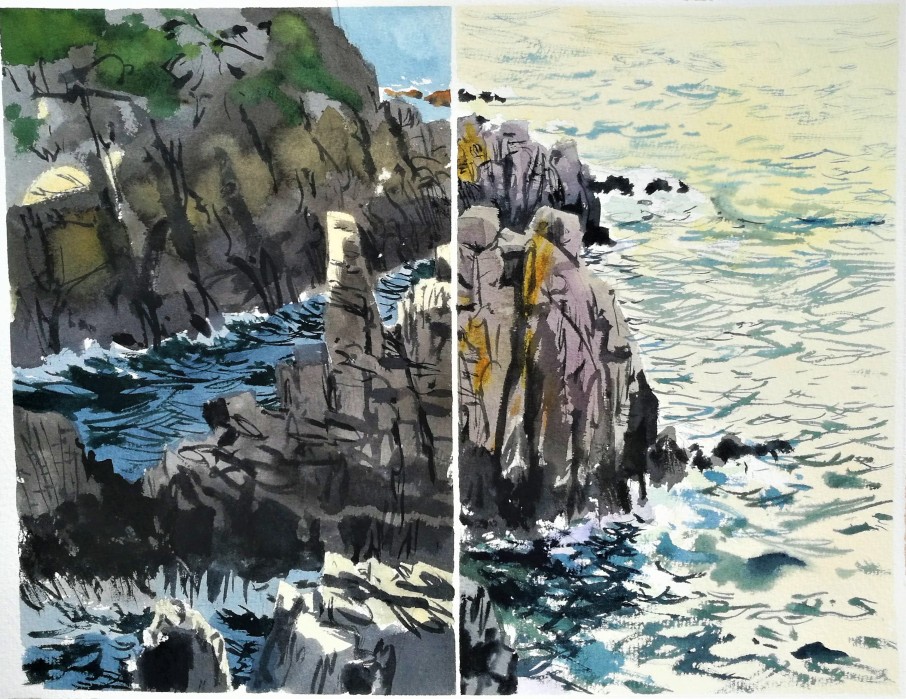 As the day reached its end, I paused to watch the sun set just behind the headland to the north-west. I had not managed to sleep and was absolutely shattered. I packed my things and walked back to the main road and back to my waiting car at Døndalen.

Weather report = Mostly sunny all day with a few cloudy periods in the late afternoon. Temperature between 9 °C in the early morning and evening and 17 °C in the afternoon. Wind between 1 and 3 m/s from all directions. Visibility: fantastic. Hours of sunshine: 13 hours .

Lessons learned – it was good to be free from carrying my chair, but my back was messed up when I got home form not being supported for over 16 hours. I need to find a lighter chair. Next time, I NEED to take a longer break.

Other stuff = Strange lack of birds around the cliffs. Not a single nightingale heard.

In my head = …Luck and our awareness of it. How often have I looked up at JUST the right time and had the good fortune to see a rare bird passing by? But how many times have birds passed me by without me knowing? When I have been in the wrong place at the wrong time? This got me thinking about the link between good luck (=bird watching) and car accidents (=bad luck). How with birds you are aware of your good luck, but not the ones you missed. Where with bad luck, you are only aware of the times you ‘crashed’, not all the innumerable ‘close shaves’ (…at the time, gazing out over the sea, it all made sense and seemed quite profound…). Teenagers, Trust. Forgiveness. Parenting. Being involved. 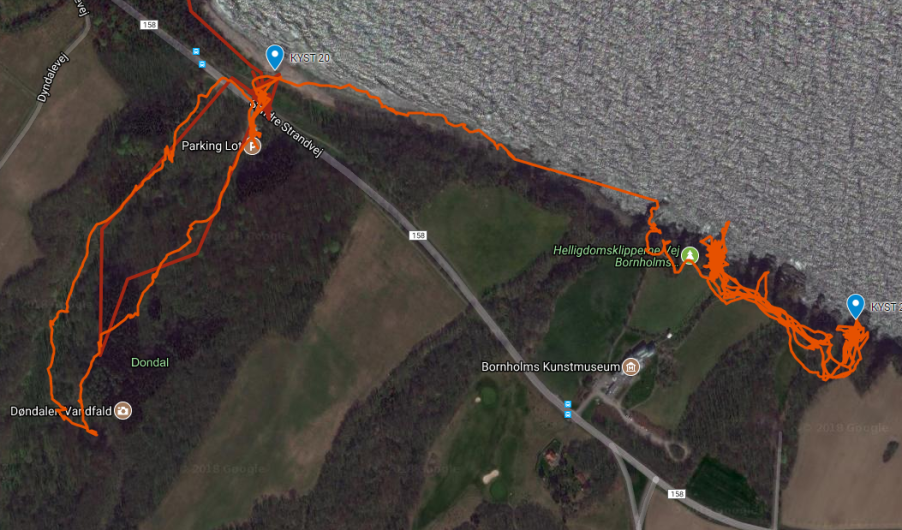