For at læse denne KYST 19 blog på Dansk, se her… 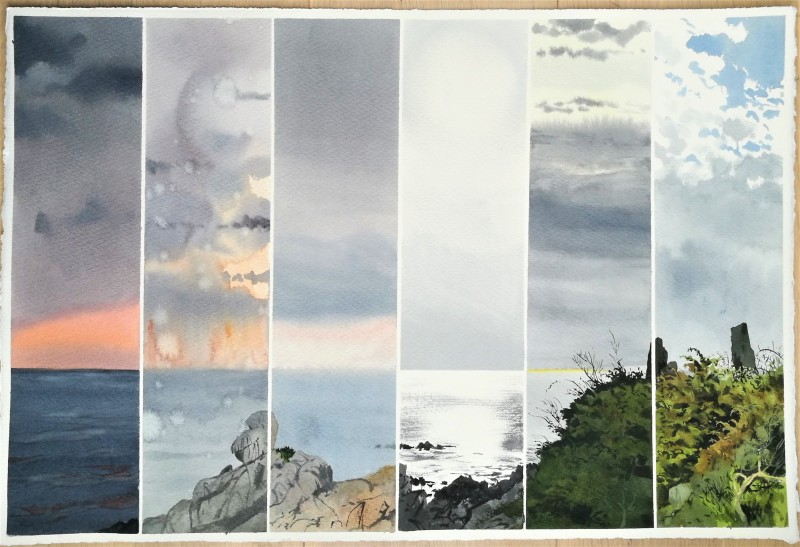 KYST 19 As I arrived back at Stammershalle, I could still see distant flashes and rumblings in the leaden sky from the huge thunderstorm that had kept me awake a few hours previously. There was no wind and the dawn air was mild, but there were intermittent light showers and the dark sky threatened. There was a peculiar rose-orange glow where the rising sun was hidden by the thick cloud layer. The smell of the rain and the cool air felt rejuvenating and I was keen to get started. Instead of painting from the same place where I had finished the week before, I decided to break with tradition and concentrate on the sky.

Stammershalle is a huge gneiss promontory with commanding views of the eastern coastline of Bornholm between Sandvig and Gudhjem. No wonder then that the site is riddled with graves, standing stones and other archaeological artefacts all the way from Bornholm’s first Paleolithic settlers to the Iron Age. I wandered around and soaked up the atmosphere, to a constant twittering of linnets, whitethroats and yellowhammers. To the west I could see changes in the weather and I quickly set up a ‘slice painting’, recording the changes in the sky and light over a period of several hours (see top).

Looking north back towards Tejn, groups of eider ducks were hauling out in the sheltered bays between the rocks. With my telescope I admired the crisp graphic shapes of the dumpy eider drakes. 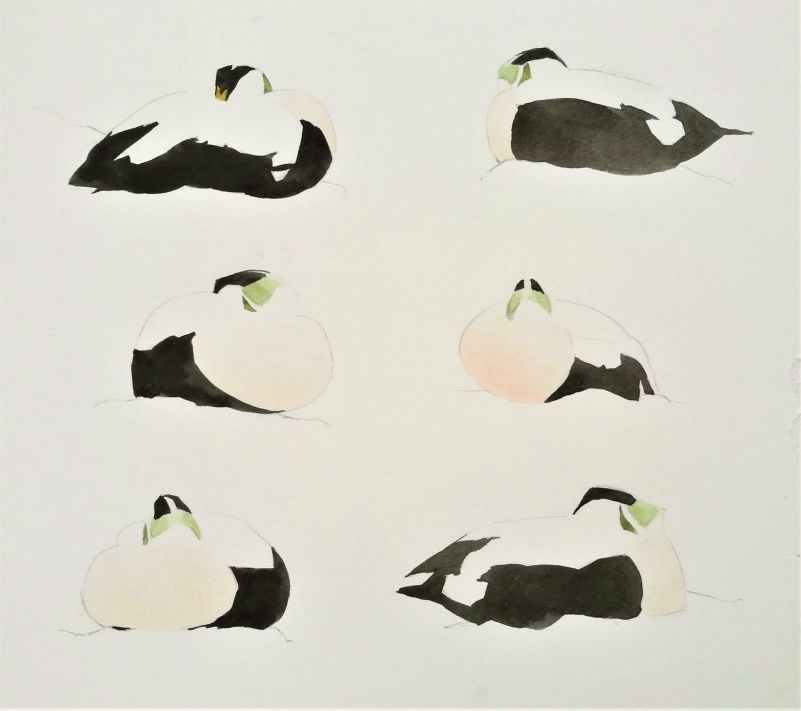 A little closer, a pair rested on the rocks, the drake preening vigorously while the duck looked on admiringly. 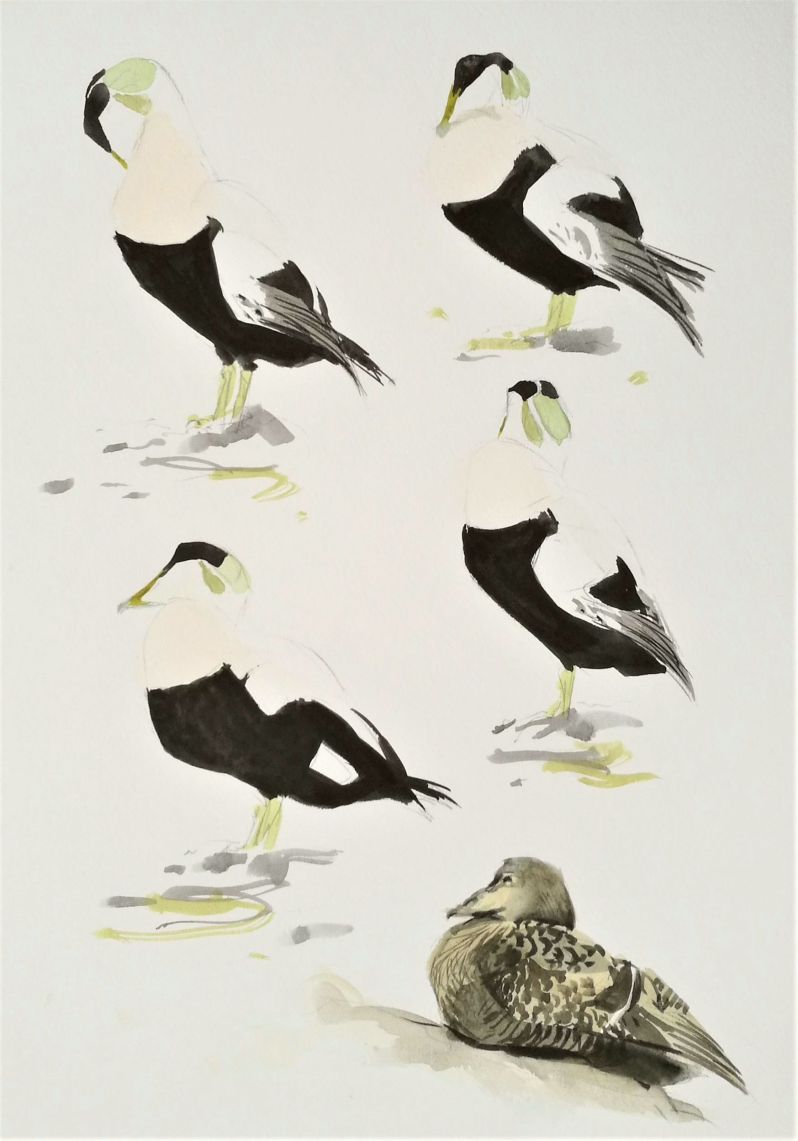 Eventually I packed my things and walked on through the drizzle. Heading south east I kept to the rocky shore away from the coastal path close to the road. Again, this part of the coast felt little-visited and I took it slowly, taking frequent rests and gazing at the rich and undisturbed habitat, the wild orchids and tadpole-filled rock pools. Eventually I came to a small pebbly beach where I set up my M60 and made some lunch. The weather was changing all the time and a fog rolled in, obscuring the Helligdom cliffs from view, to the south. 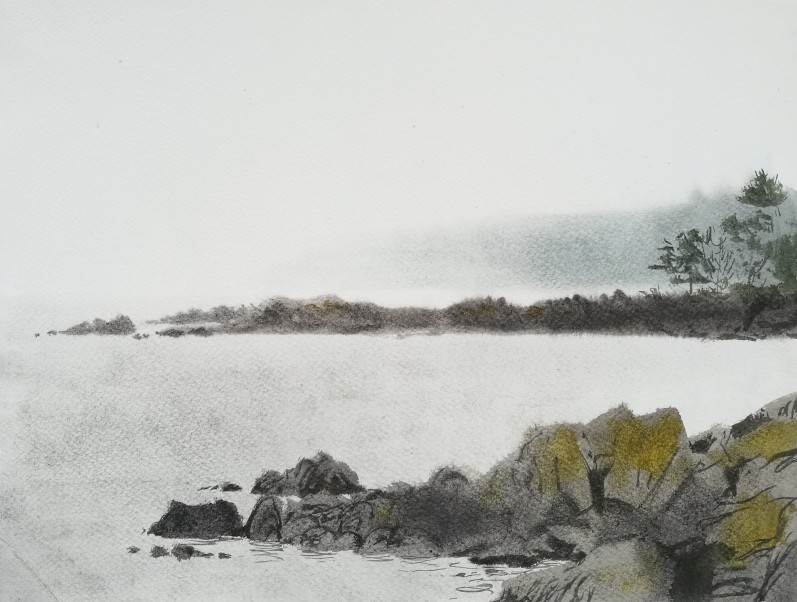 Completely and wonderfully alone I ambled in the sprawling woodland skirting the beach and watched a pair of sand lizards engaged in some strange courtship dance – the female’s jerking her arms in a curious way before darting suddenly off, only to be tracked down by the persistent male in his emerald finery. A group of resting eider drakes bobbed around in front of me oblivious to my presence. 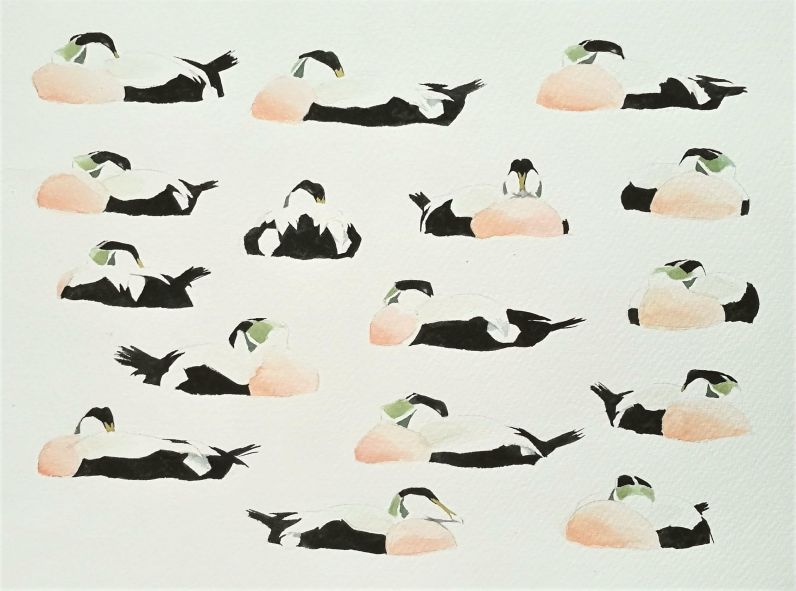 The fog dissipated and the sun broke through the clouds for a few moments. I couldn’t stop myself painting more eiders, one of my favourite subjects. 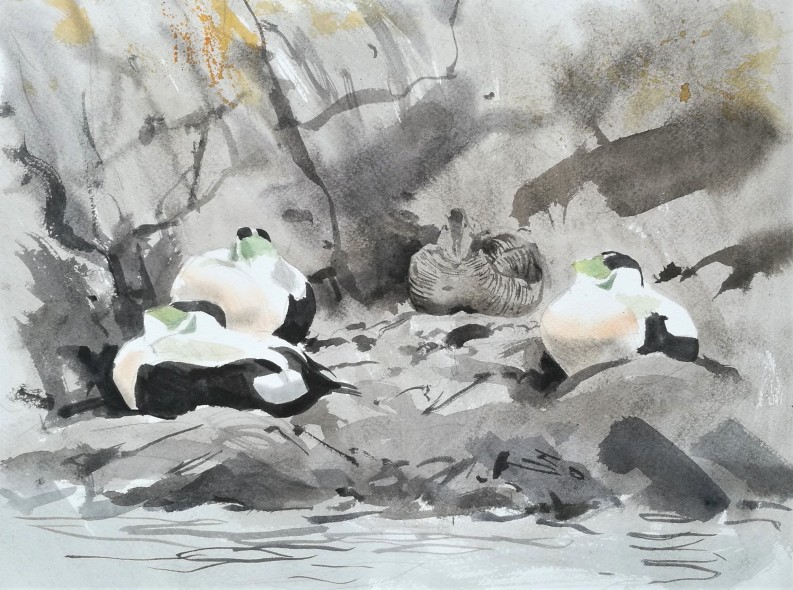 I painted to the chack and rattle of the thrush nightingales that were just setting up their territories all the way around Bornholm’s coast. A more visible KYST companion are the white wagtails constantly flitting between the rocks on the shore

I was tired and had already been going for nearly eight hours – and yet the day was only half started. I couldn’t sleep and ambled onwards. The going was tough over the rocky and pebbly shore and I cursed all my equipment. I walked past the tiny harbour at Bådsted, a little-known jewel of a place, and through wild growth of nettles, to arrive at another rocky headline. Here a colony of common gulls screamed and yelped at my arrival.

With time, however, the gulls settled down and returned to their nests. I sat and drew portraits of one gull who sat not three metres from me, her button-like eye staring at me reproachfully. 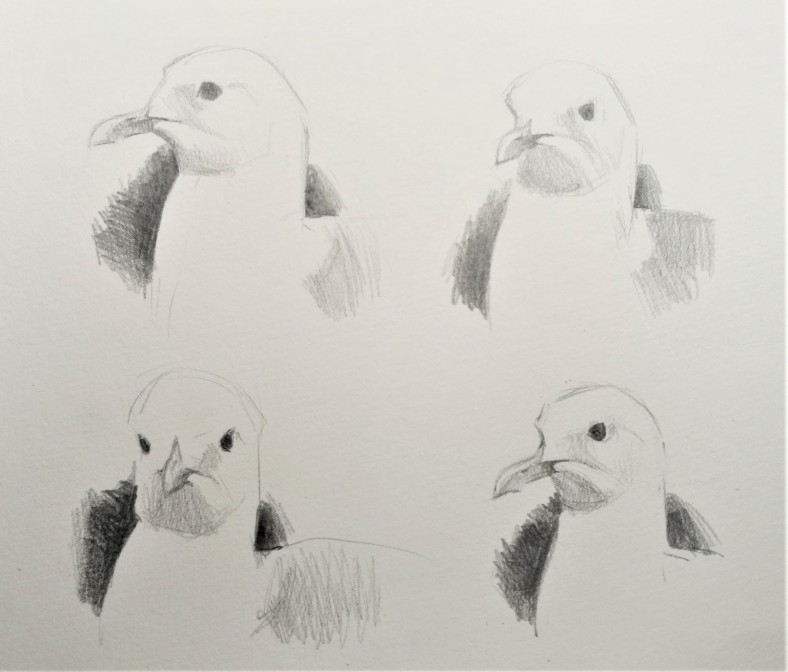 Eventually I continued on to a large stony beach, hidden from the busy road by a thick and overgrown wood. Birdsong and the wonderful smell of cherry blossom and wild garlic emanated from the trees. I wandered along the woodland path and marveled at it all. The white anemone and cherry blossom had now peaked and had been replaced by the constellations of wild garlic flowers. The elm and wild cherry trees wore fresh new leaves, with the alder and ash not far behind. I partly felt the need to record this floral abundance for the KYST project, and felt almost guilty that I had concentrated so heavily on eiders. But I was tired and was content looking.

I walked on, over rocky capes and pebbly beaches, until I eventually made it to the mouth of the Døn stream. Here a valley cloaked in thick forest carries the stream in to the heart of Bornholm, so I made a detour and wandered around the woods, hoping I might spot a dipper. I didn’t and returned to the coast, where I painted a large tree in two sections. I was dead tired now and finished off just as the sun was setting behind some thin clouds, momentarily casting a golden light over the nearby Helligdom cliffs, next week’s destination. 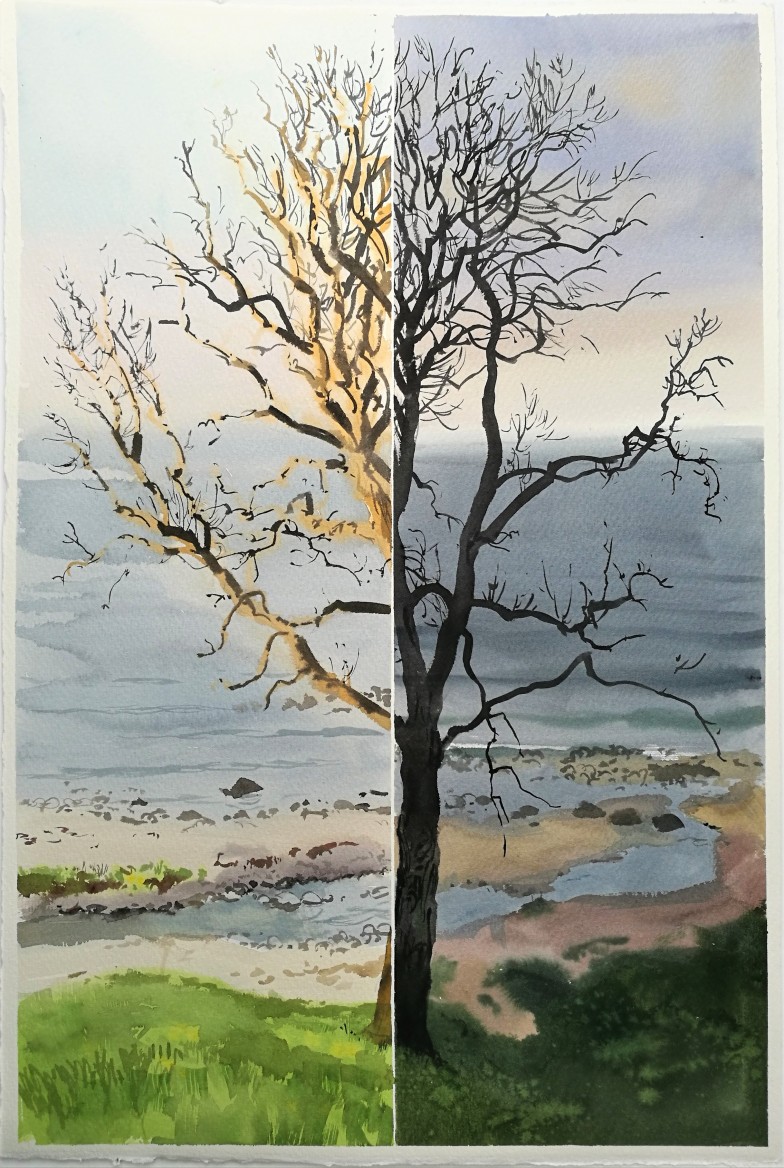 Weather report = Overcast with scattered showers in the early morning and early afternoon. Foggy periods with the sun breaking periodically through. Temperature between 10 and 15 °C. Wind between 2 and 3 m/s from the northwest. Visibility: good to poor. Hours of sunshine: 2 hours .

Lessons learned – if you see something that really catches your eye (a flower for instance) don’t think, ‘I’ll stop and find another one later’, ‘cos you won’t.

Other stuff = perfect weather conditions for the whole day really…. The smell of a seabird colony is such a special odor – unlike any other I know – and one that always fills me with excitement and reminds me of Scotland, Bass Rock and the Seabird Drawing Course

In my head = …driving over to the island to Stammershalle at 4.30 in the morning, I took the ‘bumpy road’ skirting the Rø forest. Just as I crested one of the small hills a car (another car – at 4.30!) shot over the hill in the opposite direction. We were both towards the middle of the road, and possibly a little over the speed limit, and we must have missed each other by a matter of inches. It was so close and so sudden that I was completely shook up, heart pounding, and for the rest of the day I was plagued by ‘what if’ thoughts. Just one metre to the left and it would have been game over. Crazy.