I recently worked on an illustration commission for NaturBornholm, one of Bornholm’s premier visitor attractions. Geologically speaking, Bornholm is the only place in Denmark where traces of dinosaurs can and have been discovered, and NaturBornholm have put together an exhibition based on the (quite limited) footprints, teeth and other bone fragments that have been found in the last century or so on Bornholm.

Without the ‘wow factor’ of huge skeletons, NaturBornholm decided to commission some really quite incredible dinosaur models from a Copenhagen based company called 10tons and create a family friendly but informative exhibition. The models are life-size, feel incredibly real, and are about as close as you can get to standing beside a living dinosaur. I was commissioned to create a series of illustrations to support NaturBornholm’s exhibition narrative.

A bit of a dream commission really… but pretty much everything I do is rooted in ‘live’ observation in some way or other, so I was a little out of my comfort zone. But, as everyone knows now, birds are dinosaurs, and this fact – together with a childhood spent perched on the kitchen table drawing innumerable prehistoric creatures – meant that I felt confident enough to take on and complete what turned out to be quite a large commission. My watercolours and drawings were blown up and printed on 2m high partition walls, together with the text and some of the objects. 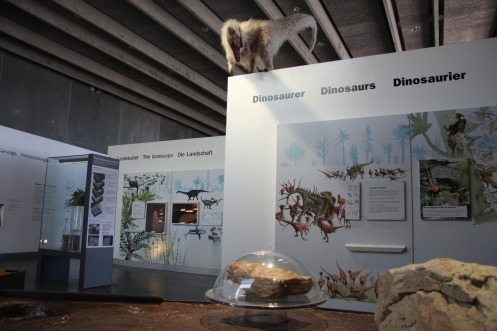 NaturBornholm has just taken delivery of some new dinosaur models, which will be placed out in the open, outside the visitor centre, and the next part of the commission is to create some illustrations supporting these models, with activities for families and so on. Updates will be coming…