Just back from a week-long sketching and painting trip to the wilds of Estonia… We were four – myself and three bird, flower and plant experts /nerds – and we used every opportunity to watch, collect, observe, photograph, listen and draw and paint (me) the local flora and fauna. The song of the Cuckoo and nightingale were our constant companions. 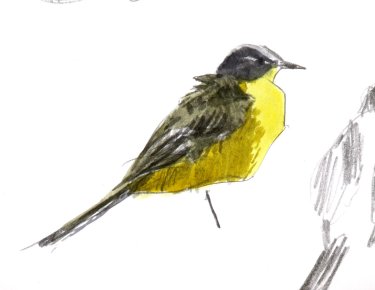 The whole country (at least what we saw of it) is heavily forested. Very flat and rather unspoilt. The population density seemed very low, and we saw only fleeting glimpses of the locals. Based on my mostly hire car-based superficial musings, there seemed to be a strange mixture of things going on – on the one hand an obviously neglected and decaying Soviet-era industrial and agricultural infrastructure, but juxtaposed with an assured Nordic sophistication and an influx of Euro-wealth (at least, in the metropolitan centres). Non-existent signage to a bird tower, but with a beautifully translated English description. Weird.

We started off by basing ourselves deep in the woods by Lihula, where we made several trips to the forests and marshes in the surrounding areas. Whilst we missed out on the big concentrations of migrating birds, and were perhaps a little early for the flowers, there was still lots happening and passing through. Highlights included a HUGE flock of Barnacle Geese (6,000? All of which at one point put up by a sea eagle, which were also very numerous)

and an obliging Lesser Spotted Eagle. We then moved on to Sareemaa (an island) where I stayed put while they went off looking for orchids. We spent the last few days just north of Haapsalu where we went looking for marshes and bogs.

At one wonderful location there were Black Grouse, Montague’s Harriers, Black Kites and Lesser Spotted Eagles all flapping about  in front of me. Almost too much to take in. Amazing.

Anyway, I ended up getting lots of sketching done – actually mostly of birds I see here at home – but the light was good and the birds were performing. Some House Martins collecting mud for their nests… 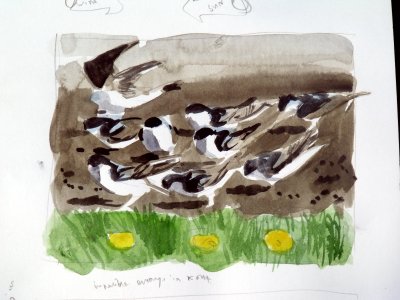 some back-lit Swans battling a strong wind…. Yellow Wagtails prancing about on some sleeping sheep… the monotonous song of the Great Reed Warbler… these are some of the things I took back and will be working on… And thanks to my companions for taking on the lion’s share of the organising, planning and driving… 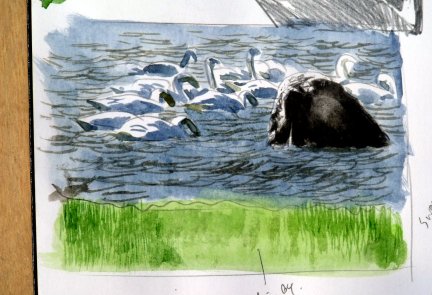