For at læse denne KYST 39 blog på dansk, se her 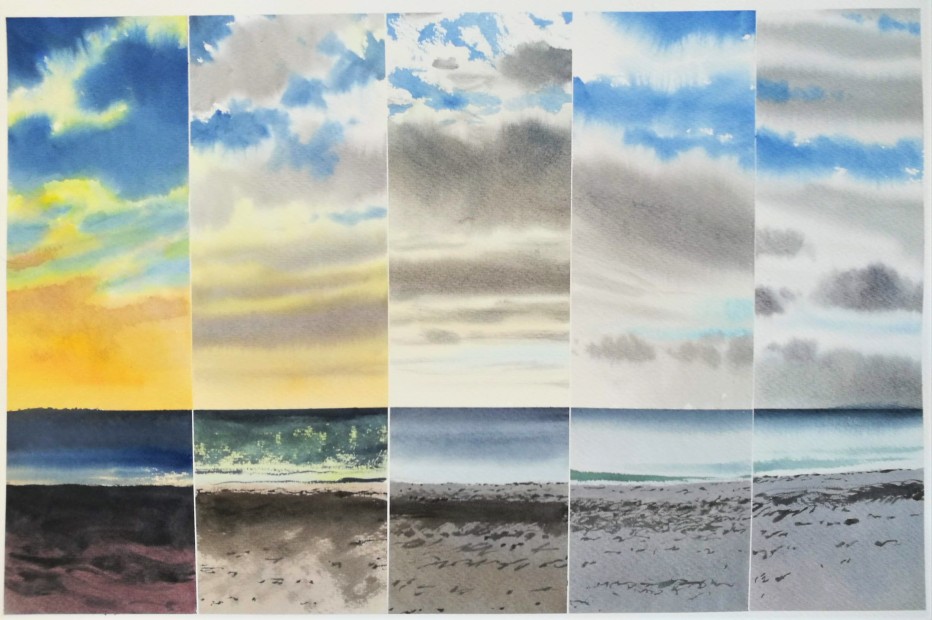 KYST 39 Clad in gloves and a wooly hat for the first time in many months, I quickly unpacked my things and welcomed the sunrise on the broad sandy beach at Bethesda. The cold, clean air seemingly added to the clarity of the unfolding vision, and I began working on a slice painting, working from left to right and recording the changing colours and brightening of the day (above).

I wandered around the beach for a while. There had been storms and strong winds since last week’s trip, and it was fascinating to look down and see the innumerable sculptures and patterns carved into the sand by the wind and waves. Islands of searocket stood facing the wind like ships in a petrified ocean, while the sea grasses further inland inscribed delicate arcs on the sand in the wind. 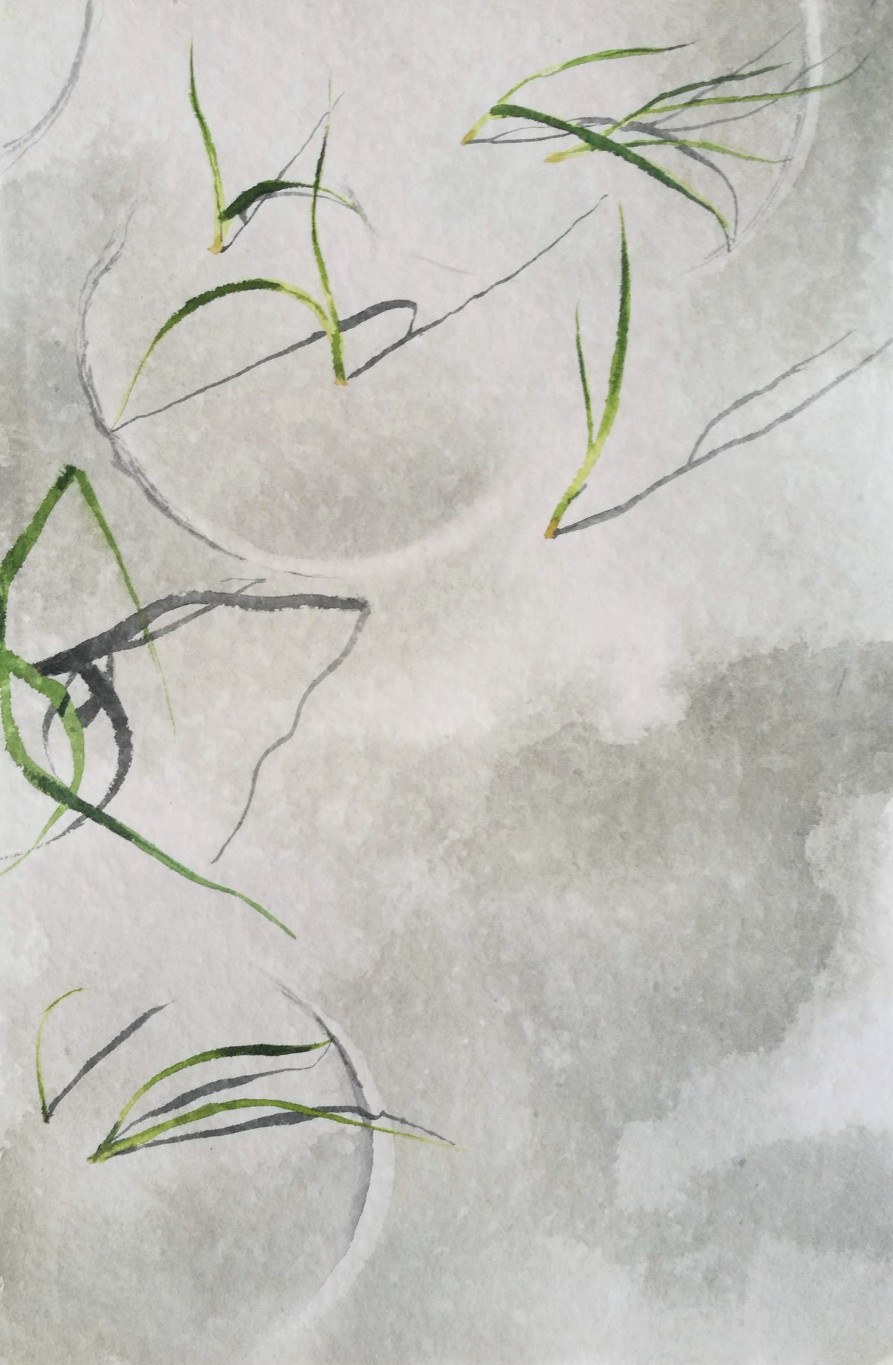 Closer to the sea, tiny stones and pebbles balanced precariously on teardrop shaped platforms of sand, sculpted by the ceaseless action of the wind. There were landscapes, worlds, universes unfolding with every step, and it felt so far removed from the lichen covered granite boulders I had been walking through just ten or fifteen kilometres away, or a month or so ago. 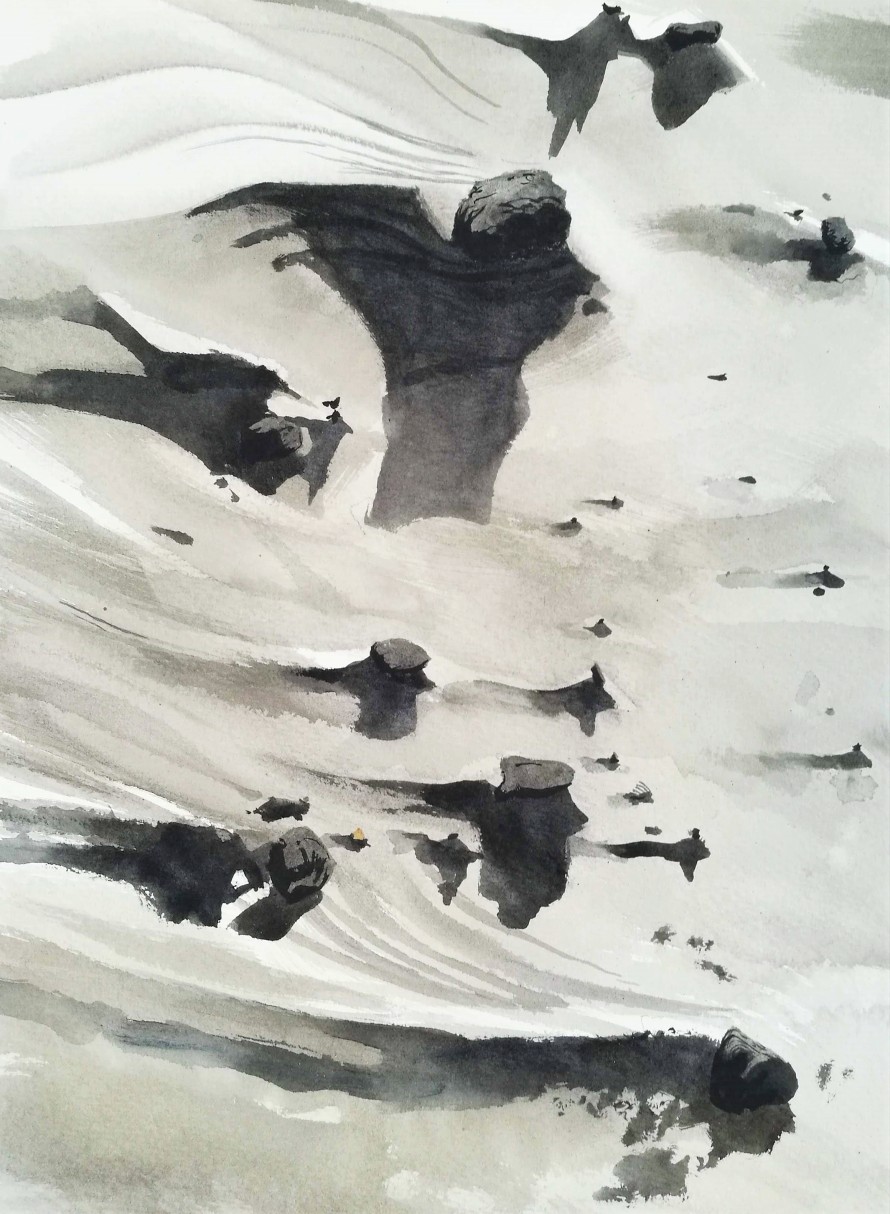 Eventually I managed to pack up my things and walk along the shore. Dog walkers and joggers ambled by and the day felt fresh and invigorating. The water was high, and waves sometimes flooded the beach creating temporary lagoons, where wagtails and waders picked amongst the seaweed. The sea, sand and sky together formed a reflective kaleidoscope of changing light and shifting patterns, an ephemeral vision of muted tones and restless energy. 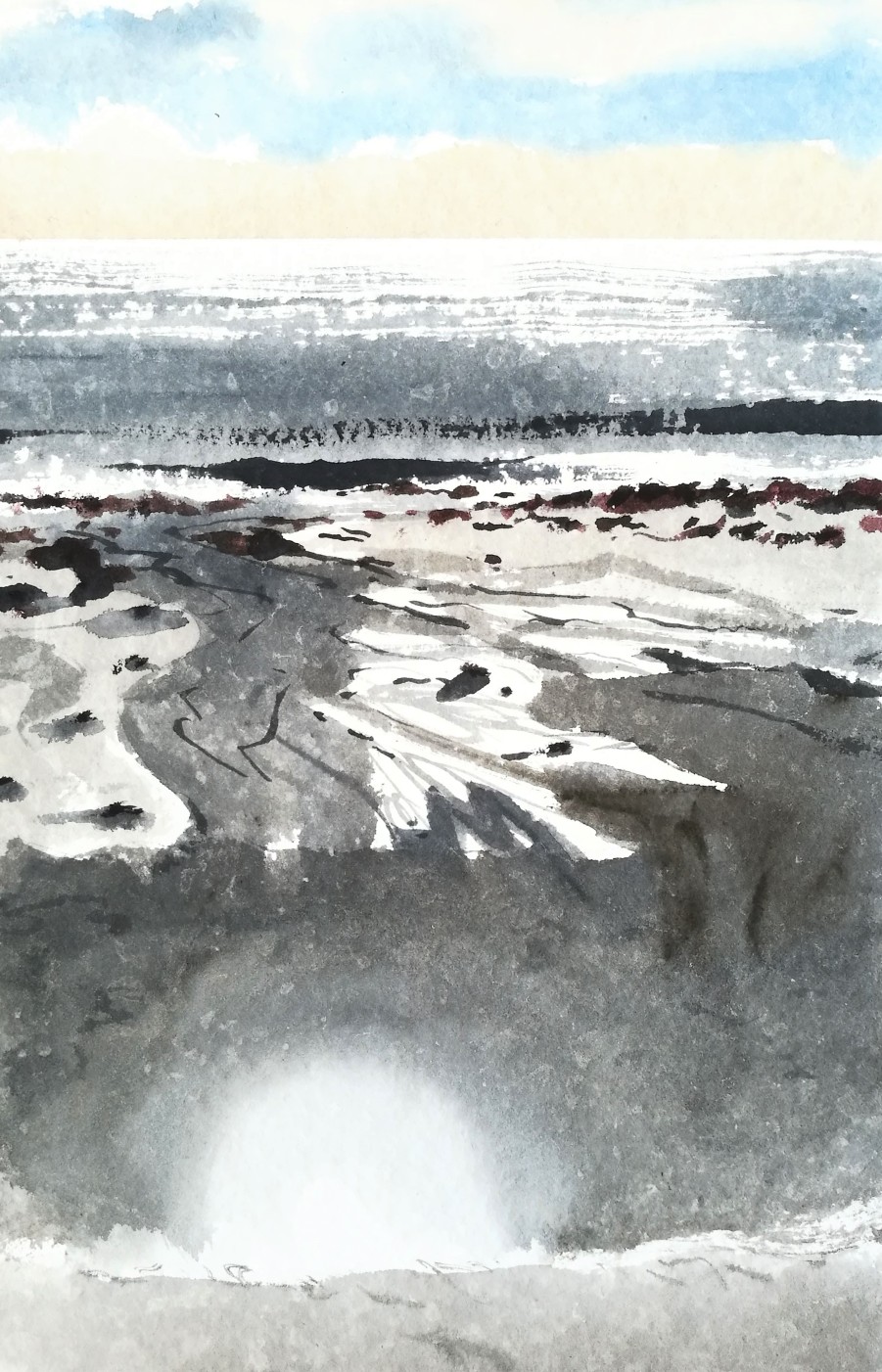 I stopped for lunch, under slept and exhausted, but was driven by a need to keep going, to explore and record. Looking south towards Dueoode, the day’s destination and Bornholm’s southerly point, the sun was reflected on the horizon, below columns of distant cumulus clouds. Though the temperature was only 14 degrees, it felt warm out of the wind. 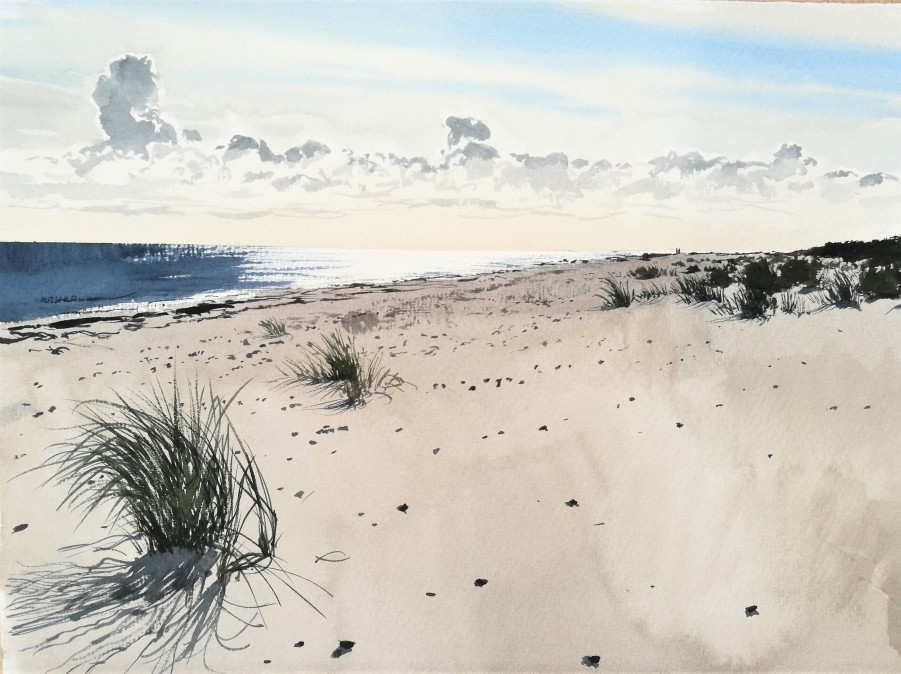 On the shore not far from where I sat, I suddenly noticed a Little gull cavorting on the waves together with some Black headed gulls: the first time I had seen one so close and for such a long time. I wondered at the tiny bird, enjoying the wonderful sensation of acquainting myself with the special and unique characteristics of a new species.

Further on still I couldn’t help looking at the wind carved pebble trails in the sand. 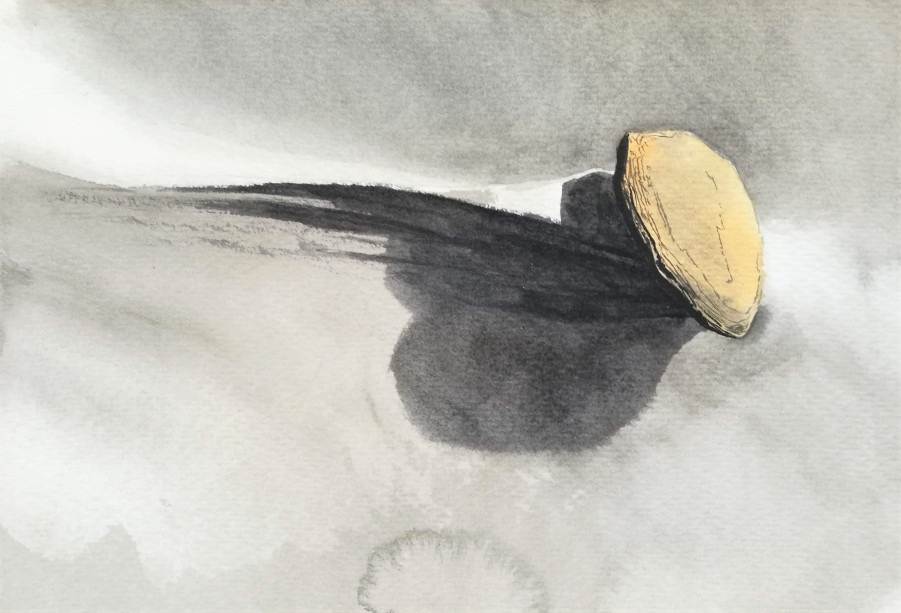 I felt confused and tired, not really sure where to look or where to concentrate my gaze. At the same time, the sound of migrating birds filled the air. Earlier I had seen white tailed sea eagles circling above together with a red kite, while hobby falcons darted along the coast after dragonflies, and I didn’t want to miss out. The day was racing by, the shorter days really noticeable. The shadows were longer now, and the colours even more enriched and intense. 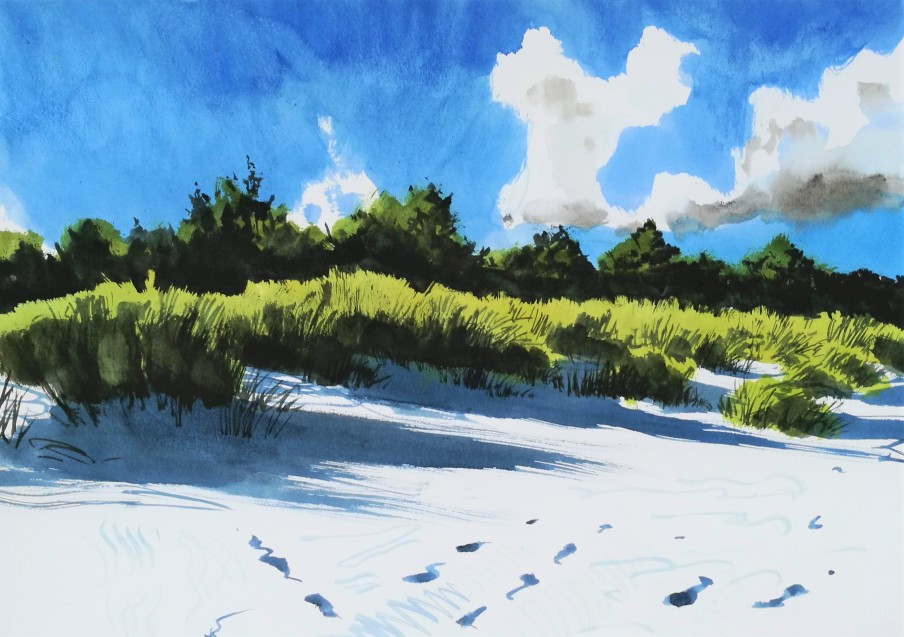 I reached the day’s destination, Dueodde, an hour or so before sundown. Here on Bornholm’s southern corner, I stood – three quarters of the way around the island and about to head west for the first time. I began to paint the clouds reflected in the lagoon, but regretted not painting a slice painting as the cloud bank slowly changed from cream, to yellow, then orange to vermillion, to finally the most delicate rose pink. 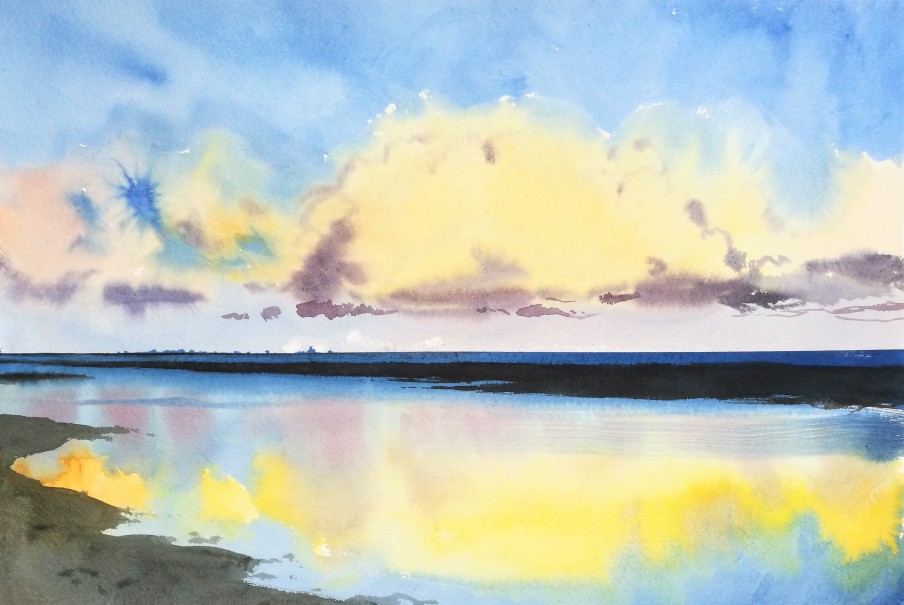 Weather report = Sunny for most of the day with a few cloudy breaks. Temperature between 10°C and 14°C, though it felt warmer in the sun. Wind between 10 and 14 m/s from the northwest. Hours of sunshine: 9 hours.

Lessons learned – tent pegs in the sand do not hold down the M60 in the wind.

Other stuff = Feeling sorry for myself and a little under the weather the whole day, despite the fine weather and the opportunity to spend all day outside. Shattered when I got home.

In my head – overwhelmed by the incredible visual feast and the migrating birds. 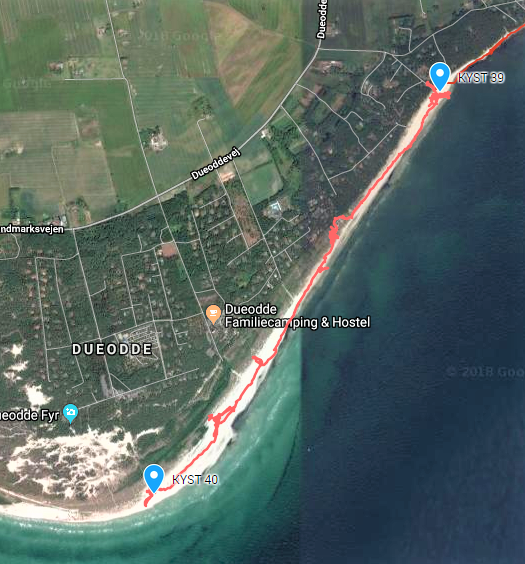