For at læse denne KYST 32 blog på dansk, se her…

KYST 32 Great clouds of swallows and martins flittered and chattered around the harbour at Årsdale, but the screaming swifts from last week were gone, with just a few stragglers remaining. The rising sun was obscured behind a thick bank of cloud over the horizon, and the day was warm despite a strong offshore wind. I got to work, making sure to include the lamppost from last week’s final painting (far left). 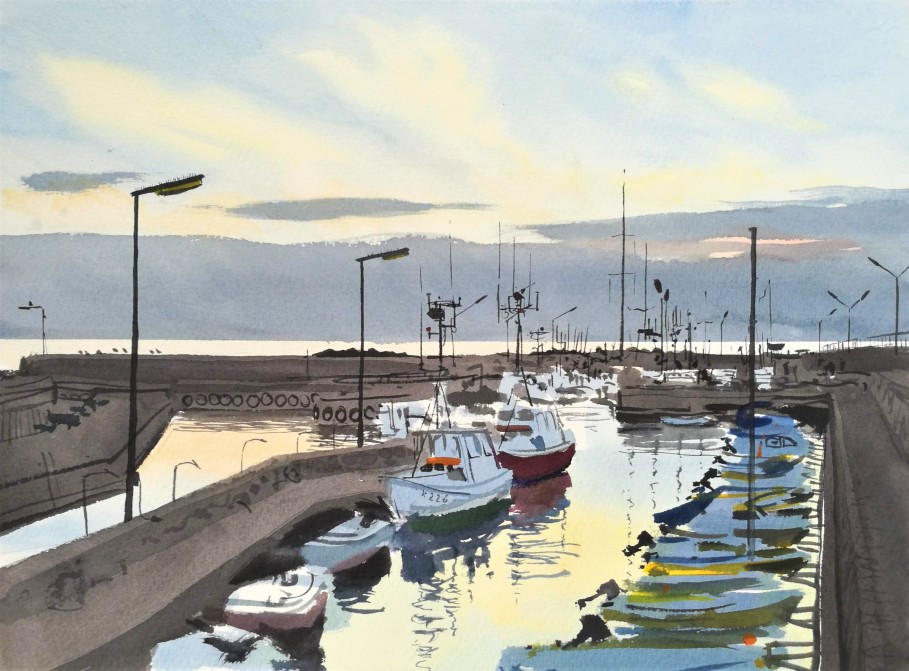 By the time I had finished a few returning fishermen were sorting the night’s catch. A group of older men shared a coffee by the harbour, some dog walkers appeared, and life returned to the village. Commercial fishing vessels still frequent Årsdale’s harbour and the village retains an authentic charm, without being too touristy.  I walked around the harbour, past the volunteer run shop and stopped by the boules club where I sketched some herring gulls enjoying the morning sun. 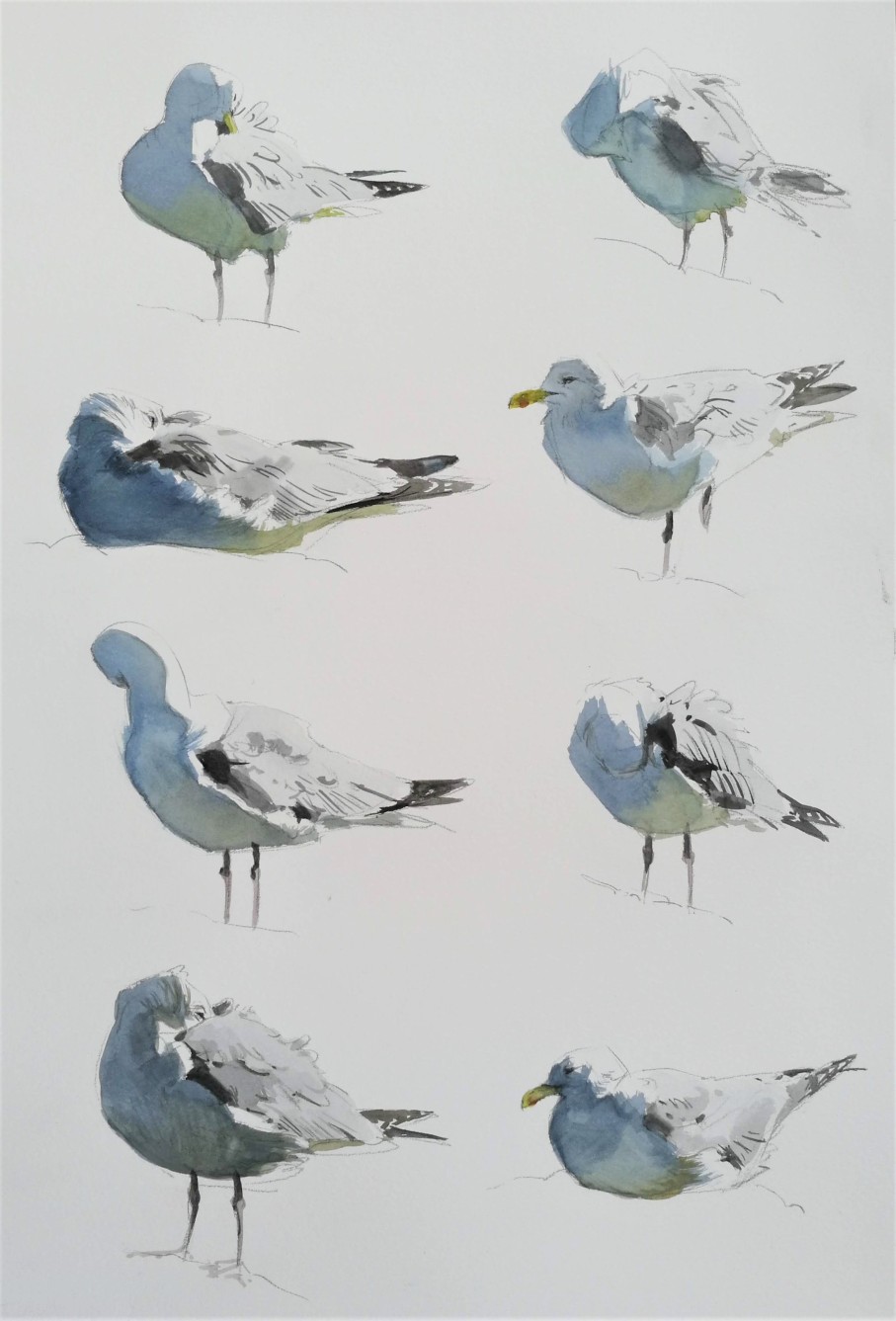 The gulls were perched on one of the many rocky islands surrounding the harbour, the granite characteristically rounded and smooth. 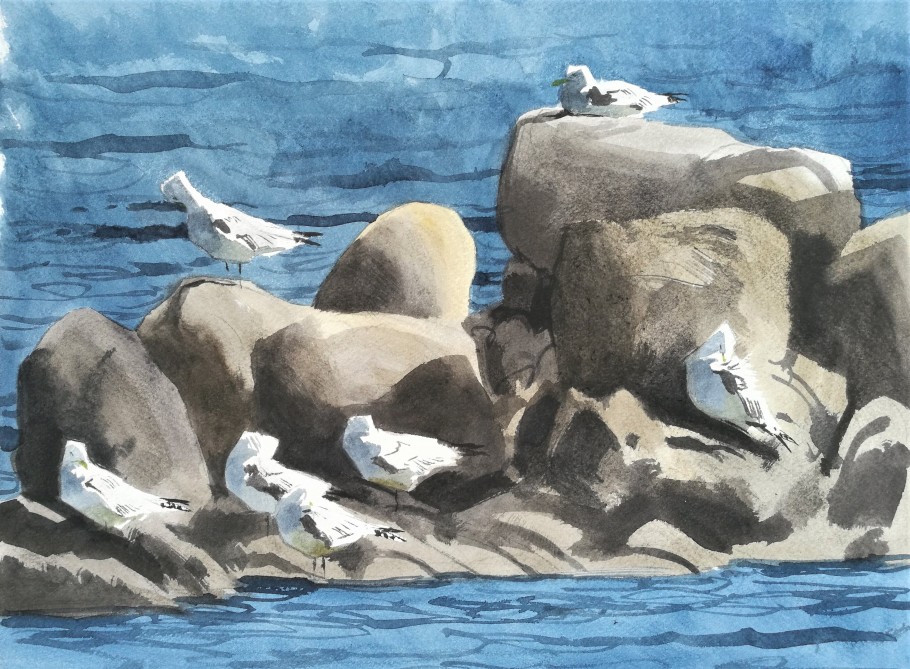 I carried on around the coast and walked along the rocky shore, past wonderful houses with fantastic views of the ocean. Banks of threatening clouds rolled in and the wind increased to a gale. After weeks of sun and blue sky, the day felt invigorating and energizing.

I continued heading south over the boulders and rocks, disturbing the ubiquitous common sandpipers that seemed to be strung all the way along the shore. Further on still, gulls, cormorants and a pair of swans perched on a large rocky island just metres away from the shore. I sheltered from the wind under my M60 and spent the next several hours working on a ‘slice painting’, recording the changing light and skyscape. By the time I had finished, the day had brightened, despite the forecast rain (see top)

In a break between slices, I sketched the plants by the shore. The willowherb now with white downy seeds, and a huge wild celery completely dry and gone to seed.

Just as I finished, I was mesmerized by a tiny red spider mite running around on my paper. Remembering Paul Klee’s quote ‘… a line is a dot that went for a walk’, I decided to get the mite working on my behalf and set him on a new piece of paper, where I followed his path with my pencil.

Eventually I moved on and carried on along the coast, sometimes taking the coastal path when the going was too hard. I passed the granite boulder-strewn beach at Skåret and continued to Gulhalds Batteri, an old coastal entrenchment with fine views back towards the lighthouse at Svaneke. Here an open landscape of hawthorn and juniper was grazed by some very friendly horses. The yellowhammers and linnets were practically silent now, and I hadn’t heard a whitethroat for weeks.

Heading towards Svenskehavn I paused by some rocks, cut deep with scars of diabase. The green fringe of seaweed surrounding the rocks was very visible. The tides at Bornholm are very weak, and I had never noticed the green seaweed so exposed, but someone I met on the path explained how the sea on this leeward side of the island had been ‘pushed away’ by the powerful wind and atmospheric pressure. I looked back at the slice painting I had finshed earlier I had noticed how I could see a fringe of green seaweed around the rocks on the last ‘frame’.

At Svenskehavn I finally had some food and a good rest. The irritating gusty wind started to die down a little just as the sun approached the horizon and the colours began to turn. I made two quick studies as the colours really increased in intensity, but wished I had made another one or two, as the orange turned to crimson and then a wonderful pinkish-rose.

Weather report = Mostly cloudy with sunny intervals.  Temperature between 19°C and 23°Cthough it felt cooler in the shade and the wind. Wind between 7 and 11 m/s from the west.  Visibility: good. Hours of sunshine: 5 hours.

Other stuff = As I sat by the water painting the green seaweed, a movement by my right hand caught my attention. Looking down, I saw that a small mink – completely oblivious to me – was sniffing around the bag by my feet. I stayed still but made a squeaky noise and it stared at me for what seemed like ages, obviously trying to work out what I was. It showed no fear and at one point actually walked over my shoe. Crazy.

In my head – The weather. The rain that never comes. Armageddon. The aftermath of all the family visits. As I ran back to Årsdale harbour to collect my car, I wondered how I had sat there in the dusk with my brother exactly one week previously. Crazy too. 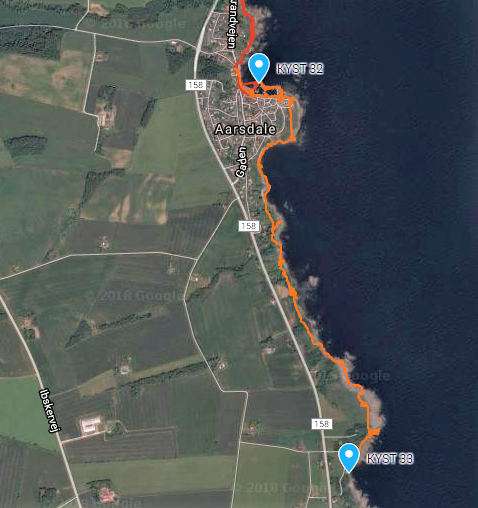