For at læse denne KYST 29 blog på dansk, se her… 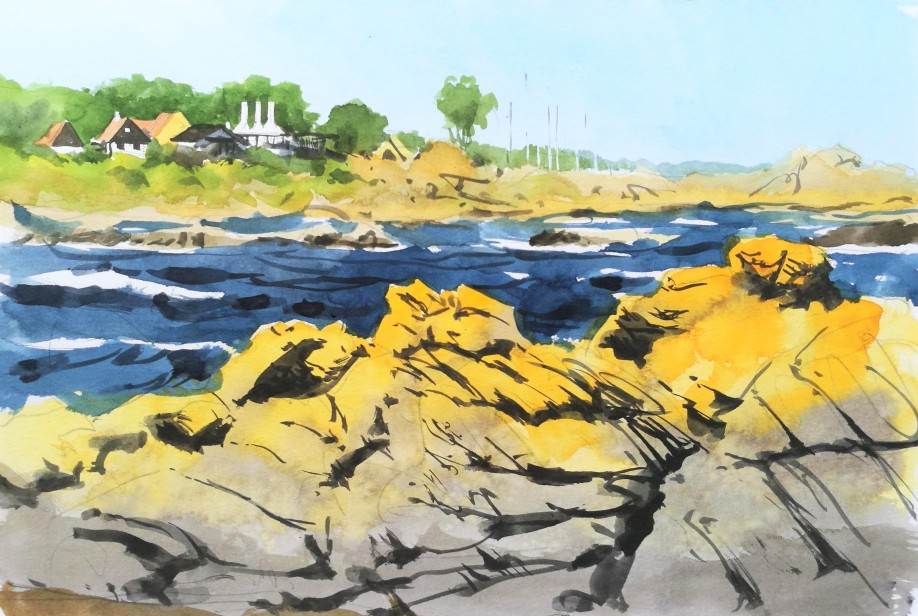 KYST 29 The single day of rain we had last week turned out not to have heralded the end of the drought, much to the chagrin of the local farmers, and the hot, dry sunny weather has continued. I arrived back at Listed to clear blue skies and a fresh northwesterly. I got straight to work, painting the rising sun reflected in the windows of the harbour buildings.

Walking through the harbour flooded with a golden light, I sheltered from the wind behind a wall, where a random collection of shadows and objects caught my attention. 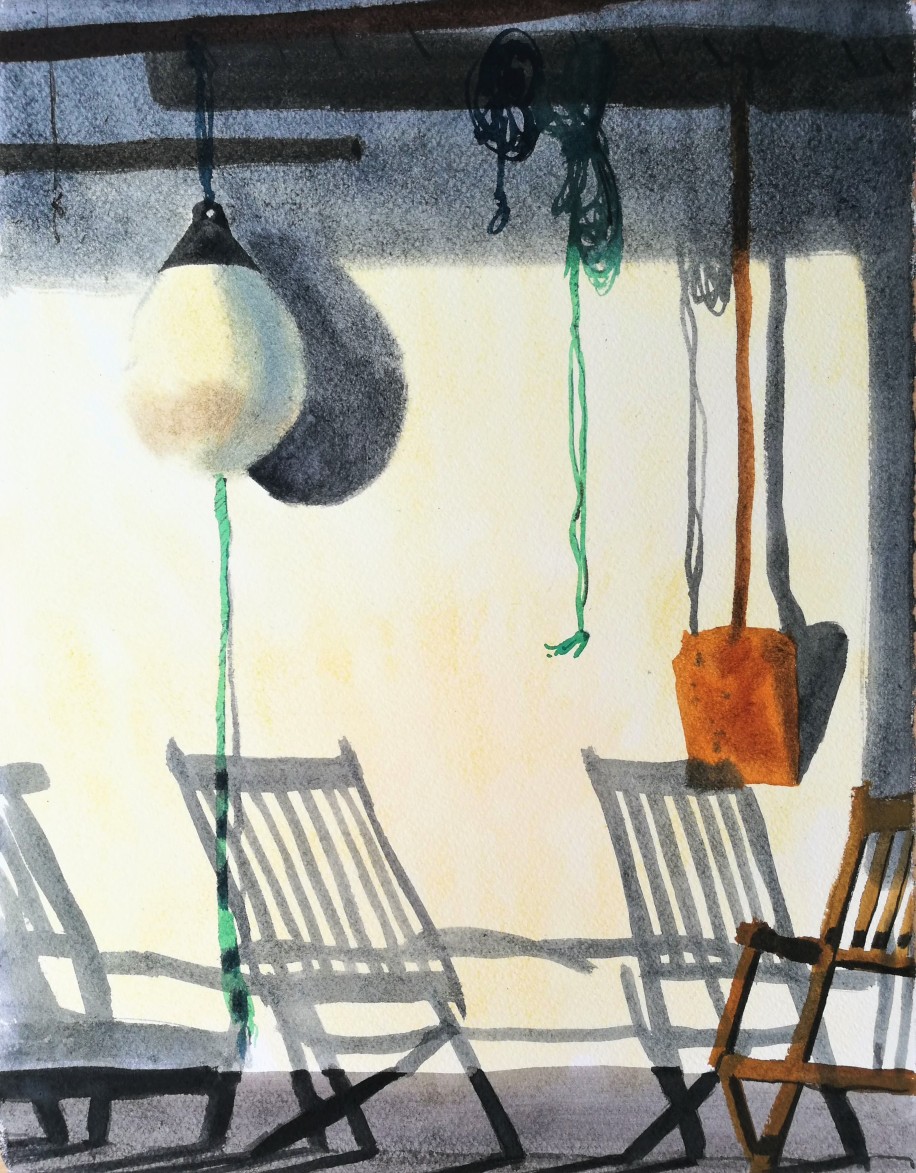 I had an appointment with a journalist from the local radio station for a live interview. While I waited by the harbour arm I painted a pair of mute swans contentedly sleeping by the shore. 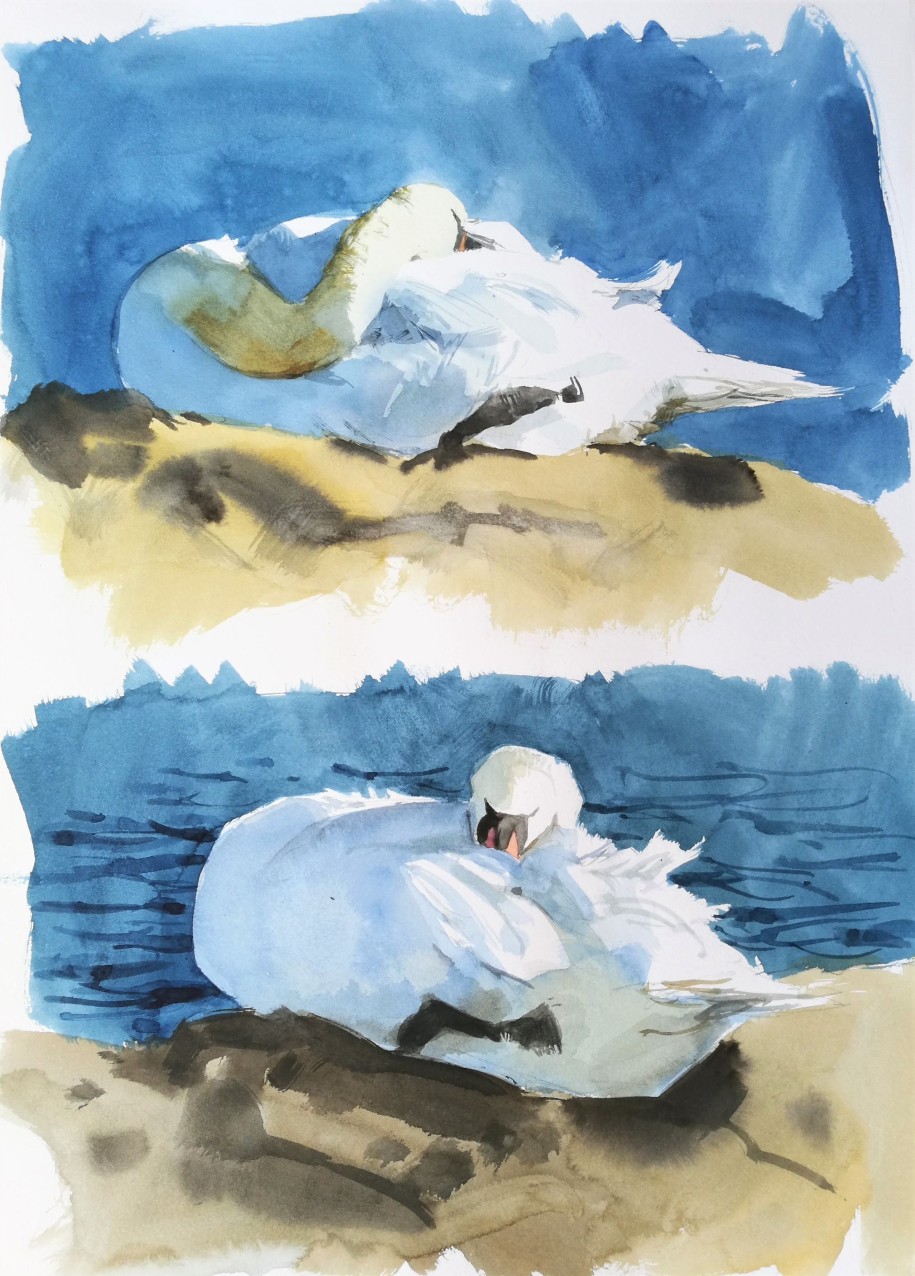 When we were done I stayed for a while and sketched the teenage eider ducks hauled out on rocks in the surf. I have been following the development of the eider ducklings over the last couple of months or so, and it was amusing to see them almost full size now, but retaining a downy fluff on their rumps.

I packed up and walked on – to Gule Hald, a rocky peninsula on the east side of the harbour transected by a huge diabase vein, as well as smaller veins of sandstone.

A little further on, just past the Vasa stream, I looked back towards Listed and tried to capture the energy in the wind that had now picked up a little (see top). Further on still, I came across another vein of diabase cutting through the Svaneke granit. Here the difference between the rounded coarse-grained granite and the dark, angular fine-grained diabase was particularly obvious. It was incredible to imagine how, millions of years ago, tensions in the earth’s crust had caused the granite to fracture and crack, allowing magma from the core of the earth to force its way into the fissures and solidify as dolerite.

I walked around ‘Møllenake’ – the rocky and dry terrain between Listed and Svaneke. Apart from single bird, the warblers had mostly stopped singing now, and the majority of the wild flowers had run to seed. It felt like a genuine summer’s day, and the unfamiliar soft doughy shapes of the Svaneke-granite contributed to the sensation of having passed through some sort of temporal and spatial portal or milestone into a new Bornholm – subtly different to the one I had walked through over the last two or three months.

The low humidity, wind and overhead sun meant that the watercolours dried instantly and it was almost impossible to paint. I decided to make small quick sketches of the rocky shapes as I walked through the shorescape towards Svaneke, recording the intensifying colours as I approached the end of the day and my target, Vigehavn – the smokery chimneys of which can be seen in the last ‘frame’ of the painting.

I finally crawled into the little harbour at Vigehavn and sat exhausted at the end of the pier, while screaming gangs of swifts swooped and plunged overhead.  With my pencil I traced their flightpaths on my paper and the darkening sky.

Weather report = Unbroken sun the whole day. Temperature between 18 °C and 22°C. Wind between 4 and 8 m/s from the northwest. Visibility: good. Hours of sunshine: 16.5 hours.

Lessons learned – don’t put your favorite paintbrush on a boulder where it might fall and never be seen again. Don’t sit by a rubbish bin while painting birds, or people putting rubbish in the bin will cause the birds to fly off…

Other stuff = There were quite a few young herons flying slowly north-east into the wind along the coast through the day. I watched a pair land on a rock, where a large family of eiders was resting. The slender graceful herons and the dumpy squat eiders seemed surprised at the sight of one another and faced off awkwardly, the eiders eventually succeeding in putting the herons on their way again.