For at læse denne KYST 27 blog på Dansk, se her 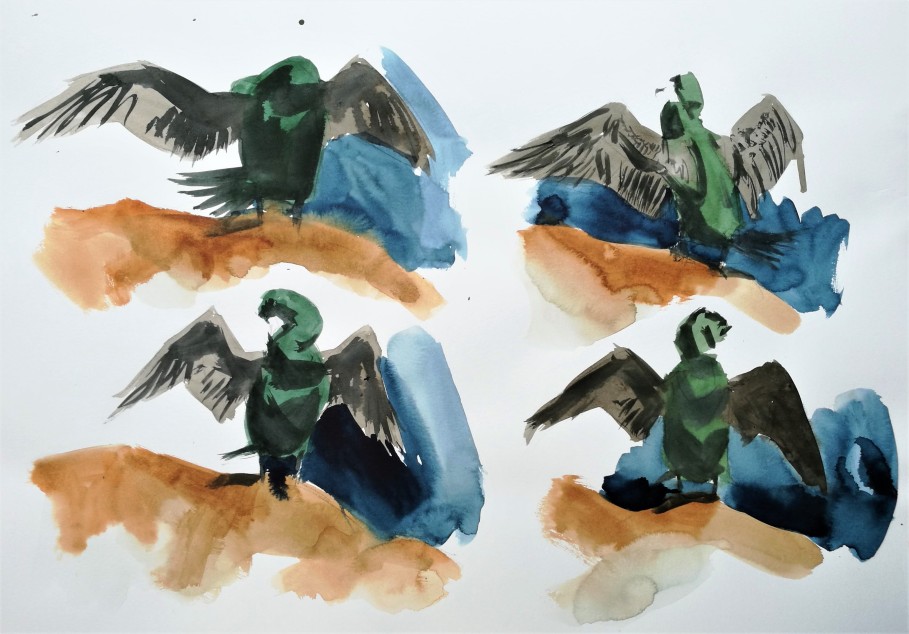 KYST 27 The rising sun was at first obscured behind a distant cloudbank low over the horizon, but in no time it had risen free and flooded the day with warming light. From my elevated vantage point on the side of a hill looking down to the coastal path and the sea beyond, I consumed the day and the ever-changing panorama spread out before me. There was no wind, and no sign or sound of humanity. The liquid twittering of skylarks filled the air, periodically broken by the mew of a buzzard or a pheasant’s sudden crow. A squadron of screaming swifts passed low over the field, and I felt submerged in a rare moment of harmony. 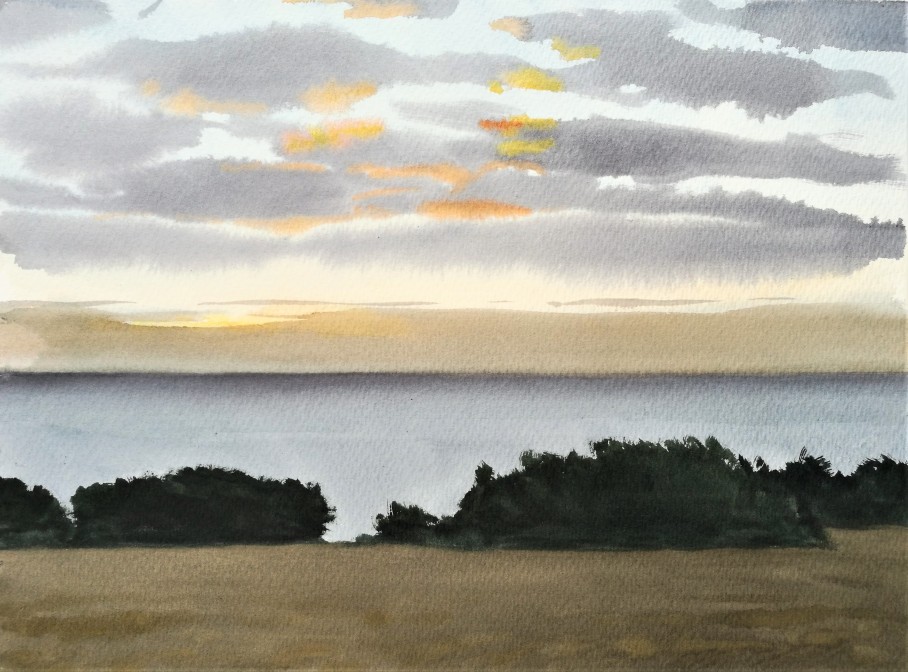 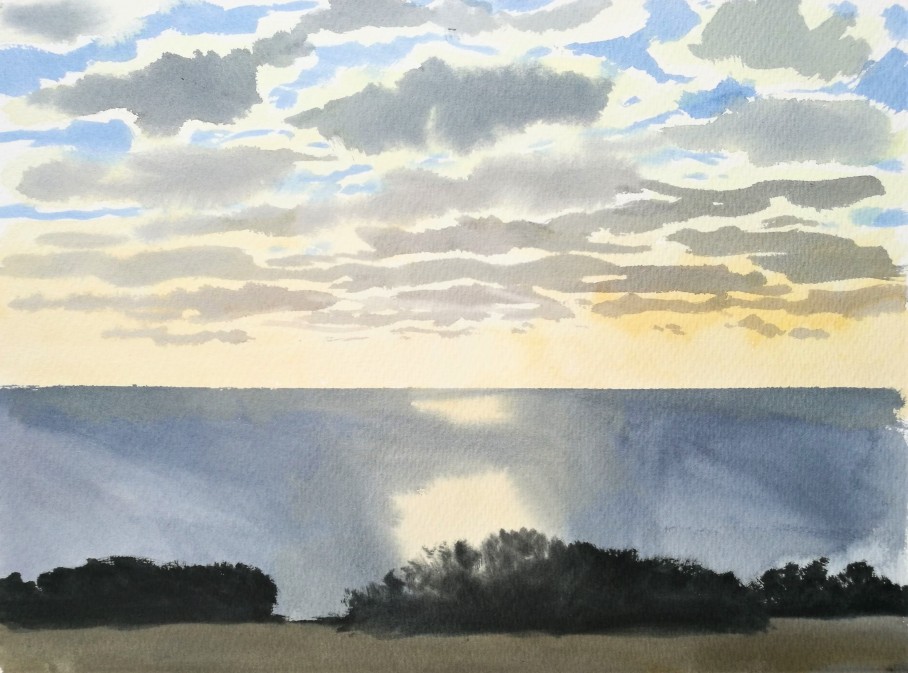 Eventually the moment passed and I packed my things and headed down to the coast. As before, the coastal path was divorced from the rocky coast and I continued for a while, until I came to a path down to the shore. I had arrived at Ypnasted, a tiny fishing hamlet with a few wonderful old houses spread along a stony beach, the wharf overgrown and long since bereft of fishing boats. I tried to walk back along the coast to see what I had missed, but the going was difficult. I paused by a ‘jættegryde’, where wave-thrown rocks had polished and worn the bedrock smooth over many millennia – its position high above today’s high water mark testament to the changing sea level of the Baltic sea since the last ice age.

At Ypnasted the pebbled beach from the Littorina sea, when the sea level was higher than today, is particularly obvious. Here I sat and looked northwest, painting the profusion of wild flowers. In the reed bed to my right a solitary reed warbler chirruped and grinded his hypnotic song. 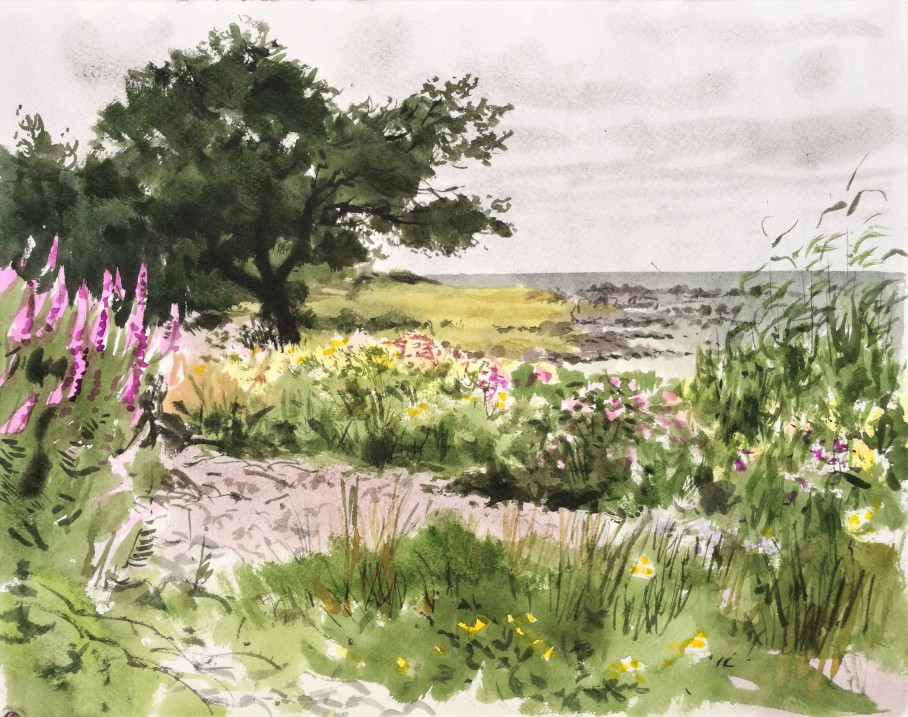 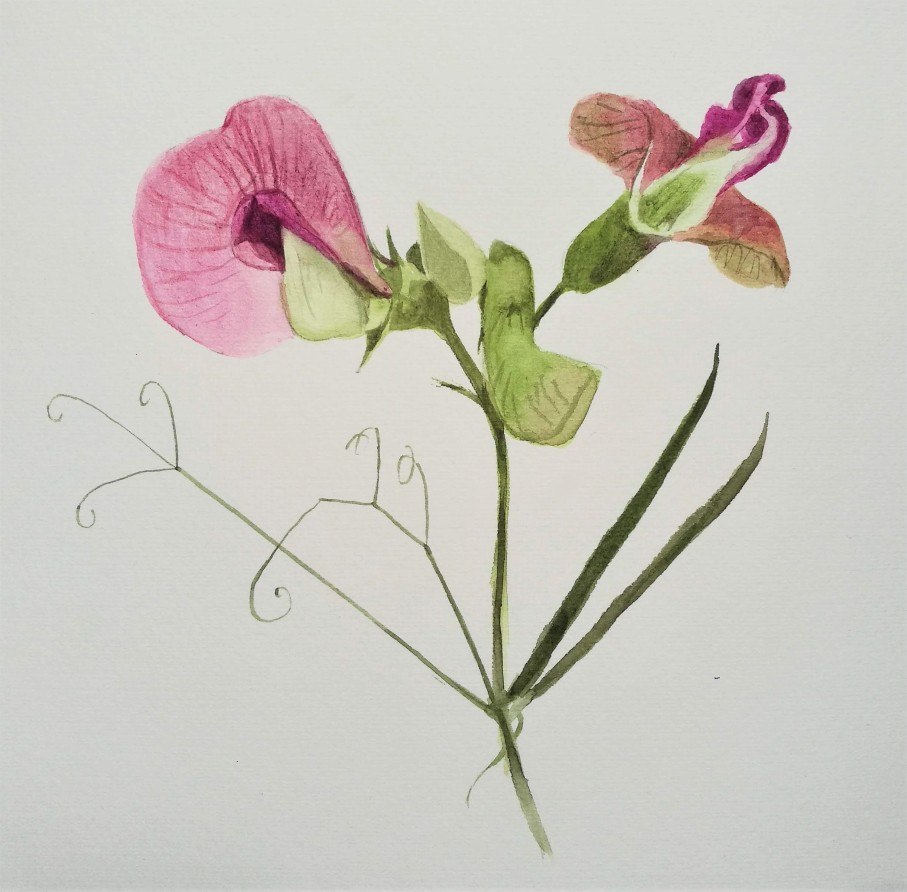 I pushed on, but once again the coastal path headed into a wood, far from the shore. Eventually I took a very small and unkempt path which led me to the rocky shore, a wonderful and wild area where I managed to eat and sleep. The gneiss bedrock was layered and flat in places, with some of the most flamboyant lichen I had seen. 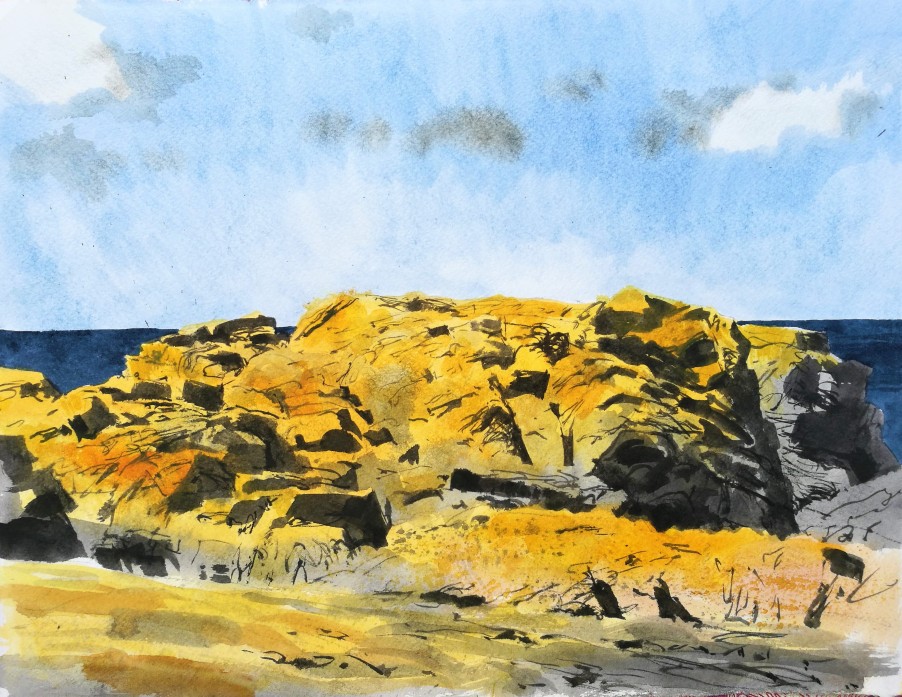 I had woken to a fierce sun and a blustery wind, but feeling refreshed I decided to keep to the rocks instead of heading back to the path. The going was hard and I was forced to stop for a breather every 100 metres or so, but I was rewarded by some truly wild and remote coast. The ongoing drought had killed off all but the most hardy grasses and plants, and the dead grass crunched underfoot as I passed over dried out pools and empy streams. Pausing on some rocks before I reached Bølshavn, the day’s destination, I sketched some gulls basking in the sun. The blustery wind suddenly threw my water pot onto my painting. The tranquility of the morning had long since evaporated in the hot sun.

I painted the cormorants drying their wings on the rocks. I worked quickly and energetically, eager not to get caught in detail that often results from low humidity and sunlight (see top). 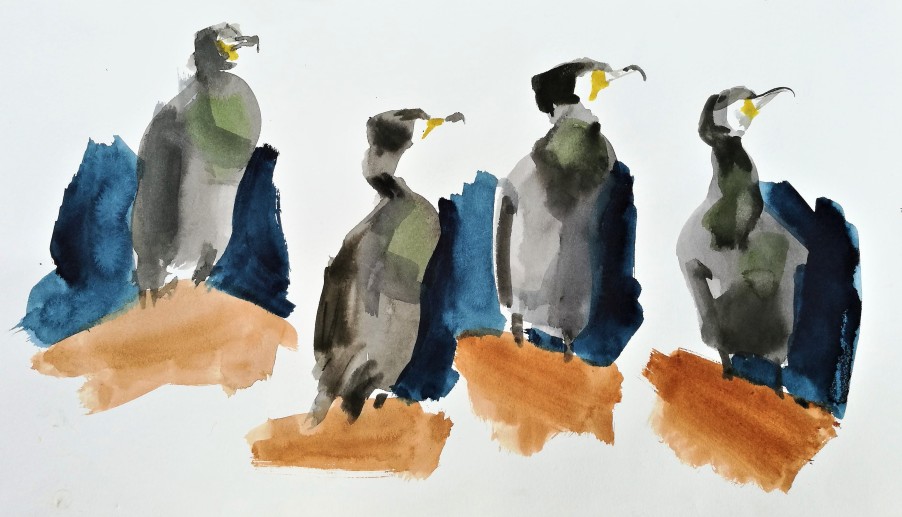 Just before Bølshavn I stopped on the pebbly beach for a much needed break and some food. I was exhausted and spent, though the day offered still three hours of sunlight. I wandered around Bølshavn aimlessly, another quaint and picturesque fishing hamlet long since taken over by tourists and summerhouses. I found it difficult to muster up enough energy for a final assault, and I floundered and fussed around. Eventually I positioned myself at the end of the harbour arm and witnessed the changing colours of the lichen covered rocks as they were lit up and then deserted by the setting sun behind me. 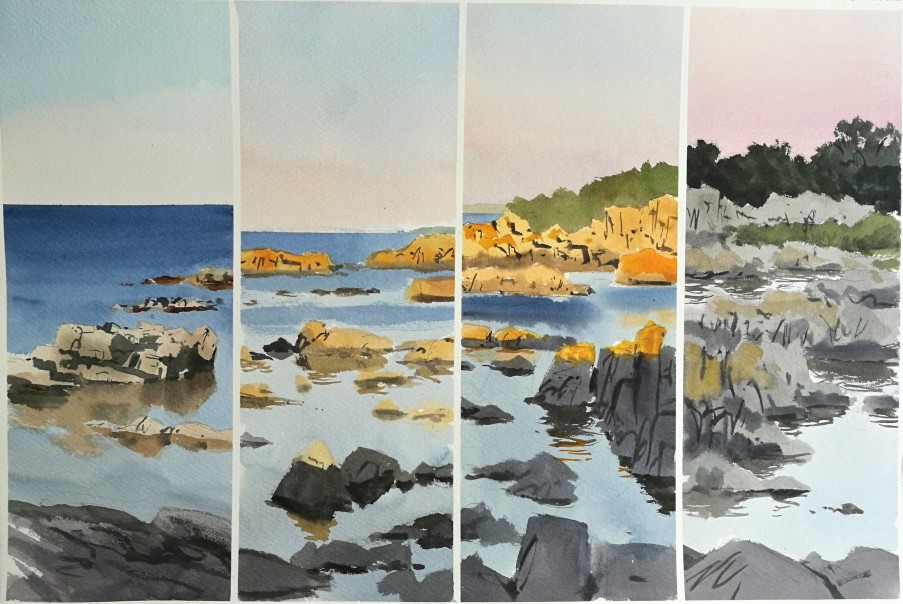 Weather report = Overcast to start with, then sun in the afternoon. Temperature between 17 °C and 22°C (though it was baking in the sun). Wind between 4 and 6 m/s from the west. Visibility: good. Hours of sunshine: 7.5 hours.

Lessons learned – tape your painting down if its windy…

Other stuff = when I began the KYST project in the winter, people were few and far between, but would often pause for a brief chat on the coastal path. Now, there are more people about, but no one approaches me or talks to me. Either I have managed to create an air of hostility, or people are less interested in the hot weather (tourists?). Probably a bit of both…

In my head – The Patrick Melrose novels again, the books have really infested my head. England-Sweden. Cormier-Miocic. 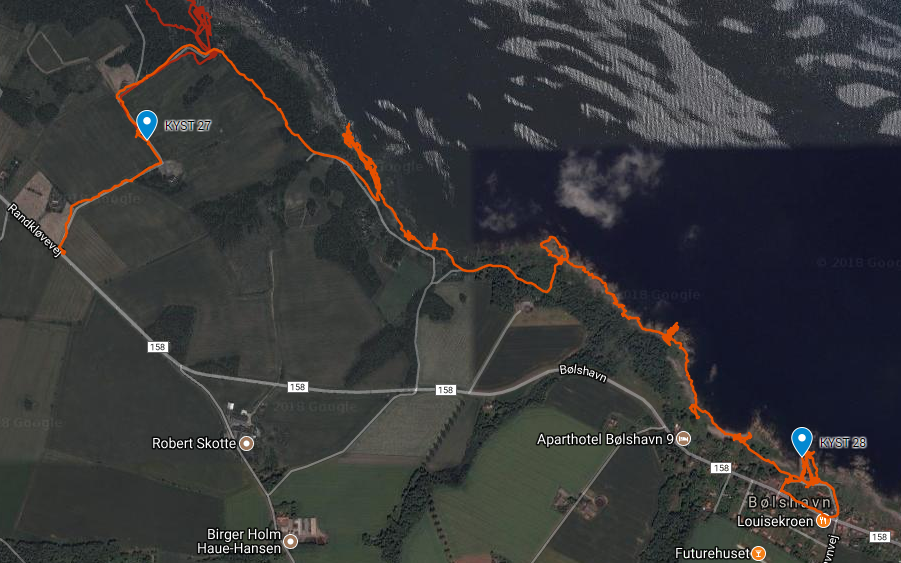