For at læse denne KYST 25 blog på Dansk, se her…

KYST 25 It was so early when I woke that the cat didn’t even bother begging for food. I had returned from London late the previous evening and was, yet again, exhausted and underslept. At the start point by the Kobbe stream I had an appointment with Stefan from the local TV station, who wanted to make a short piece on the project. It was windy and even a little chilly, but we were both treated to a spectacular sunrise. 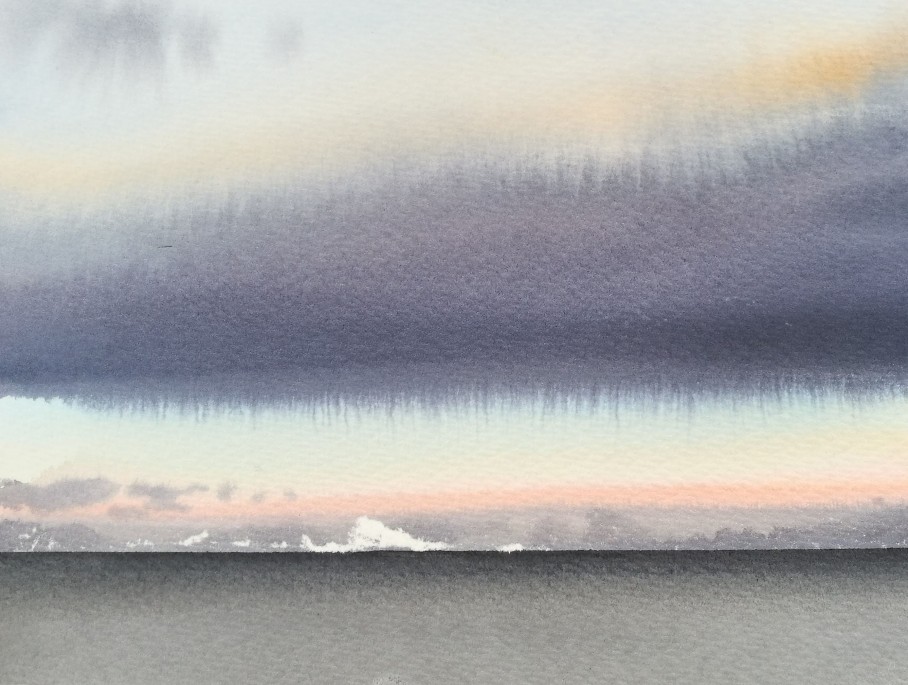 I was barely able to string a sentence together, and sat under the M60 brolly, sheltered from the wind. I embarked on a slice painting, recording the brief shower, the retreating clouds and the emergence of fine weather. By the time I had finished, the day was warm and I was suffocating under far too many layers. Steffan had left and I wandered onwards along the rocky shore.

This was a section of the coast I had never seen before. The going was extremely rough with savage crags and outcrops of gneiss bedrock separated by narrow coastal meadows with tussocks of grass and sedge and the occasional stony beach. The coastal path, as it is, was up by the main road, and I decided to keep to the shore as much as possible. Exhausted with the effort of hauling all my gear I took a break for a while, where I painted the meadow.

Walking on, I came to Himmerigsport, a small rocky promontory filled with deep fissures, clefts and cracks, and dried up rock pools. The bedrock was streaked with pinkish veins of pegmatite, a crystalline igneous rock that was formed during the final stages of the magma’s crystalisation. As they are coarse-grained, they are eroded more quickly than the surrounding gneiss bedrock by the action of the waves and wind, forming many of the cracks and fissures. I painted one rock face, lit hard and high by the mid-day and midsummer sun.

In Canterbury just 24 hours previously, I had given a talk about Land Art workshops for people with long term conditions, and I felt inspired to make some pebble towers: always relaxing and rewarding. 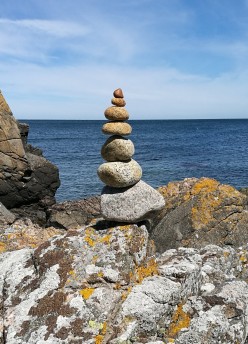 I stumbled on, cursing all my gear, over the craggy coast and through meadows pot-holed with invisible gullies and holes. Truly, this part of the coast is little known and seen. Though just one hundred metres from the coastal road, I didn’t see a single soul all day and I felt pleasantly marooned from the rest of Bornholm, and indeed the world.

Somehow the day was running out and I was only half way. I walked onwards, stopping by a meadow with access from the main road, to record some of the floral diversity I had been keeping an eye out for during the day. There were so many other new flowers that I hadn’t seen the previous week.

Eventually I arrived at my destination – a small semicircular bay with a narrow stony beach where the tiny Kelse steam empties into the sea. The rain from the day before, the first in months, had had little impact and the stream was nothing more than a trickle, disappearing into the pebbles before reaching the sea. This bay actually marks the site of a large vein of dolorite, a valley reaching all the way into the centre of Bornholm, where it is known as Ekkodalen. On this, the longest day of the year, it seemed fitting that I should arrive at midsommer on the arm of a huge valley pointing all the way to the centre of the island like a giant clock hand. I made a stone tower, and painted the light and sky changing as the day faded – a huge rainstorm emptying into the sea, before finer weather returned just as the sun set – nearly 18 hours after it had risen so spectacularly in the early morning (see top).

Weather report = Cloudy to start off with, with a very small rain shower. Sunny periods for the rest of the day. Temperature between 11 °C in the early morning and evening and 18 °C in the afternoon. Wind between 11 and 7 m/s from the west (though I was sheltered most of the day). Visibility: fantastic. Hours of sunshine: 10 hours.

Lessons learned – I think I was too tired to learn anything. Oh yes = don’t lose the edge of the magic tape, you’ll never find it again.

Other stuff = waders on return – the mournful wail of a curlew flying overhead, together with green sandpiper flushed from a coastal meadow, in some ways heralded the onset of autumn and the change in the flow of the year.

In my head – The previous 24 hours had been hectic. My mind raced with the garbled intensity of my impressions from a lightning trip to Canterbury and England.