For at læse denne KYST 15 blog på Dansk, se her…

KYST 15 Disturbed at my arrival, a group of eiders silently abandoned the shelter of the rocky shore and launched themselves into the boiling surf. A blood-red sun began its meteoric rise through the day while the foaming sea crashed and tumbled over and into the granite outcrops. Alone and awestruck I began the day’s first painting in the teeth of the cold onshore wind.

After a while the sun was covered by some clouds and I carried on, past the school and into a small park-like area. Here I wandered around listlessly, eventually settling down and looking southeast to the distant smoke house chimneys of Allinge.

I walked on a little and turned and looked northeast where I had just been, with the returning sun now behind me, and tried to capture the energy of the waves rolling in.

Frustration started creeping in and I was tired and underslept. The constant roar of the waves and the buffeting wind I found irritating rather than invigorating, so I took a detour away from the shore to Madsebakke, a nearby archeological site where Bronze Age Bornholmians had carved symbols and pictograms into the smooth granite outcrops. Despite – or perhaps because of – being painted red, the pictograms were slightly underwhelming, and it took me a while to connect to the significance of the site.

Eventually I returned to the coast, where a flock of eiders frolicking on the waves brought me back into familiar territory and brightened my mood somewhat. 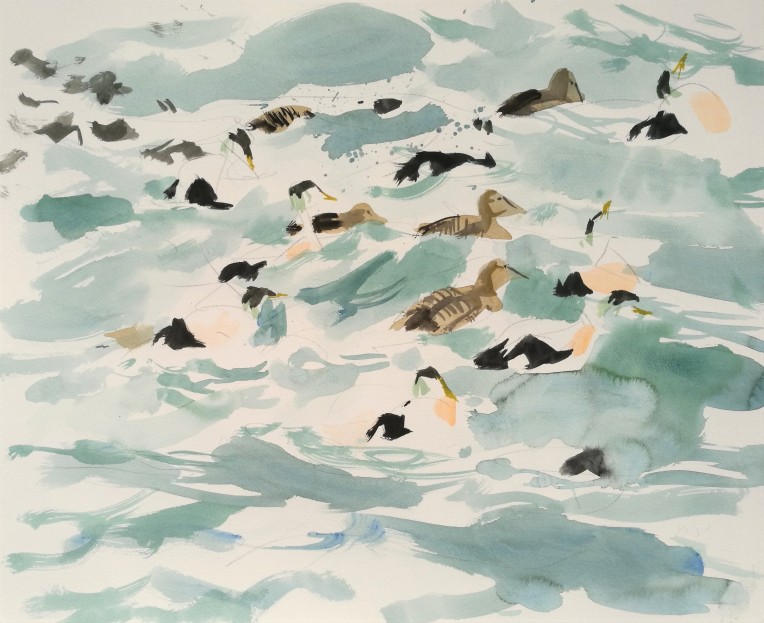 I continued to the small harbor at Møllerende, where I visited some friends and enjoyed a wonderful coffee and home-made bread in their garden. Refreshed I returned to the harbor where I spent some time observing a nearby rookery. There was a bit of nest swapping but otherwise they were quite subdued. In the shelter of the M60 I felt drowsy and warm, and – for the very first time since KYST began 15 weeks ago – I took my gloves off.

Here I also made a sketch of ‘Domen’ the new building that is the focus of ‘Folkemødet’ – Bornholm’s political festival and one of the island’s biggest events. It was difficult to imagine that this area would be heaving with thousands of tourists in just a couple of months. 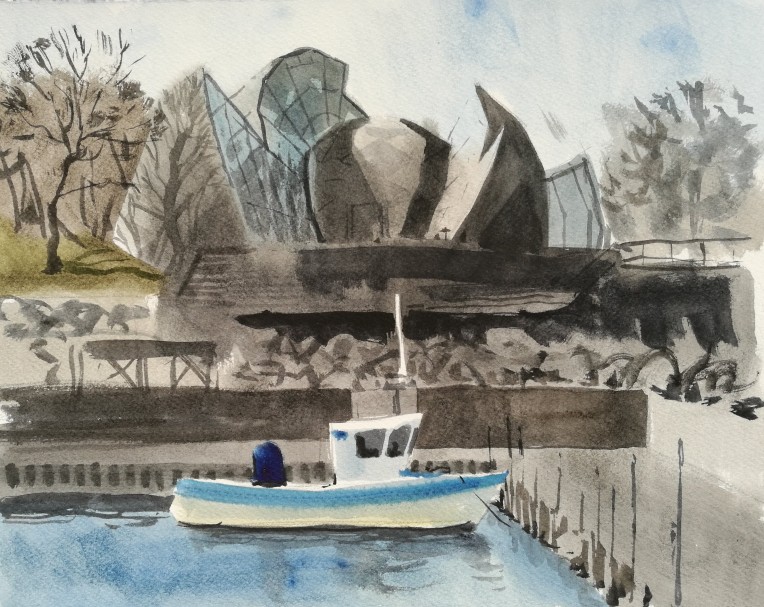 I walked on, past the harbor at Allinge, and onwards to the grassy area at Kærenæs, where I watched a huge flock of long tailed ducks and common scooters tumbling in the huge waves. Onwards I trudged to the next bay, just south of Gulehage, where I eventually managed to find shelter from the wind behind my M60 brolly on a grassy area just in front of the beach.

I sat down for a late lunch and got talking to a friendly local gentleman who soon popped back to his house to grab a bottle of schnapps. Wonderfully fortified and refreshed, I started to draw a pair of shelducks who were resting in the distance, their rusty coppers and greens harmonizing wonderfully with the backdrop of lichen covered rocks and ultramarine rock pools. As so often happens, however, my eye through the telescope seemed to disturb them, and they soon disappeared.

I walked onwards past the small sandy beach to my destination Knudsnæs, another rocky outcrop with fine views in all directions. I was exhausted now, but decided to walk around and explore for a while rather than sit still. The wind had abated a little, but the sun had disappeared and it was getting cold. The huge waves continued to crash into the shore and the common gulls yelped and screamed. White wagtails flitted around amongst the rock pools. Though it felt like a spring day, there was still only a little growth and the birdlife and birdsong was still rather stilted.

I found a sheltered spot and painted the rocks and the view to the north in ‘strips’ every half an hour or so, as the day slowly fell away and the sky darkened to a deep violet blue.

Weather report = A little light rain in the early evening. Sunny or hazy for most of the day. Temperature between 6 and 9 °C. Wind between 9 and 13 m/s from the east. Visibility: hazy. Hours of sunshine: 10 hours.

Lessons learned – do not drink tea just before you go to bed. Get some new paintbrushes. Maybe time to ditch the thermals?

Other stuff = I watched a cormorant swimming in some huge waves just off shore. As the waves built up in size, one after the other, he decided it was all getting a bit much. He turned and swam into a huge 3 or 4 metre wave and, just as it was about to break, he opened his wings and the momentum of the wave tossed him up like a rocket. Amazing.