For at læse denne KYST 13 blog på dansk, se her 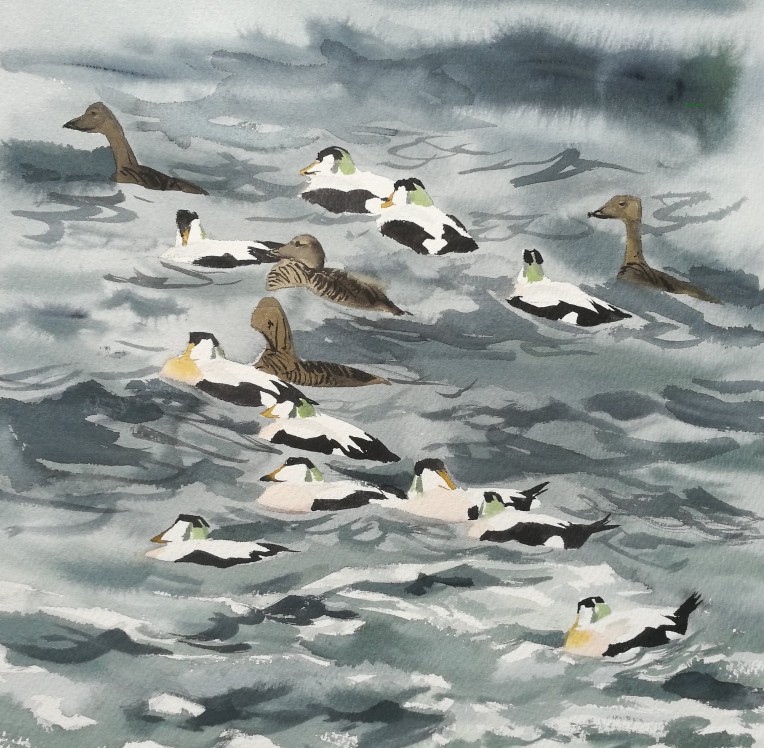 KYST 13 Whilst the rest of Bornholm was still blanketed in snow, I was surprised – and a little disappointed – to find out there were just remnants left on the Hammer peninsula. According to the weather forecast, the day promised sun and no wind in the afternoon, but when I finally made it to the start point at Salomons Kapel just as the day began, it was overcast and the onshore wind was howling with huge waves crashing on to the rocky shore. It was too windy to put up the M60 in the exposed spot where I had finished last week, so I hunkered down and made a quick sketch before moving on in search of shelter. 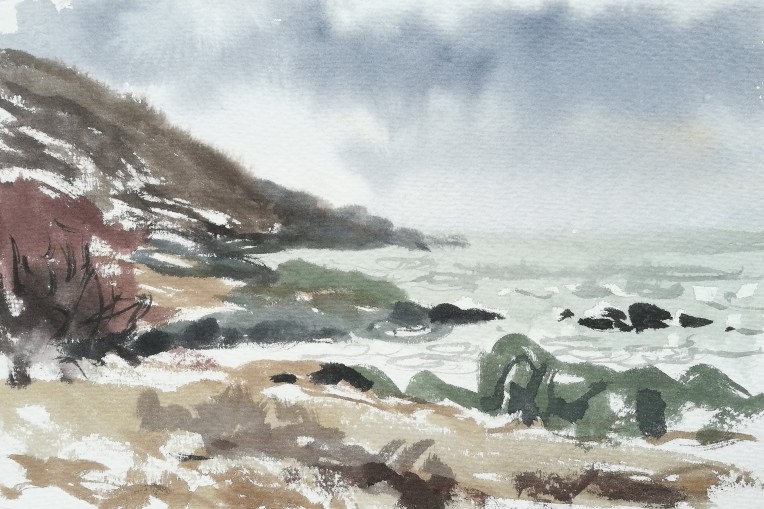 Close by I found a spot beside a rocky outcrop where I could put up the M60 and draw an incredible series of windswept whitebeam trees. As always, my mood, the day’s weather and the environment conspired to dictate my choice of motif. No birds sang, it was hard to believe that is was Easter Friday. 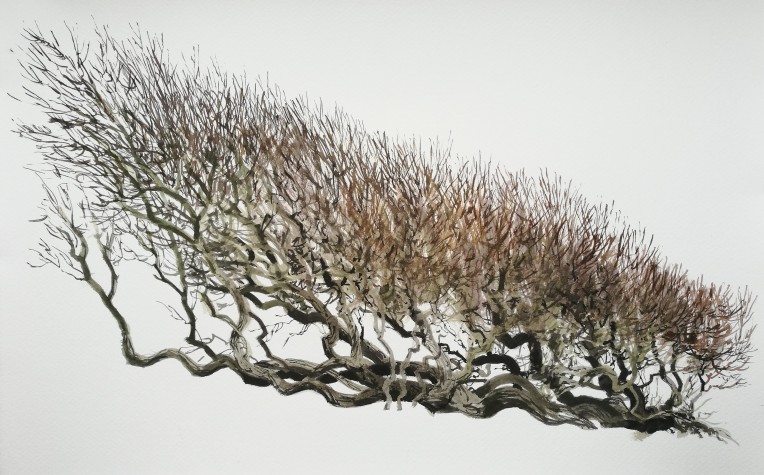 I packed up and continued northeast to a more sheltered beach, just before the lighthouse. In recent years a tradition has sprung up here – a wonderful and spontaneous collective land-art project whereby passers-by have started creating stone towers. Passing tourists add their own and by summertime the whole area can be covered in hundreds of them – only for them to quietly fall and disappear during the autumn and winter storms. There were none to be seen, so I got the season off to a good start. 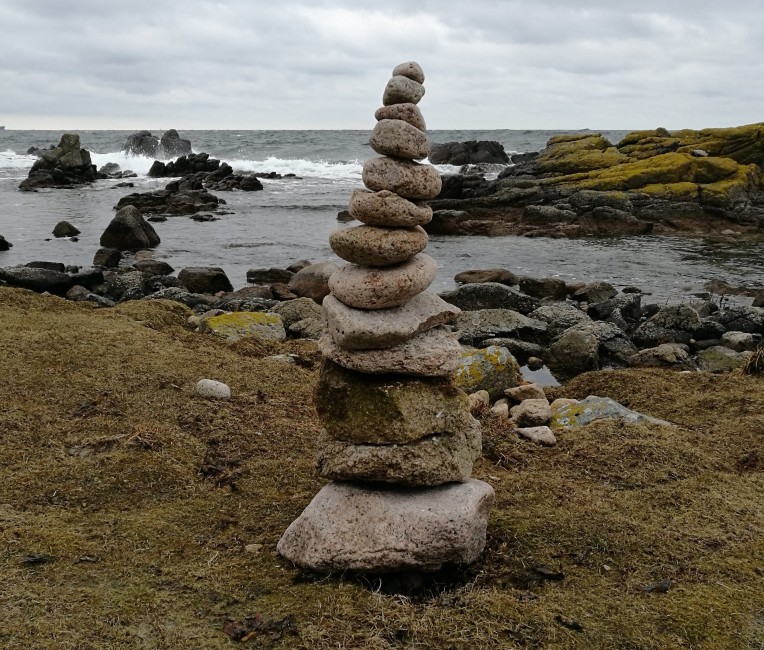 Warmed up from my exertions I sat and looked at the wonderful rock formations with the waves crashing in. 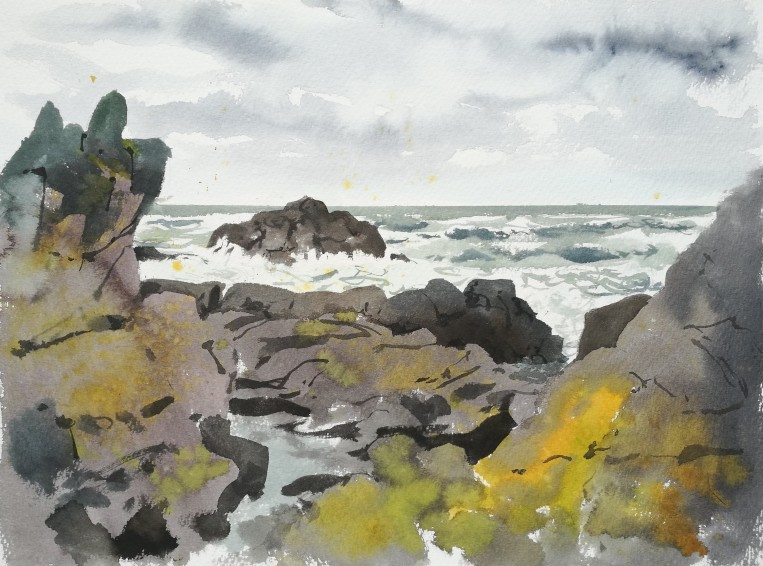 After an early lunch in the small sheltered pine wood nearby I carried on to the lighthouse – Bornholm’s northernmost point. I sat as far out as I could and painted the waves pounding the lichen covered granite rocks. From now on, and for the next 18 weeks, I would be heading in a southeastern direction. 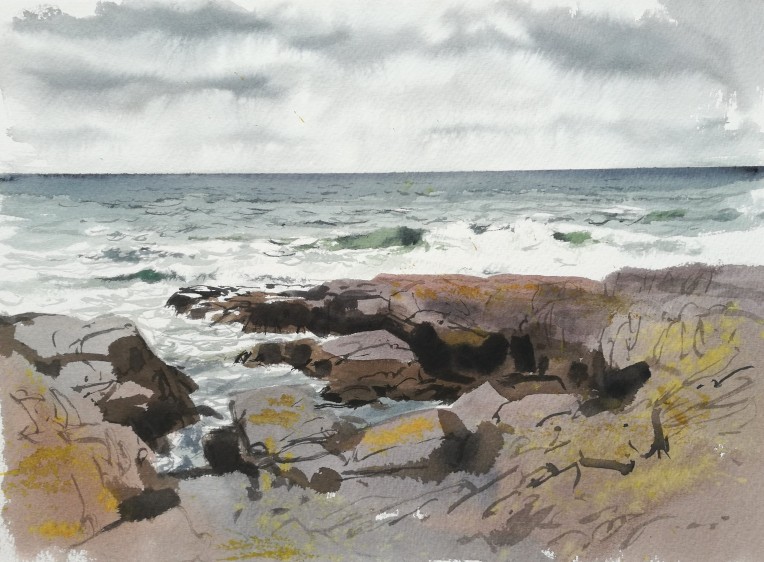 I kept on the rocks below the coastal path, and clambered around trying to find shelter. The wind had abated only a little and the sun had shone for 15 minutes or so before disappearing again. The pink granite formations flecked with all sorts of lichen were incredibly complex and striking. Below the cliffs away from the shore there were several pools and springs, the whole area a universe in itself. In spring and summer the Hammer peninsula attracts botanists, but all was brown and dead and there were few signs of spring. In one pool, however, I did find rafts of frogspawn – my first of the year. 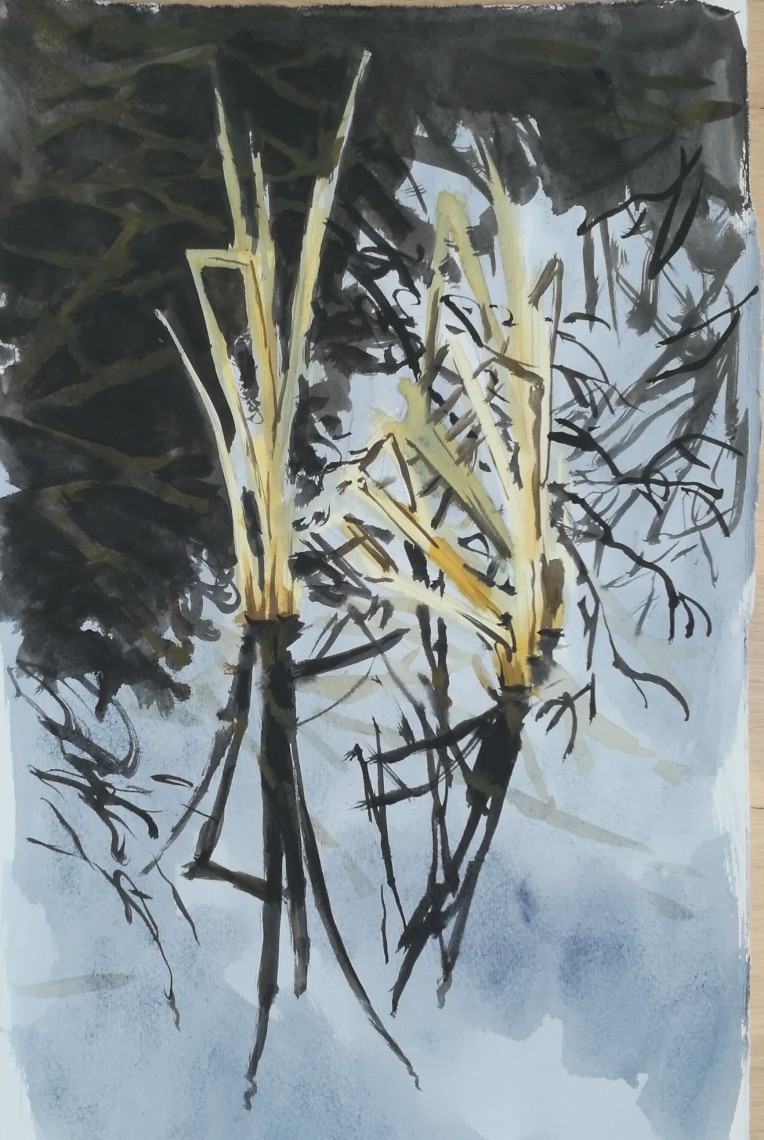 I walked around enjoying my solitude. I studied rocks and waves. I felt far from everyone and everything, despite the steady stream of walkers on the coastal path above. 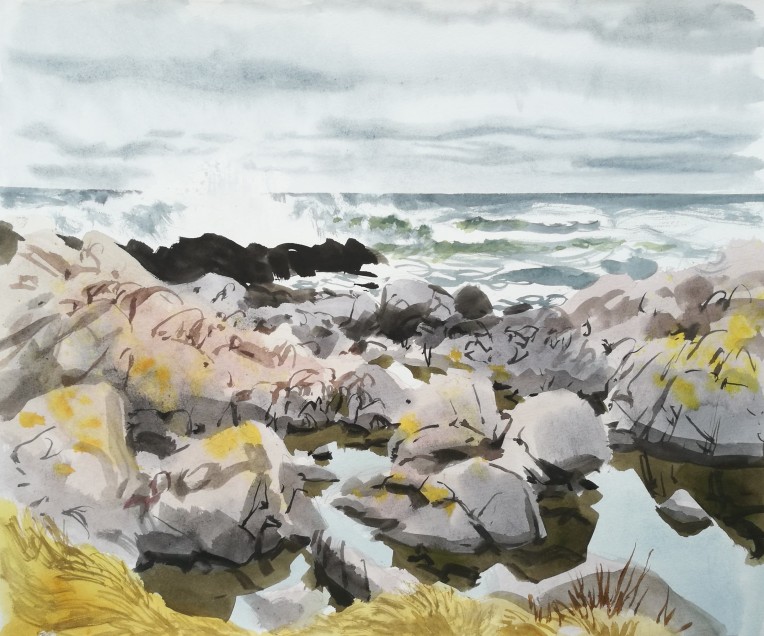 Eventually I found a good spot looking south to Sandvig strand, where I set up my telescope and watched a distant group of eiders rocking in the surf (also see top). 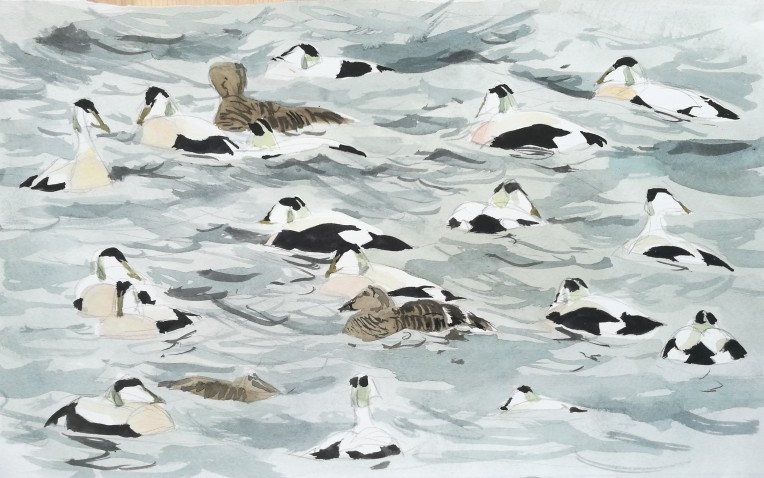 The day felt long and when I finally packed up and moved to my destination point close to where I had left the car 12 and a half hours earlier, I was exhausted. I looked across the bay. In the far distance the town of Gudhjem could be seen as a blue stripe. A small bird caught my attention – a fine male stonechat, a handsome and unusual bird in these parts. It felt like my reward for the day.

Weather report = No precipitation. Overcast with a short period of sunny intervals. Temperature between zero and 3 degrees. Wind between 3 and 9 m/s first from the north and later north east. Visibility: good. Hours of sunshine: maybe 30 minutes, if squeezed altogether?

Lessons learned – While Danes generally ‘keep back’, Germans are more like English people in that they have no qualms approaching you when you are painting. Twice I got huge shocks from some sweet German tourists whilst I was away with the fairies.

Other stuff = I am sort of sad to leave Bornholm’s west coast – driving back I noticed the remnants of a fantastic sunset, which I had completely missed where I was.

In my head = ’God’s Plan’ awful Drake song that my girls listen to. The video is horrific. Need to move up to studio and sleep there Thursday nights. Underslept, noisy teenagers coming home from parties. 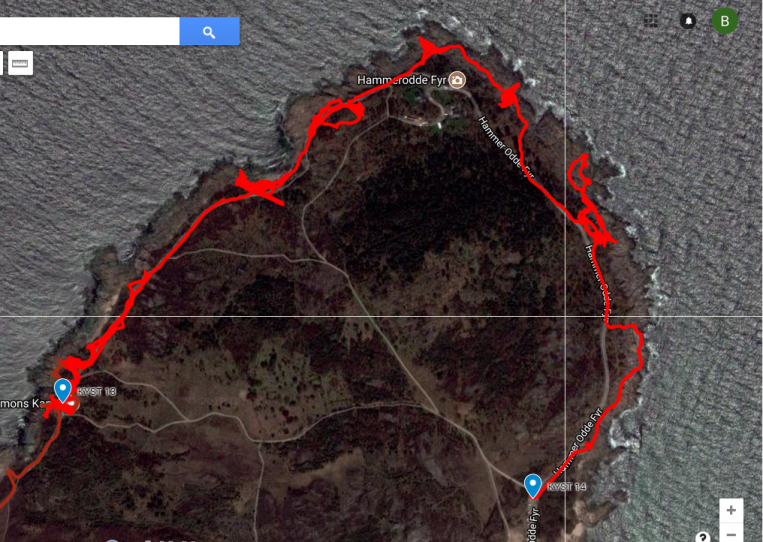