For at læse denne KYST 09 blog på DANSK se her 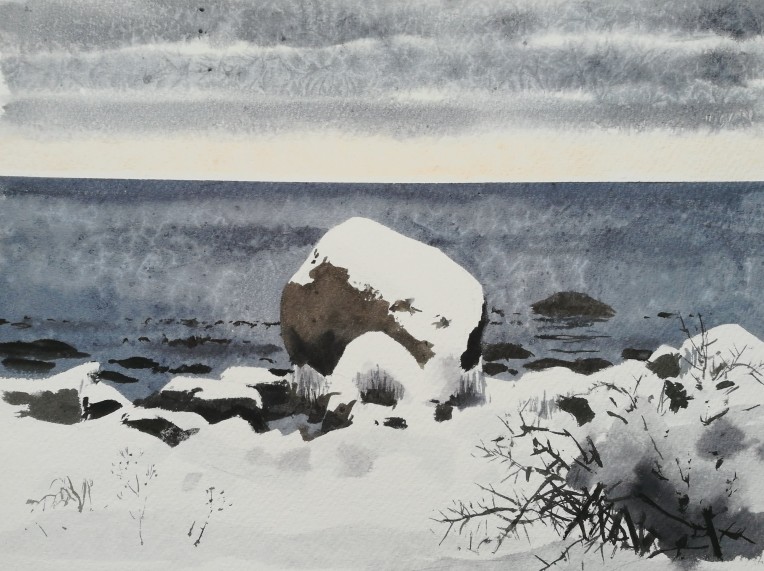 KYST 09 Ever since the weekend, Bornholm had been covered by a thick blanket of snow and battered by a chilling east wind. School buses stopped running and only the main roads were cleared of the constantly drifting snow. After six in the evening, all activity ceased and we were warned not to make any unnecessary journeys. But as I looked out of the window early Friday morning the wind had died down a little, so I decided to go for it. The drive to Vang, which usually takes only 20 minutes or so, took nearly an hour, and I luckily fell in behind a convoy of slow moving cars. The road down to Vang is very steep and I was glad to find somewhere to leave the car by the harbour, and walk back to the start point by Vang pier through the thick virgin snow and morning gloom.

Despite leaving early, due to the long drive I was 10 minutes late for the sunrise just before 7am. It was still snowing hard, so I cleared a space and set up my M60. Despite being sheltered from the wind, the snow still swirled under the brolly and onto my paper. Four whooper swans sheltered in the sea under the cliffs, flanked by a rather confused and aloof mute swan.

It was minus seven out of the wind, but I was well prepared with seven layers of clothing, a hot water bottle and a thermos flask. I had also left extra provisions and firewood in the car. I painted with nearly boiling water, with my palette resting on the hot water bottle. This way I could mix paint and apply paint to the paper, where it froze almost immediately. I made many experiments and studies of the pigments freezing, letting the snow fall on the wet paint, or even burying the painting in the snow.

Here you can actually see how the outline of some of the snowflakes have been ‘captured’ by the pigment and frozen in the millisecond before being destroyed. I don’t really understand the physics, but it was incredible to see. 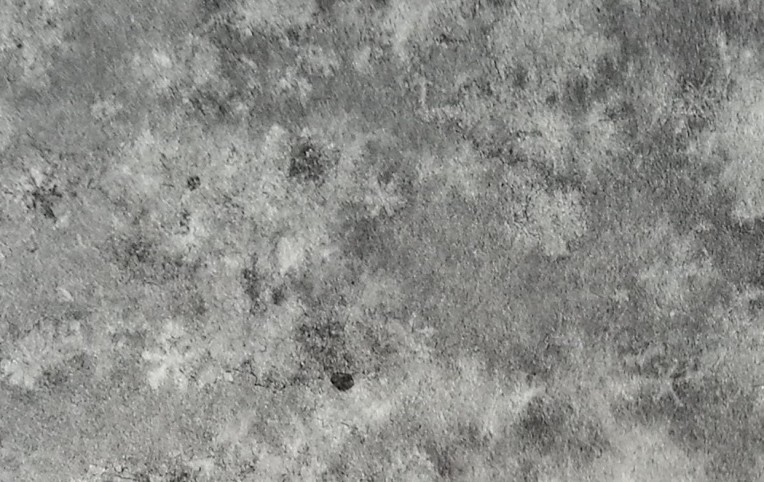 I packed up and trudged through the snow back towards Vang. In the shelter of the granite cliffs I cleared a circle of snow with my shovel and set up the M60 again. Here I tried to depict the wonderful wintry scenes around me.

At one point the sun briefly came out, and with direct sunlight on the paper I was able to avoid the paints freezing. 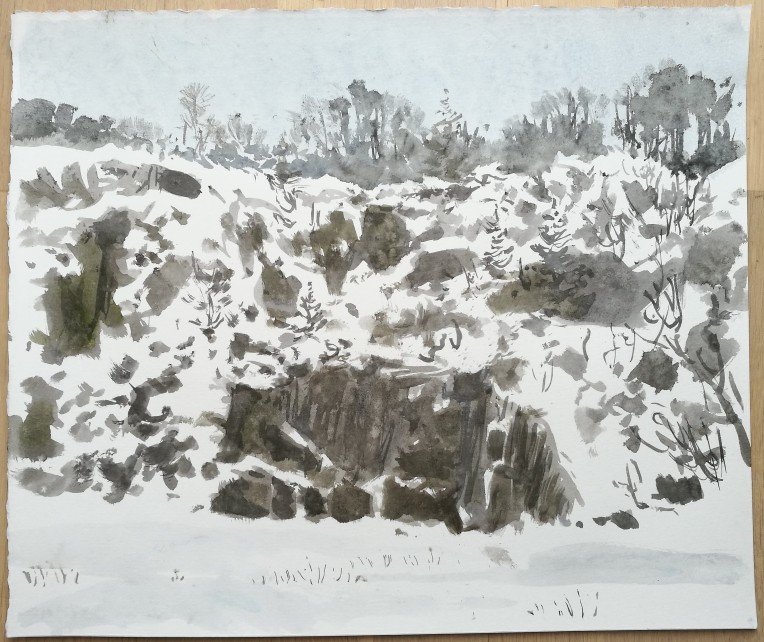 After a wonderful pot noodle and a warming coffee, I walked back to Vang harbor. I still had not seen a soul. Every now and then the sun would break through the clouds. The old fishing hamlet of Vang looked incredibly picturesque covered in snow. 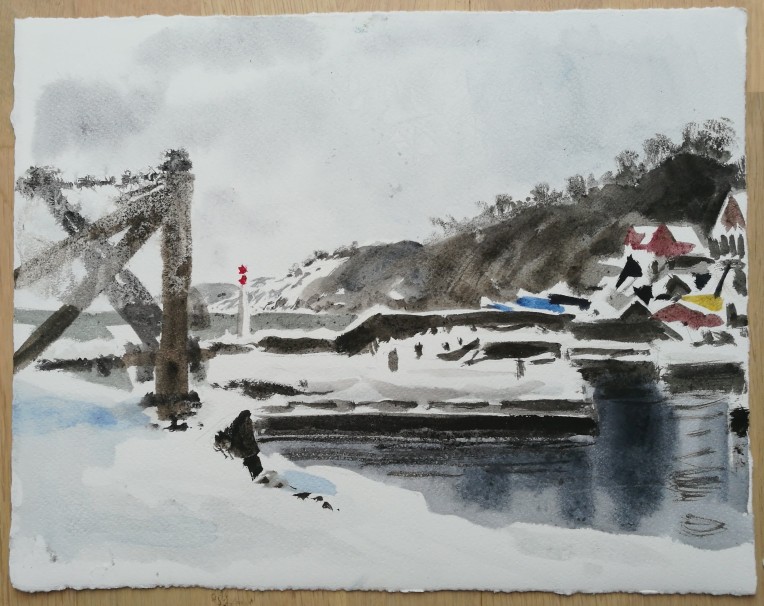 A very kind couple I know invited me back to their summerhouse for a warming coffee. By this time my toes were frozen and I was glad for the opportunity to warm up, though it did feel a little wrong. Their house, an incredible old fisherman’s cottage that at one time had housed two families, was situated just outside Vang only metres from the shore. We talked about Vang, and how hard it must have been for the families back then, in crowded uninsulated and unheated houses, with little to look forward to other than another day on the freezing sea or slaving away at the quarry face. The fishermen have gone now and the quarry is closed, though Vang somehow retains its sense of community.

Soon I was burning up in all my clothes and I got back outside. The path along the shore was hidden in the thick snow. In the small wood skirting the base of the cliffs a roe deer bounded away before pausing and looking back at me. A flurry of feathers and blood on the snow marked the point where a sparrowhawk (or goshawk?) had surprised a woodcock. I could see where the hawk’s wing tips had brushed the snow as it swooped down. I imagined the chase and kill in the snowy silence. Further on I paused by some snow and ice covered boulders. The prospect was bleak but stunning in its clarity. (See top)

I walked back and forth along the path; partly looking for inspiration, partly looking to warm up. At my journey’s destination, Pissebækken (‘Piss Stream’) I sat down in the wood and looked up to the frozen waterfall. Under the ice I could still hear a trickle of water cascading down the granite cliffs. It was so cold now that the paint almost crackled on the paper as it froze. As the sun set behind the snow clouds at 5:29pm I walked back along the path, completely exhausted, to my waiting car. 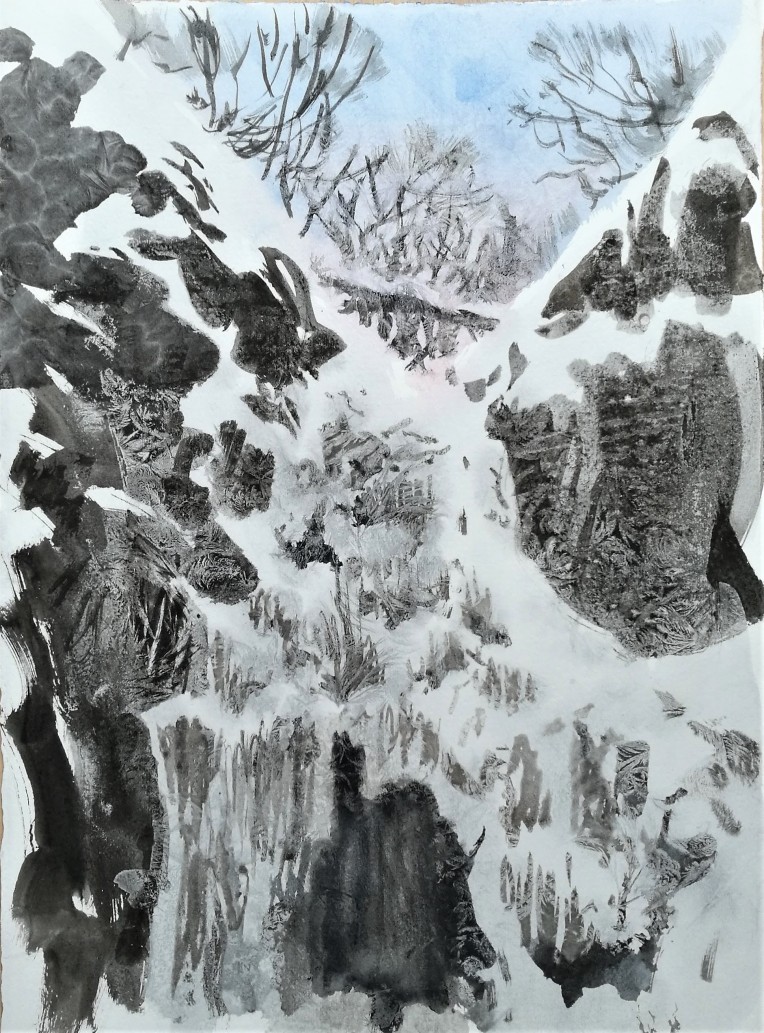 Weather report = heavy snow in the morning, light snow in the afternoon. Overcast with some brief sunny spells in the morning. Temperature between minus 7 and minus 4 all day. Wind between 1 and 6 m/s first from the north, then the east. Visibility: bad. Hours of sunshine: 30 mins?

Lessons learned – hot water bottle and hot water a good way of painting in sub-zero temps – glycerin too wet and alcohol too damaging to paints and brushes. Need new boots.

Other stuff = hare in field, do more woodcocks get taken in the snow? Why are there so many blackbirds by the coast?

In my head = keeping warm… too cold for telescope, no bird drawings in two weeks… Amazing Andy Goldsworthy exhibition in Lund. 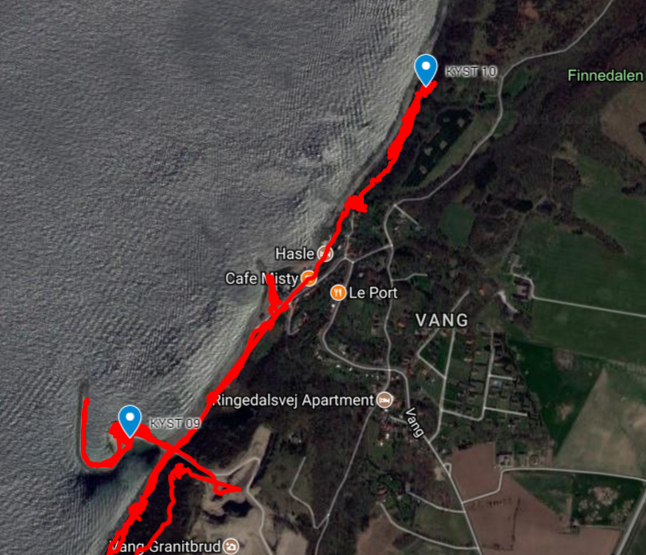