For at læse denne KYST 06 blog på DANSK se her 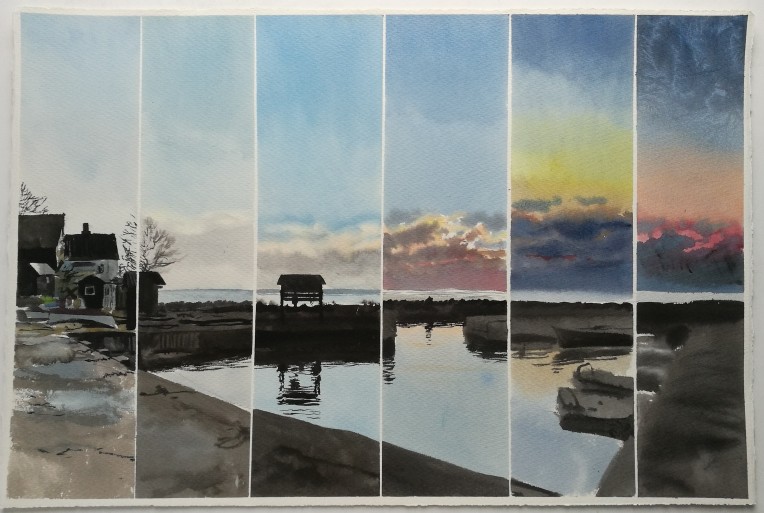 KYST 06 As I settled down and unpacked my bag at last week’s end-point, I looked above the silhouette of Hasle’s marina up to a deep blue and completely cloud free sky. For the first time since this project began I could look forward to some sunshine. It was bitterly cold but crystal clear, and a deep frost had covered everything in white fuzz. There was almost no wind.

I left the marina and headed north – not on the coastal path which deviates here from the coastline, but on the rough and barren beach itself. The gentle sandy shore of the last few weeks was now replaced with granite pebbles and rocks.  After a while I stopped and set up the brolly, and experimented a little – creating ice washes and adjusting the temperature of the water, and even adding a little gin that I had bought with me.  The ice and pigment combined to make incredible but very subtle patterns.

The beach was covered in pebbles with some larger erratic boulders, bordered by layers of sandstone and clay finely marked with black veins of coal. I made studies of some far off gulls and cormorants, but fought against the ice on the paper and my freezing feet. As often happens, the discomfort I experienced translated into expressive and animated brush strokes – reflecting the moment in an honest and authentic way. Again the ice created incredible textures on the paper. 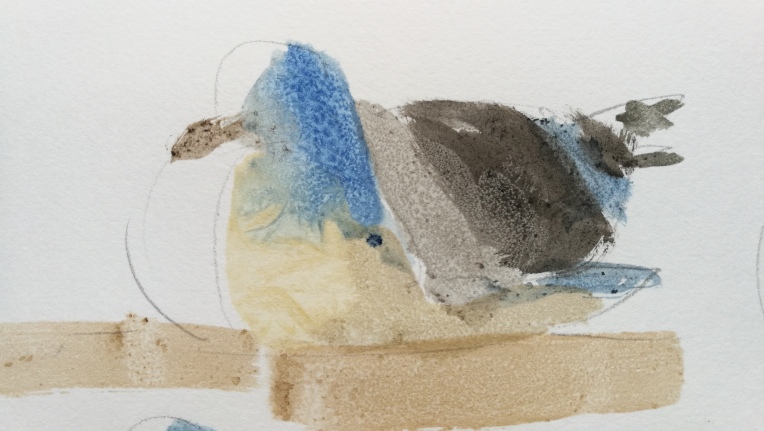 I packed up and ambled onwards, slipping on the ice-covered granite pebbles and boulders, deposited by retreating glaciers. This part of the coast bears witness to the time when Bornholm was released from the grip of the Ice age, and just inland is a terrace and slope which is actually a coastal cliff from 10,000 years ago. This afforded me some protection now from the freezing south easterly wind, which was picking up a little, and I looked back towards the rising sun and Hasle, and a fanstastic ivy-covered tree. 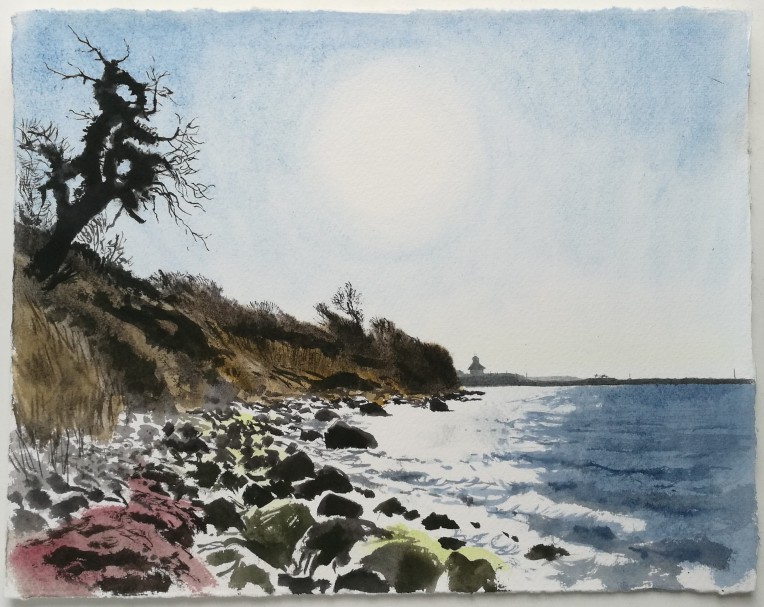 Continuing northwards, I sat in the warming sun and spent far too long painting an old and twisted hawthorn bush. There were very few birds around and no people at all.

I could see the white chimneys of old smokehouses in the distance. Here the path rejoined the coastline, and I was glad to get off the pebbles for a while and follow the road to Hellipeder, my destination. At Hellipeder I settled down and prepared for the fantastic sunset that I knew I was imminent. The small but very picturesque harbor is no longer used for commercial fishing, but is today managed and maintained by a group of volunteers. Again my thoughts drifted back to the recent past, only 60 or 70 years ago, when this harbor would have housed and protected a close-knit community of fisherman and their families.

I painted in strips, every twenty minutes or so, and followed the sun as it disappeared behind some clouds, only to reappear momentarily blood red. I struggled with the colours and the pace of change, but just as the sun finally dipped below the horizon the paint started freezing again, creating some amazing crystal patters on the deepening blue sky (see painting at top)

Weather report = Sunny with some cloudy spells,  minus 3 to 1 °C, Wind 3 to 7 m/s from south and southeast. Visibility: Good. Hours of sunshine: 8

Lessons learned – you need to mix large quantities of gin into water to stop it freezing. Neat alchohol must be better and cheaper.

Other stuff = a sparrowhawk flashed by. What an amazing bird.

In my head = whether I can escape the illness currently afflicting most of my family and half of Bornholm, the Jordan Peterson interview on transgender politics, being strong and resiliant, social change, how best to protect and help people I love