For at læse denne KYST 04 blog på DANSK se her

KYST 04 Driving to the coast through thick fog, I was nevertheless excited and eager to see what the day would bring. Incredibly, the sea was calm yet again, and there was very little wind. Bands of thick fog rolled in with visibility sometimes down to a few hundred metres, while at some moments the horizon could be suddenly be seen.

I trudged north. This part of the coast seems quite deserted and there were very few people about. A fisherman, a couple of kayakers and not much else. The sandy shore of the previous two weeks was starting to give way to boulders, pebbles and shingle.

Eventually I reached ‘Kultippan’, an incredible lunar landscape of mud and clay, jutting out from the coastline. The mud and clay had been deposited here during the 1940s, as a waste product from a nearby open coal mine that is now a small lake. This short-lived enterprise at one time employed 60 people but closed after just a few years as it was not economically viable.

The resulting landscape is like nothing else on Bornholm. The thick fog together with the lack of vegetation created an apocalyptic mood. Perhaps this in turn influenced my own mood, but I struggled with the landscape, the fog coming and going, and the thick clay getting everywhere. 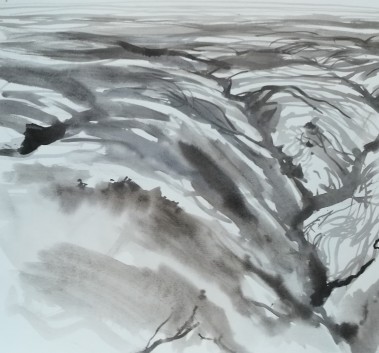 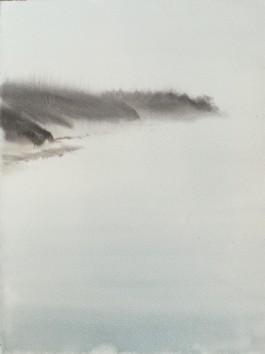 Some passers-by explained how, when they were children, the mud mountain had still been flat and they had even skied and tobogganed here in the winter. Now, the mud was carved with innumerable valleys, rivers and rivulets, decades of rain water having left their tracks. Exasperated, I decided to forget about observing in the literal sense and tried something else. I played with the paint, trying to recreate the journey of water through the clay and mud, with the paints on the paper.

I watched some birds on the calm sea from my high vantage point. A solitary velvet scooter (the black one) was seemingly trying to ‘fit in’ with some long tailed ducks, near a group of great created grebes. They all shunned him.

Eventually I carried on northwards to my destination ‘Klympen. I sat on the beach as dusk fell. There was no wind and there were no people. Though obscured by the fog, I could hear the ducks calling to each other far out at sea. Just as I packed up, thousands of chacking and chawing rooks and jackdaws suddenly wheeled and swirled over me, before disappearing into the murky blue emptiness, on their way to roost in the nearby forest.

Lessons learned – Don’t have to throw toys out of the pram when things go wrong, have all day to do stuff. Take a break from looking every now and then.

Other stuff = disturbed heron flying into fog over sea, panicked and turn back. Funny