‘Brud i Gennem’ (badly translated as ‘Breaking Through’) is the name of an anamorphic installation I did at Galleri Rasch in Rønne, Bornholm in the end of September 2016.

Nothing to do with birds (though I did actually hide a peregrine in one of the paintings) the exhibition is concerned with the way in which we (=I) struggle to deal with the ‘viral’ images of dead and injured children that are pumped out of Syria into the wider media on a regular basis. In a broader sense, the exhibition addresses the issues surrounding the Syrian Humanitarian Crisis and the influx of refugees into Europe (and even little Bornholm).

The main premise is this: I live in an incredibly safe war-free zone, surrounded by wonderful nature far from the dangers of bombardment and starvation , or the need to flee for my life. I take a walk  in the daytime, maybe sketch some birds. In the evening on one or other screen (or , more probably, several) I am served images of dead or dying children – ‘viral’ images that awaken the conscience, tug on the heart-strings and cause pangs of guilt – until they are swiftly forgotten and life moves on…  Until that is, the next time I sit in a bus with some confused Syrian refugees, or my child talks about the new kid in their class ‘Mohamed’. My seaweed drawing on the beach, see here, was part of my response to this situation.

‘Brud i Gennem’ came about when I was invited to have an exhibition during Bornholms Kulturuge (‘Culture Week’) in September 2016, by Galleri Rasch in Rønne Bornholm. The theme for 2016 was ‘Brud’, an interesting word in Danish that has multiple meanings and idiomatic uses. In Spring of this year I did an art week with some students from a school in Nexø that explored some of these themes, and some ideas relating to the refugee crisis and the use of the anamorphic technique began to fly around in my mind.

Being very busy this summer, I didn’t really have time to move things on much. When the images and films of Omran Daqneesh ‘the boy in the ambulance’ surfaced on the News and online, I was shocked and appalled. The helplessness and shock on his face reflected the whole situation in Syria, and I couldn’t get the image off my mind. It is precisely the of the image that makes it so powerful. Omran looks lost, helpless – both young and vulnerable, but somehow ossified and ancient at the same time. War photographers from Syria see worse – children with their limbs and heads blown off – but the image of Omran was somehow shocking enough – without crossing the line into gore. He could have been anyone’s kid. Could have been my kid.

Going for a walk in Vang stenbrud (an old granite quarry here on Bornholm) looking for some recently fledged peregrine falcons a few days later, I was still thinking of the image, or rather, it was still preying on my mind. The deep shadows in the rocks hid a multitude of faces and figures and seemed to echo the statue like-figure of Omran, covered in grey dust, shocked into catanonia. It was then I realised how the anamorphic technique (where an image is seen as three-dimensional from a point in space, rather than a flat plane) would be the perfect vehicle to reflect the way in which the image drifted in and out of my mind.

I started the installation on the monday, and opened on the saturday – all in the incredible heat of an indian summer (the gallery is like a greenhouse). As the week went on, the exhibition began to change into something – what it is now. ‘Break Through’ works as a ‘normal’ exhibition, with pictures hanging on walls. Then there is the anamorphic composite image of Omran seen from a specific point in the gallery. Nearly hidden on the pictures themselves are also quotes taken from news report from the time relating to Omran in particular, and viral images of war in general. Lastly there is a painting where visitors to the gallery are encouraged to write their feelings and thoughts directly, like graffiti on the rocks.

I was helped by my family (Alma painted the amazingly small quotes with a brush), by the Gallery, and by some students from Bornholm Billedskole. The film I made with the help of Verner Kjærsgaard – a local photographer who dropped everything to lend his expertise and equipment free of charge. 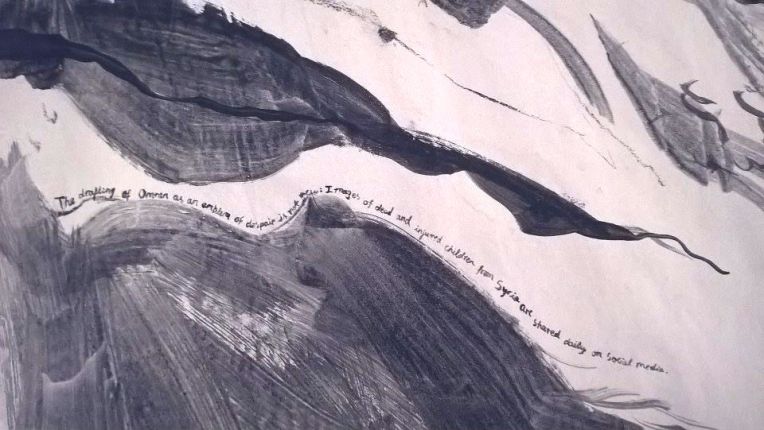 TV2 Bornholm, a local TV station made a short piece about the installation here (20.09.16).

My film of the exhibition is above.