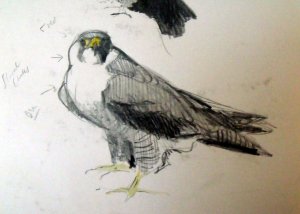 This Spring I’ve been visiting a place called Vang, here on the island of Bornholm. Vang is the site of a large granite quarry, which is still operational today – though in a very limited sense. Peregrines returned to Bornholm early this century, after an absence of 50 years or so, and this year a pair decided to nest on one of the ledges of rock in the Vang Quarry.

Once I found out about this I’ve been visiting regularly and watched the chicks grow from dirty white balls of fluff to fully fledged apex predators. The peregrines were kind enough to nest on a ledge where they were easy to see. In fact, the spot where I sketched them was stable, sheltered from the wind and afforded fantastic views. Perfect.

Actually, I was surprised just by how still the falcons were, once they had fed the chicks, and sometimes hours went by with little or no movement. Not that I would ever criticise a bird for being too still, but sometimes I forgot about the birds and became more interested in the way the shadows moved over the rocks with the passing of the day. 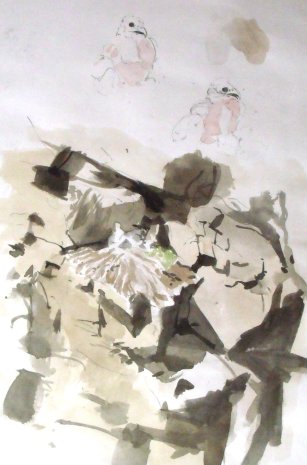 Some of the more finished stuff I did can be seen here.