For at læse denne KYST 42 blog på dansk, se her 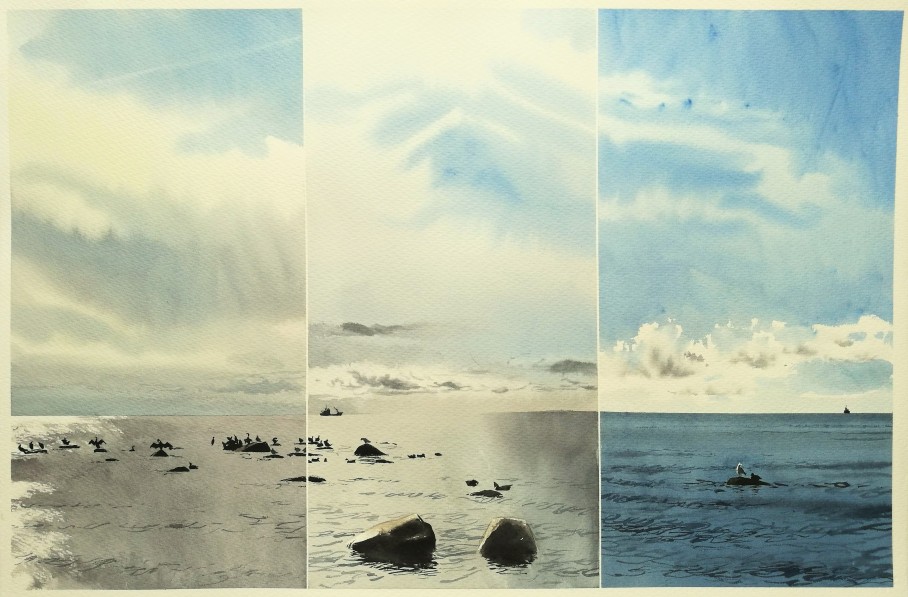 KYST 42 In good time again, I parked my car and walked down to the open heathland area at Slusegaard. On the way down to the coast I paused at the small stone marker that indicates the graticule of 15 degrees longitude east and 55 degrees latitude north. For the first time in many months, my toes and fingers were freezing, despite my wooly hat and gloves. The sky was clear and there was little wind, but the air was humid and I felt chilled to my bones. 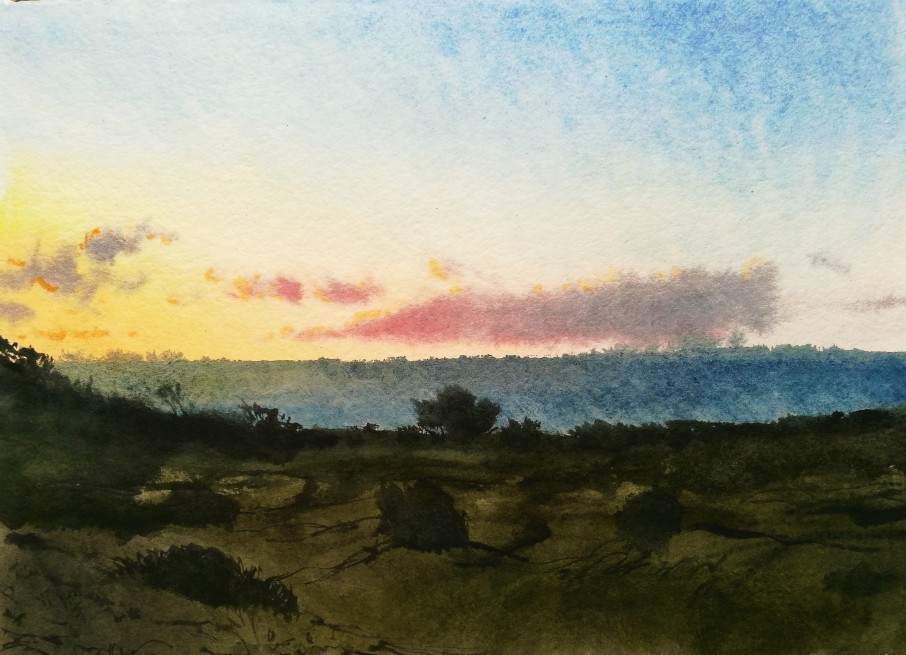 Above, there was an almost constant stream of birds on the move: thrushes, siskins and greenfinches, with sparrowhawks and rough legged buzzards higher up. Eventually I moved down to the beach and basked in the warming sun. I painted the Ole stream emptying out into the sea – the unseasonably warm and dry weather meant that there was little more than a trickle.

On the large erratic boulder close to the shore – the same one that the swans had fought on last week – a cormorant and herring gull sat and preened together. After last week’s pessimism I felt relaxed and positive.

I found the swans again, this time feeding further out, silhouetted by the reflections of the rising sun.

I walked on, to the tiny harbour at Bakkerne, where a collection of small fishing boats rocked gently on their moorings. Just inland, a motley collection of summer houses nestled in the dunes, together with a few more permanent looking houses. Returning to the beach I continued westward and soon arrived at Holster Odde, where scores of coromorants, gulls and mallards perched on the large boulders that lay scattered in the shallow water. The small cape at Holster Odde markes the boundary between the Silurian slate and the younger Cretaceous Rabække formation that continues westward – a jump of some 300 million years. I sat and marked the spot with a slice painting (see top).

Before moving off I painted some studies of a wonderfully lit herring gull.

Now I walked all the way along the straight sandy beach to the Kadeau restaurant, in front of which I had arranged to meet someone. Sitting on the beach with the sun on our faces, it was difficult to believe that November was just a couple of weeks away. Several people swam in the crystal clear waters and I actually regretted not bringing a towel – to think I had been freezing just hours earlier. After some wonderful brownies and coffee, I continued westward, stopping to sketch the cloud formation that had momentarily obscured the sun and caused the temperature to plummet. 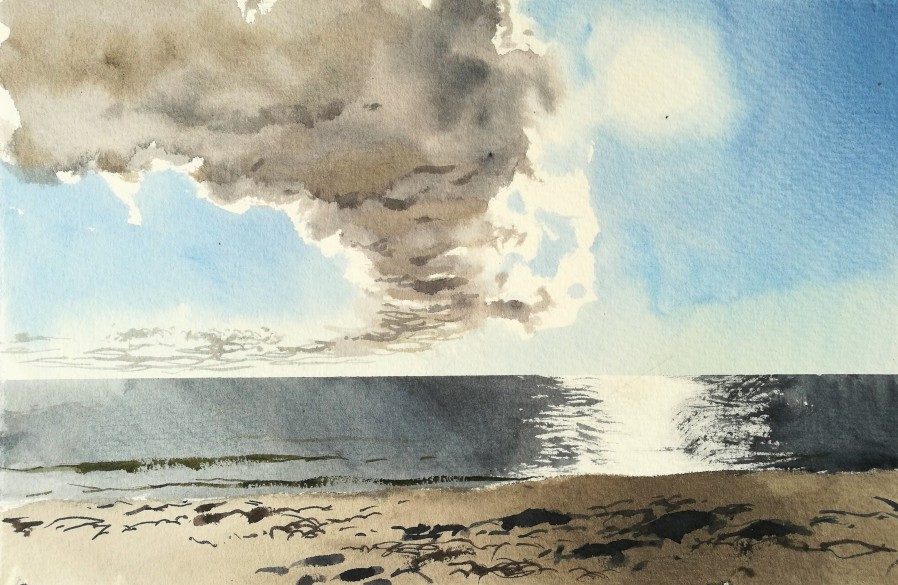 Further on still, my attention was caught by the shapes of the shifting sand in the dunes. Close to the shore, the forces of gravity and wind had created a miniature but ephemeral likeness of the Grand Canyon, not a metre high. Even whilst I sat there and painted small cascades of sand would periodically fall from the cliff face and gather on the slope below, as if time itself was sped up. Geological process that would usually unfold over thousands or even millions of years, were being played out before me, and as my eye soared over the sandy canyons I sensed a giddy feeling of omnipotence, as if I could control time and space.

I reached Gedebække Point with an hour or so until sundown. I wandered around on the dunes before finally settling in front of a small oak tree that was silhouetted against the setting sun, its autumn leaves ablaze. It had been a wonderful day and I walked back along the beach to the waiting car, as the sunset continued behind me.

Weather report = Unbroken sun for most of the day. Temperature between 7°C and 13°C (though it felt much hotter in the sun). Wind between 2 and 3 m/s from the northwest. Hours of sunshine: 9.5 hours.

Lessons learned – I felt as though I was better at not worrying too much about what I was doing and just enjoying the day.

Kilometers walked = 7.00 km (an estimate, as my phone ran out of batteries at Kadeau)

Other stuff = the most fantastic weather on Bornholm, all week. On the beach a steady stream of joggers, dog walkers, fisherman and other people just enjoying the outside.

In my head – The trip to London next week, ‘4321’ a book I’m reading by Paul Auster. The KYST book, applications… 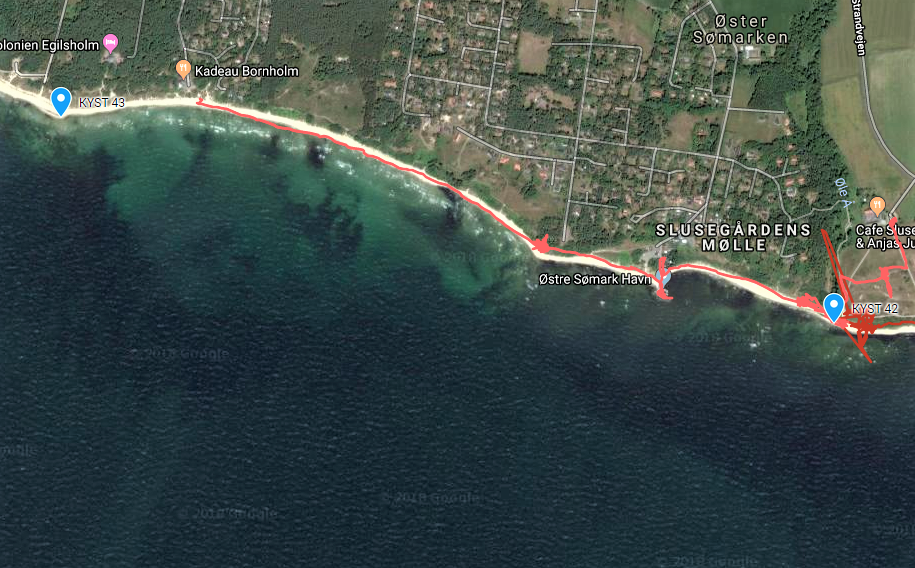