For at læse denne KYST 16 blog på Dansk, se her… 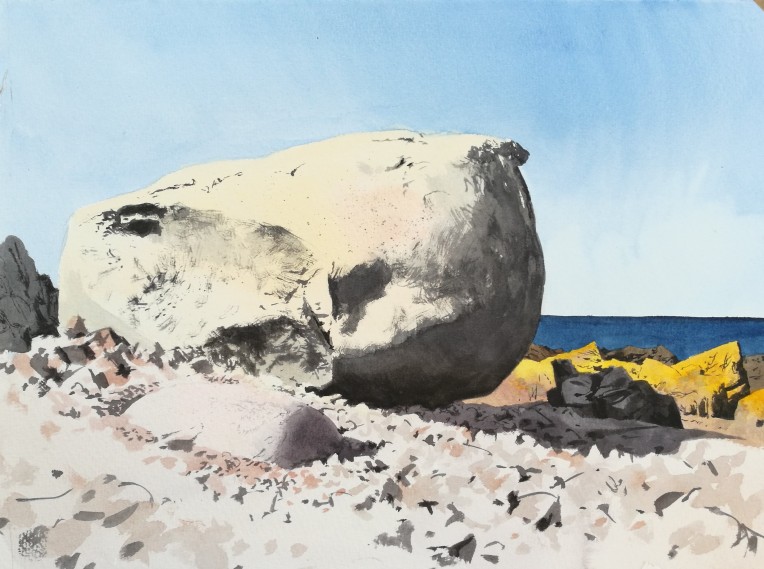 KYST 16 A little delayed, Tina and I drove north, leaving behind the thick fog that covered the southern half of the island. As we crested the hill and continued down to Allinge, with the sea to our right, we could see a crimson sun had already broken through the horizon, its reflection mirrored in the dead calm sea. I quickly unpacked my things, annoyed at arriving so late, and got to work.  The lilting trill of willow warblers, newly arrived from the south, carried across the bay to the rocky outcrop where I sat and painted. Over the bay by the smokery, I could see a group of bathers take a short dip in the water. The sun rose, the bird chorus slowly abated, some joggers ambled by and I drank it all in, blessed to be able to witness the awakening day. 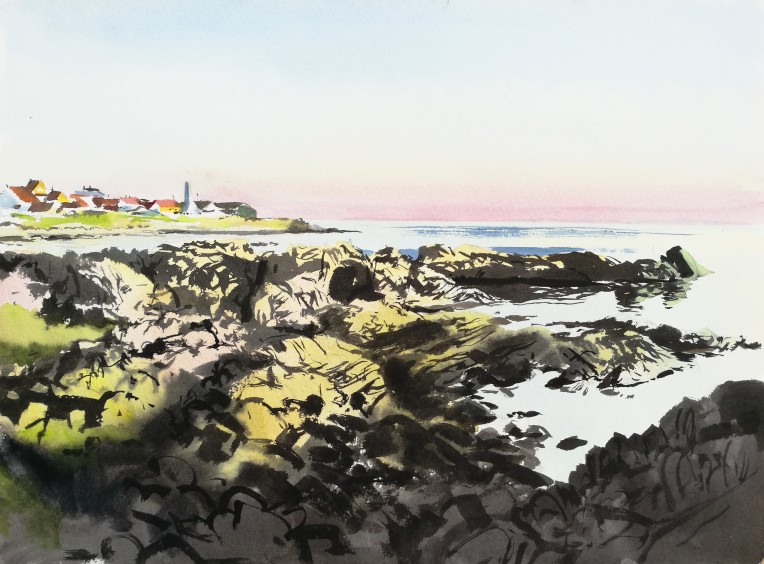 I had been checking the weather forecast all week, and I looked forward to a sunny and warm day. Already I had jettisoned my gloves, wooly hat and thermal flying suit, and still I felt overdressed and bogged down by all my bags and gear. I had been battling a cold all week and still felt a little under the weather. I found a small sandy beach between some rocks and set up my M60 brolly, under which – for the first and definitely not the last time – I took a nap. Woken quickly by a phone call, and cursing modern technology, I started a large painting of a large pinkinsh granite outcrop covered in splodges of mustard lichen. I struggled with paints drying too quickly and felt too tired to be able to concentrate for long periods. 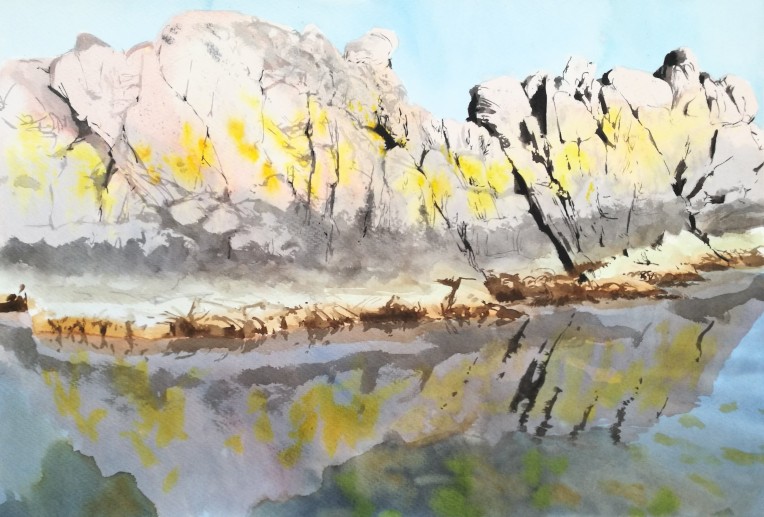 I started a smaller painting looking south, where fresh green shoots of grass dominated the beach. It was rubbish and I cursed myself for starting it in the first place. Returning once again to familiar ground I grabbed my telescope and watched some eiders, wonderfully lit in the deep blue sea. 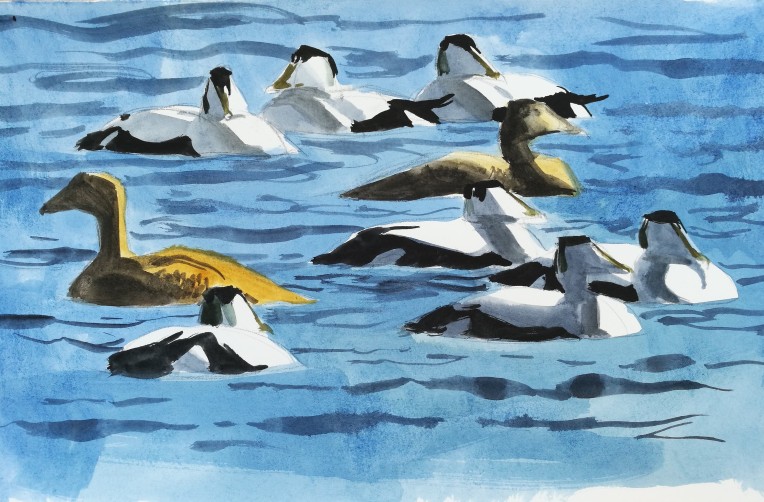 Eventually I wandered onwards, clambering over the rocky coast, between and over the endless granite outcrops streaked with basalt and splattered with lichen. Between some of these outcrops were tiny sandy beaches and in other places the granite had crumbled into crunchy pinkish gravel.  Further from the sea, there were rock pools surrounded by tussocks of tough grass and sea sedge, some of which were fed by small streams and springs – and in one of these pools, I found scores of smooth newts. 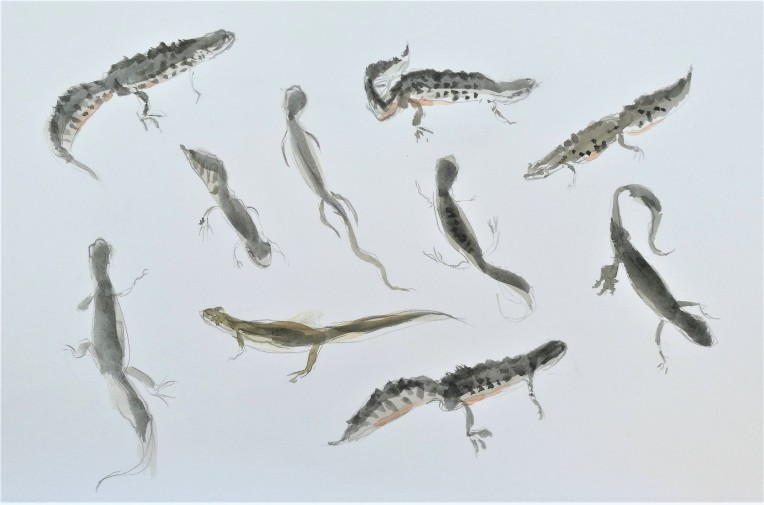 Discovering these pools immediately lifted my spirits, as I had spent a good portion of my childhood gazing at newts. I set up my chair by the edge of the pool and in no time at all I was transported back to that wonderful state where my contemplative non-thinking gaze somehow inhabits and occupies their amphibian universe. The newts were feisty and full of the joys of spring, and they cavorted and danced and mated and nosed about, as only newts can. There were common toads as well, one female somehow tethered by her string of eggs, as if she was unable to cut herself loose. Each time she moved off she was pulled back, her movements attracting the excitable newts who surrounded her like miniature crocodiles, pausing a while, before moving on.

I walked onwards over and around the bays and outcrops until I arrived at ‘Æggehønen’, a huge erratic boulder deposited by a retreating glacier – or thrown by an angry troll Kjestena on Chritiansø, who had apparently aimed for St. Ole’s Church but missed (see top).

By now I had completely run out of water and was feeling decidedly peaky. This section of the coast is unpopulated, save for some wonderfully situated but unoccupied summerhouses, and I was thinking I might have to walk all the way back to Allinge to get some water.  Just then, however, I bumped into a friend, who, as luck would have it had a summer house just around the corner. I stayed a while and listened to some local stories, before walking back a little and painting some common gulls, whose yelping cries were constantly in my ears as I walked around.

I walked onwards and through a small wooded area where the first white and yellow anemones and violets could be seen poking through a carpet of new waxy wild garlic leaves. Recently arrived blackcaps and lesser whitethroats chirped and burbled while a song thrush fluted from the top of an old ash tree. A little while earlier I had seen my first swallow – it was spring and I had decided then to paint some flowers, or at least some buds or green leaves. I managed to paint a willow (goat willow?) but again, felt too tired to concentrate, and wisely left the flowers for another time. 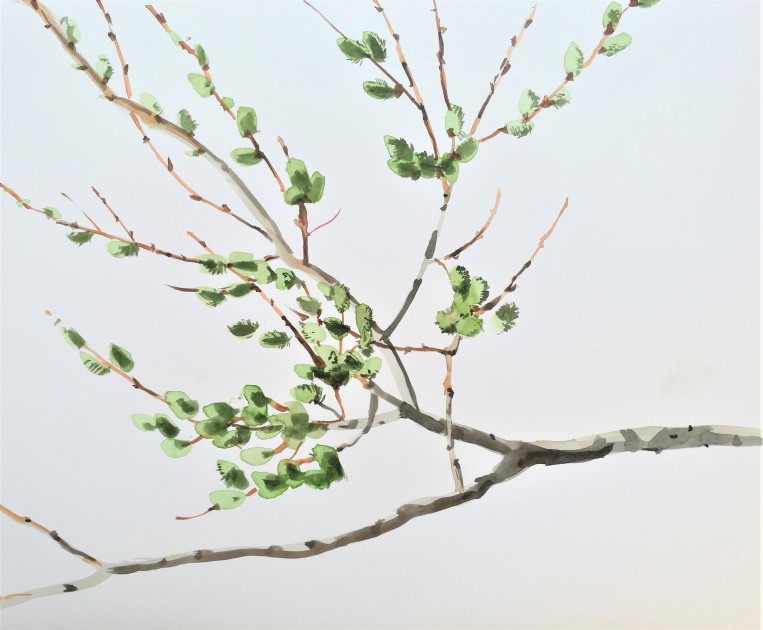 It was getting late, and I walked on to the day’s endpoint, Store Sandkås, a small sandy beach with a rocky outcrop. I spent a while looking for a good vantage point and eventually sat, exhausted, looking north west across the bay, as the sun set in the cloudless sky just to my left. I tried to capture the metallic pastel shades of the sky and water with the strange cat-shaped ‘ørneklippan’ in the distance, but the painting was another disaster (detail below)

At the end I sat there waiting for the sun to go down so I could go home… Just above me a group of swarming insects danced and swirled. Suddenly feeling creative again, I quickly unpacked my paper and followed the traces left by the insects with my pencil against the deep blue sky. Guided by the erratic movements of the insects and freed from the need to think myself and the desire to make a ‘good’ picture, I enjoyed drawing and managed to finish the day on a positive note.

Weather report = Sunny for all of the day. Temperature between 8 and 16 °C, perhaps up to 20°C in sheltered spots. Wind between 2 and 6 m/s from the southeast. Visibility: good in the morning, some sea fog over the sea. Hours of sunshine: 14 hours 30 minutes.

Lessons learned – painting in the hot dry sun is just as annoying as painting when it is cold/wet and so on – more comfortable, but not as exciting.

Other stuff = one of the disadvantages of being bird obsessed is that you miss all of the other stuff going on. The plants and flowers are a bit of a blank slate for me.

In my head = not much, mostly feeling ill. 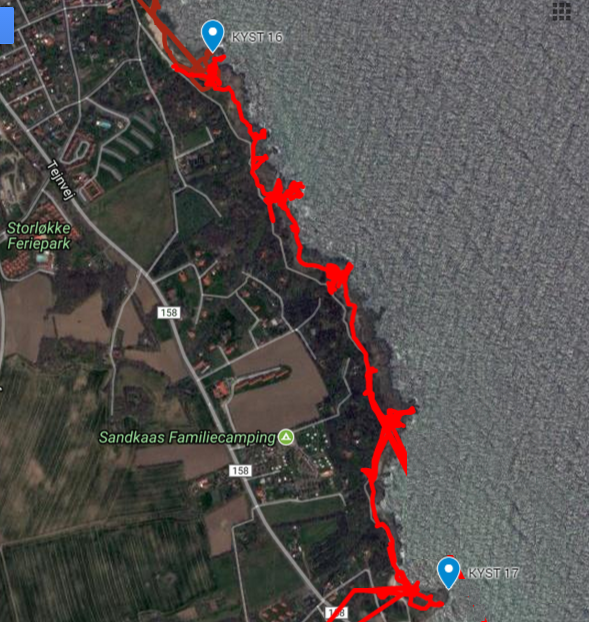